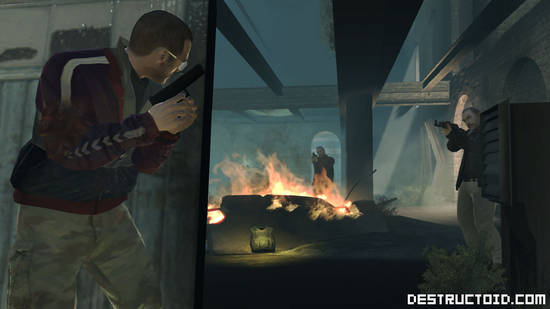 According to the British Board of Film Classification’s entry for Rockstar’s Grand Theft Auto IV, the upcoming Xbox 360 and PlayStation 3 title may have close to eight hours worth of cut-scenes. To be precise: “When submitted to the BBFC the work had a running time of 463m 0s.” That’s 7 hours and 43 minutes, folks.

Yesterday, Rockstar had Ron and I out to their New York City office to get some hands-on time with their highly-anticipated title. I’ll be getting some hands-on impressions up before the weekend (along with some screenshots, which I believe to be “new”). For now, I must say that some of the pre-mission cut-scenes were pretty extraordinary. While we only saw a handful of pre-mission cinematics, the combination of believable animations and Rockstar’s traditionally killer script writing helped me connect with the game characters in a way that I never had with those found in previous GTA titles.

So if there really do happen to be eight hours of cinematics (can I get a “holy crap”?), let’s be glad that they seem to be shaping up to be so damned good. While you all wait patiently for my impressions, I’ve included one of the (possibly) new screens that Rockstar has provided us. Enjoy.