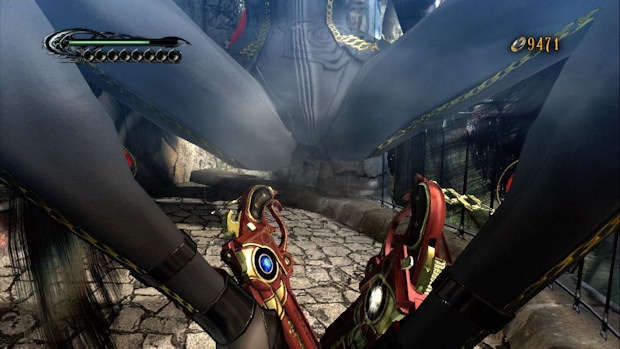 Comparison attack! Everybody loves it when two versions of the same game are pitted against each other in yet another grueling battle of the console wars, but at least this time there’s a valid reason for the contrast. There has been much talk of Bayonetta having a lesser PS3 version, first noticed in Japan and then intensified when developer Platinum revealed that the game shipping on Blu-ray will be a port carried out by Sega.

With the demo hitting both Xbox Live and the PlayStation Network in Japan, we took the time to download both samples and put them through their paces. I have played through the demo multiple times, and can now put all the cards on the table and answer the question that PS3 fans want to know: Does Bayonetta suck on the PS3?

Let’s see how the two demos stack up!

When the demos were first announced, it was revealed that the Xbox 360 would be getting two levels while the PS3 would only be getting one. While at first that looks like the Sony fans are getting a raw deal, don’t worry. The PS3 gets more of that one level, including two boss battles missing from the 360 version. Hence, both systems get the same amount of content, more or less. The content is just different.

Let’s first talk a little bit about the game itself. Bayonetta is fun. Ludicrously fun. The combat has a beautiful flow to it, with a focus on dodging and countering that is surprisingly simple, intuitive and satisfying. Unlike Ninja Gaiden, where players are overwhelmed and punished with cheap shots and unblockable attacks, Bayonetta instead encourages and entices the gamer. It’s challenging, but very fair, and players will feel like a badass simply through pressing a few buttons.

The combo system is, in a word, amazing. The game has been designed so that every single combo leads to something cool. You can button mash and Bayonetta will still do unbelievable and crazy things, like summon giant boots made out of hair, or pistol whip an enemy while shouting “Naughty” at him. In short, Bayonetta is a brilliant, sexy, unpredictable game that and I’m beyond excited to get to the full version.

Now for the messy stuff. I’m going to get this out of the way right now: Bayonetta is clearly inferior on the PS3. Right from the outset, somebody who has played both demos will notice the difference. The colors are more faded and the contrast less defined on the PS3, with graphics that lack the vivid sheen that the 360 version has. It’s certainly no dealbreaker, but the color is quite noticeably drained and it’s hard to go from the 360 to the PS3 without it poking you in the eyes.

Furthermore, despite the claims that the PS3 version is running smoothly, I almost instantly noticed a janky framerate when I started playing on Sony’s system, especially while jumping. Any quick movement of the camera will make the environment stutter, and it’s not something that lets up during combat either. The contrast between the two versions is clear. On the 360, everything runs consistent and smooth, remaining bright, clear and gorgeous throughout. The PS3 version, by comparison, is slightly stuttered and comparatively dreary.

One can easily tell that this game was designed entirely around the Xbox 360. Even the controls don’t feel quite as comfortable on the PS3, with the R2 button making a worse dodge button than the 360’s right trigger. Inexplicably, the manual camera control is also painfully slow on the PlayStation 3. Moving the right stick causes the camera to rotate around the titular heroine at a snail’s pace, and no reason at all is given for it.

The issues with the PS3 version are obviously far more noticeable to somebody who has played through both demos multiple times, but even a first-time PS3 player should be able to spot the framerate problems and muddy graphics. Of course, those in the dark will simply believe that this what Bayonetta is supposed to be like, when playing the superior version clearly demonstrates otherwise.

It looks as if the PS3 version of Bayonetta has been shortchanged with a painfully second-class port. Both in terms of look and feel, the Xbox 360 alternative stands out. It’s a real shame for PS3 loyalists, because it truly is a fantastic title. It’s just incredibly clear where the better game will be had.

The PlayStation 3 has been given a good spanking this time.