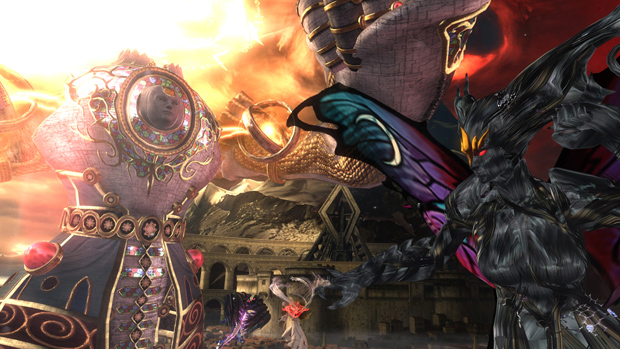 Get outta my dreams

Bayonetta kicked my ass last week, but I finished it (after giving in and switching the difficulty setting to Easy). I survived Gracious and Glorious, and sent you-know-who hurtling into the you-know-what. Damn, what a cool game. One of the coolest I’ve played in years.

But you know what’s even better? Bayonetta 2. Chris gave it a 10/10 and I’m inclined to agree.

While I intended to take my time with the sequel, I ended up burning through it, unable to resist seeing what the next chapter had in store until, whoops, those are the end credits, aren’t they?

I got out of my comfort zone, took that chance, and my prior apathy for this series has shifted to something unexpected: passion. I implore any of you with a Wii U to at least try the demo, even if you aren’t typically into third-person action games or think Bayonetta’s head is too small for her body or whatever. Just try it (and, if you’re into it, go through the original game first).

Despite my attempts to move on to Hyrule Warriors and whatever else I left hanging, I can’t seem to get Bayonetta out of my head; it won’t leave. I close my eyes at night and see visions of breakdancing gun attacks and demons wrapped in hair. I picture Bayonetta (dressed as Fox McCloud, obviously) dodging centaur angels and retaliating with a slow-mo punchfest.

Bayonetta 2 has given me the Tetris effect, something I’ve experienced only a handful of times before (and never with Tetris proper). The last games to trigger such vivid imagery were Spelunky and Dark Souls before it. All three titles have challenging systems so meticulously crafted you can’t help but daydream about them. They’re elaborate puzzles to be broken down and solved.

I’ll never truly solve them, but if I play through enough scenarios in my mind, maybe I’ll come close.