It’s not too often we see a major publisher humbled. With the announcement of Battlefield Hardline last year, EA and Visceral Games were ready to release another entry in the epic and grandiose Battlefield series. But soon after, they decided to hold off, and push the rather ambitious title back to 2015. After taking in its criticisms and lumps from the original beta release, they figured this was one one title they didn’t want to botch.

Moving the battlefield away from the military setting, Hardline brings the combat to the cities and streets across the U.S. as the police and criminals battle for control. As the first Battlefield game not set in a military conflict, the developers at Visceral Games wanted to make sure they knocked it out of the park. And in order to do so, they had to put players first and listen to what the community wanted.

In a special preview session with their second upcoming beta, playable on February 3-8, EA invited Destructoid out to get some early hands-on with it, where we had a chat with Battlefield Hardline‘s executive producer Steve Papoutsis. During our talk, we learned what they took in from its initial beta, and how important it was to give the best of what the series is all about. 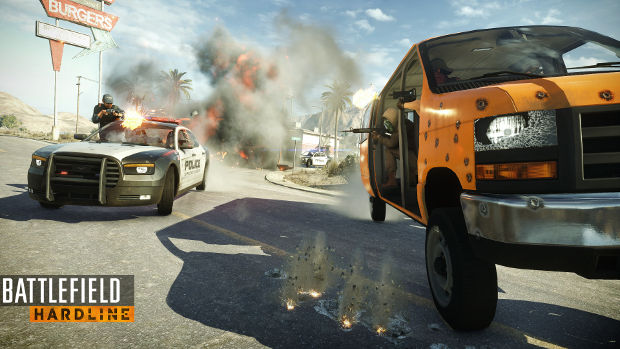 “It’s challenging in the sense that with making videogames you kinda open yourselves up to a lot of feedback,” said Executive Producer Steve Papoutsis while recalling the reaction from fans after the release of the previous beta. “Some of it warranted, others just hypothisizing about what you’re doing, but our approach was from day one was to give the players the game and let them try it — and with their help, build a better game.”

Coming off of their official reveal back at E3 2014, the developers at Visceral Games unveiled the release of a playable beta for all to play. While a lot of people were excited to see a different and pretty unique take on Battlefield, there were definitely concerns with seeing another title so soon after its predecessor. And with the reaction to their beta being a bit mixed to say the least, the information and affirmations they acquired from fans proved to be highly beneficial for them. The following month, they decided to delay launch for several months to fine-tune the game, and get it to where it needed to be.

In light of what happened to the launch of Battlefield 4 back in 2013, which a lot of people still remember and hold a grudge for, it’s certainly respectable, if bold, for the massive giant that is EA to hold off on releasing its next tent-pole title. But Papoutsis cites current leadership at the publisher and the developer’s desire to go beyond what was expected as a major source for their decision to hold off on releasing.

“When we announced at E3, we did something pretty different and we were pretty adamant about showing and letting people play it,” said the executive producer. “Instead of just announcing it, we wanted to put it in people’s hands, because we knew there were just a ton of Battlefield players and there were would be a lot of questions and skepticism. [….] And honestly, I kinda look at the feedback with a lens of these are passionate people about what the team is doing — and that’s really special to have people out there who are really invested in what the team is doing.”

“We got a ton of great feedback  [from the first beta], and we got so much feedback that when we sat down as a team and look at it all, we quickly realized that we wouldn’t be able to action upon it at all with our original ship date (back in October),” said Papoutsis. “And when we realized that, we had a great conversation with Andrew Wilson (CEO of EA), and part of his vision for EA right now is to really put our players first. So once he understood that we as a team didn’t have time to action on that feedback, he and the company were very supportive in giving us more time.”

A number of these changes are both sweeping and subtle. For instance, movement is much faster, vehicles are a bit more vunerable, weapons have more weight to them and damage output has been tweaked, class and perk abilities have been tweaked for balancing, and entire gameplay modes (such as Heist) have been given revisions to find an even stronger element of fun. And now on the eve of their final beta release, Visceral Game certainly feels confident that its title has gotten ‘there’. ‘There’ being the place that all Battlefield players want the game to be. During our time with the new beta, we got the opportunity to play through several 32 player matches set across three modes, Hotwire, Heist, and Conquest. 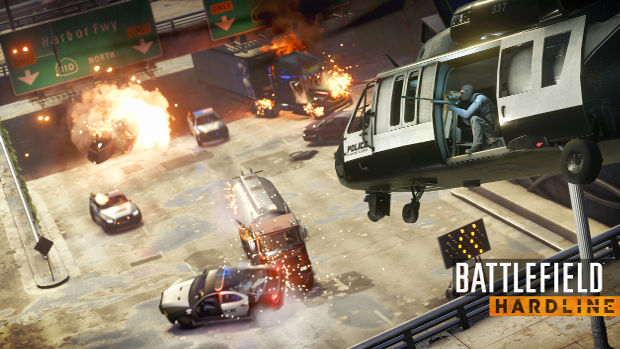 In the four hours I had with Hardline, I found Heist and the tried and true Conquest modes to be my favorite. Like past BF games, Conquest pits players against each other on large maps as they battle for control of territories. This mode feels great with 32 players (and even better with 64), and the new style and personality that Hardline goes for really shines. Set on the Dustbowl map, which is a large desert community that occasionally gets hit with sandstorms, police were raiding the criminal’s meth operation and had to secure the territory. There’s a stronger narrative context to missions, which is something I really dug.

With the Heist mode, you can finally recreate the same thrill of Heat‘s bank heist scene. Set on the Bank Job map, the crooks obviously have to plan out their attack and raid a bank, while making it to drop off points and securing them for helicopter pickup. Of course, the cops have to make sure they don’t succeed. Heist was a real blast to play. I got a serious rush from blasting open the vault doors, while covering my exits from the police. And the other side is an entirely different experience. With police having the outside of the bank to mostly themselves, they can organize and keep an eye on the drop off points to take out wandering crooks. It definitely felt like the most complex mode in the beta, and it’ll be interesting to see how heists turn out for different players.

Unfortunately, I didn’t find myself enjoying Hotwire too much. In this mode, you have to secure vehicles, which serve as mobile capture points that give teams respawn tickets. In theory it seemed cool, and I was excited to get into chases, but in my experiences I often found myself making laps around the map in the stolen vehicle without anyone on the enemy team coming after me.

The dynamic seemed to focus around the hot spots and choke points on the map, and if you stay away from the action, then they’ll likely ignore you for closer targets (and there are plenty of cars to go for). Don’t get me wrong, there were definitely fun moments and I certainly had a rush t-boning an enemy controlled vehicle and having my teammates pump it full of lead, but the ‘down time’ during Hotwire felt really weird and a bit awkward. 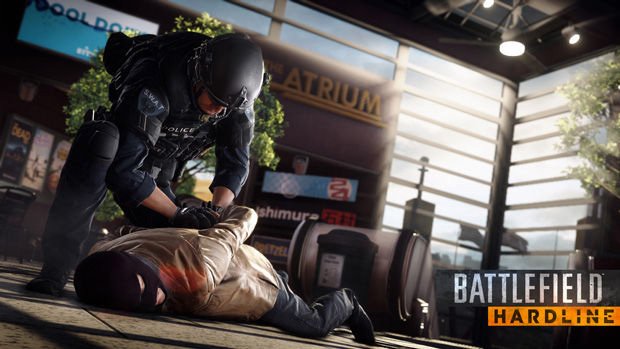 One aspect of Hardline that feels especially unique is that there is a stronger difference between the two factions. Stylistically, cops are far more by the book and stoic in the line of duty. While the criminals use harsh language and exude more attitude while on the job. Moreover, the type of weaponry and gear they use differs from the other side. The cops use high-tech weaponry and military-esque gear, while the criminals use makeshift gadgets and black market gear to get the job done. Of course, one side isn’t at any particular advantage over the other, the differences here show of a greater level of personality not found in previous Battlefield that featured generic soldiers.

“The idea of cops and robbers is something that a lot of people play, so we had a goal when developing this game was to make it feel very different.,” said the executive producer. “A traditional military game takes place in military engagements, and they often put players at very far distances from each other, and there’s no communications between opposing sides. But a lot of the interesting cop movies and TV crime dramas, a lot of what makes them interesting is the dynamic between the two factions [Police/Criminals]. It creates interesting dialog, sometimes humorous, sometimes really tense, but that shows an inherent difference between the settings.”

Customization is a staple of Battlefield, and Hardline definitely keeps with the tradition of allowing players to model and define their own character loadout. One of the criticisms from the previous beta was that factions could use weapons from opposing sides, as in a police officer could bring an AK or molotov cocktails to a fight. Which doesn’t make too much sense considering the type of firepower they have.

To remedy this, the developers introduced the Weapon License feature. As you rank up and gain proficiency with gear, you’ll be able to unlock the right to use weapons from opposing sides and other rare guns for your character. You want your criminal to be decked out in SWAT weaponry? You can do it, but you gotta earn it. 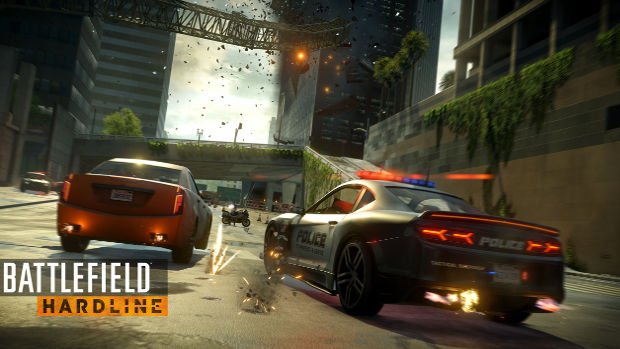 Another returning feature from previous games is the Commander mode. Now called Hacker mode, players can take position as an overseer within the battles, helping their team with boosting scores, hacking control points, spying on the enemy from security cameras, and even hindering the opposition with jamming skills. Playing Hacker wasn’t really my thing, nor was it in the previous games, but anyone who’s comfortable with Commander will feel right at home here, as the challenge of balancing skills and keeping an eye on your team is still there. Just make sure you know what you’re doing. There’s nothing worse than having a newbie on overwatch.

With the beta period lasting only six days, this week is your last chance at giving Hardline a shot before its release in March. The folks at Visceral Games have certainly put in the work, and with the amount pressure on them now, especially considering it’s coming after the ill-fated BF4, they certainly feel the need to deliver. I had a blast with the beta, and I definitely would’ve put in more hours if I could. Hardline feels much faster, and far more tighter than previous titles, while still retaining the scope and ‘epicness’ that the series is known for. And no, this doesn’t feel like a mod or re-skin. Perhaps its first beta did, but now it certainly feels like a title that can stand on its own.

While I wished I would’ve liked Hotwire more, since its one of the original features that’s coming with Battlefield Hardline, the remaining modes certainly live up to the series’ pedigree. Playing Hardline‘s conquest mode with 64 players was an incredible rush, and experiencing the map specific changes was incredibly fun. If you were one of the many who just couldn’t get down with the original beta, then this new and improved take might just win you over. The changes were like night and day compared to the original, and it’s very reassuring to see the game in pretty polished state. And that’s a lot more than could be said about Battlefield 4‘s launch state.