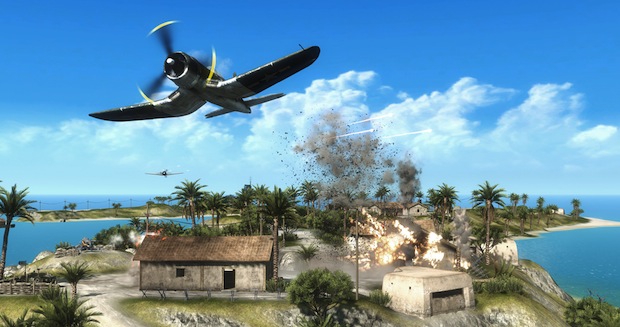 We just can’t get away from World War II in our war games, can we? According to an ESRB’s description, the upcoming Battlefield: Bad Company 2 is going to begin in World War II and then progress forward in to the modern day and age.

If you’d like it straight from the judgmental horse’s mouth here it is: “In single-player mode, players conduct missions on an unnamed Japanese island during World War II and then move into the modern day through jungles, deserts, and snowy terrain.”

The Battlefield series has been all over the place in time spectrum, so this isn’t that surprising. However, it could be EA DICE testing the waters of the WWII setting once again. Maybe it’s actually tying in Battlefield: 1942 to the storyline. That would fit with the island theme. If I had to put money on something, I would wager that the early WWII level(s) is actually just the tutorial stage, and won’t actually have that much to do with the plot of the game, but we shall see.