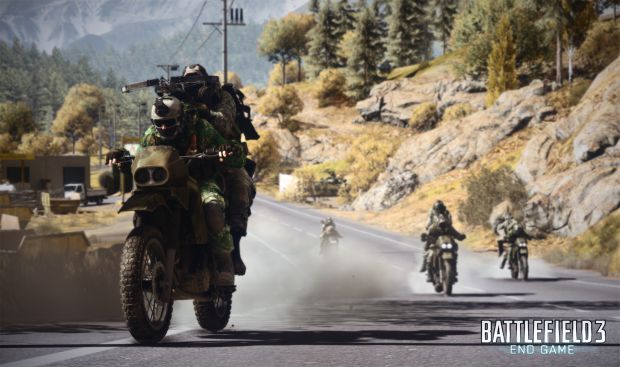 Battlefield 3’s End Game downloadable content is almost here! Battlefield 3 Premium members on the PlayStation 3 get the content first this week on March 5. Then Premium users on PC and Xbox 360 get it on March 12. Non-premium PS3 users will then be able to buy the new content starting on March 19. Xbox 360 and PC users can finally buy the DLC on March 26.

The final DLC will include four new maps each based on a different season, two new transport vehicles that each have an AA device on them to fight against air units, a dirt bike for super fast gameplay, a new dropship that teams can control as a mobile spawn point, and the return of Capture the Flag and Air Superiority modes.

I played through End Game last week at EA’s offices and the two new modes are pretty fun. Air Supority sees everyone in jets having to control three key points in the air in a 12 versus 12 setting. CTF is pretty fun too, largely thanks to the dirt bikes. You have to stand on the flag for a few seconds before stealing it, and you can only score when your own flag is back at base. Plus, both flags always appear on everyone’s radar, so no hiding here.

There’s a bunch of new dog tags, Achievements/Trophies, and new Assignments as well. Finishing all the assignments will actually unlock a new gun, the M1911 S-Tac that features a flashlight and silencer. This gun was previously a DICE only weapon and is being released as a reward to fans that have stuck out with Battlefield 3 for this long.