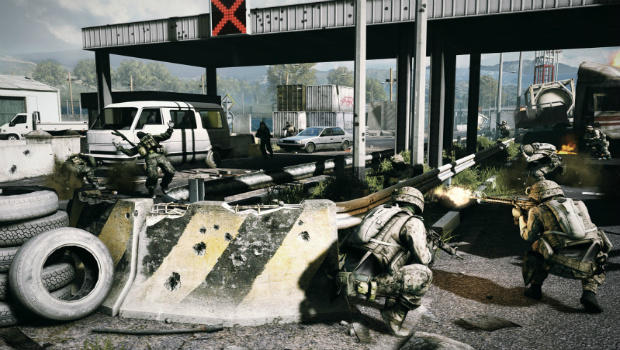 DICE has been kind enough to throw us a bone in the form of some more multiplayer information on Battlefield 3. Unfortunately it won’t make October 25 come any sooner. Damn it. At launch Battlefield 3 will have 9 maps which can be played in all 5 game modes. That amounts to 45 scenarios, which isn’t too shabby. The game modes are Team Deathmatch, Squad Deathmatch, Rush, Squad Rush and Conquest.

Team Deathmatch is a 12 vs. 12 affair focusing on infantry combat. It’s the simplest of the modes and a perfect place for new players to start or for people to jump right in. Squad Deathmatch pitches 4 squads of 4 against each other and includes an Infantry Fighting Vehicle (IFV) which can break deadlocks, but it will need to be kept in the game with the help of an engineer.

Rush has made the move from Bad Company to Battlefield 3. Attackers will have to progress through the map, arming and detonating pairs of M-COM stations to unlock the next area of the map and the next pair of stations. Once all M-COM stations are eliminated they win the match, however the defenders have unlimited spawns, while the attackers must destroy the stations to get more spawn tickets. DICE have altered the mode slightly during its transition including removing the possibility of the attacking team destroying the M-COM towers with gunfire or explosives. All vehicles are available in this mode, including jets and armored vehicles. Rush is for 24 players on consoles and 32 on PC.

Squad Rush is a more intense variant of the original. The rules are the same, but the two teams are reduced to 4 players each and it’s purely infantry based. There are only two bases with one M-COM station per base, which makes both of them vital. Due to the small teams it’s important to have a well thought out squad and will likely be best played with a group who knows each other’s strengths and weaknesses.

Conquest is the classic capture and hold mode which I personally favor. It’s a 24 player battle on consoles and 32 or 64 on PC. Conquest will be set over a series of large maps and allows players to experience “all-out vehicle warfare.” By capturing and holding flags players can drain the opposition of tickets just as they can by killing enemy players. Obviously the first team to lose all their tickets loses.

You can tweak the settings of these modes, like selecting “infantry only,” which removes all but transport vehicles from the map or “Hardcore Mode” which minimizes the help you get from the interface. And with that I’m going to get back to not playing Battlefield 3 and thus remaining unfulfilled.