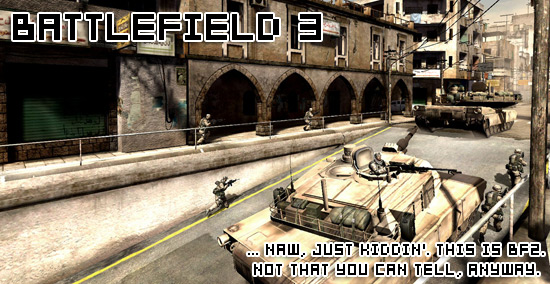 According to Digital Battle info on the inevitable sequel to the Battlefield series — Battlefield 3 — has been leaked via mysterious tipster. According to the tip, the game is scheduled to hit stores late next year with a possible public beta this coming summer and the usual teaser trailers hitting your local Internets in January.

Of course, the list of features — which you can find after the jump — should be taken with a grain of salt until we get official confirmation from either EA or, let’s say, Jesus Christ, but everything here looks pretty plausible. Unfortunately, its plausibility is directly proportional to just how similar everything sounds to previous Battlefield games. In fact, if you had read this list of features to me yesterday, I would have assumed you were talking about the futuristic Battlefield 2142, or my long-planned video game based on the Iran-Contra scandal Reaganocalypse: Hot Jungle, Cold Steel.

Hit the jump for a whole wad of theoretical features.