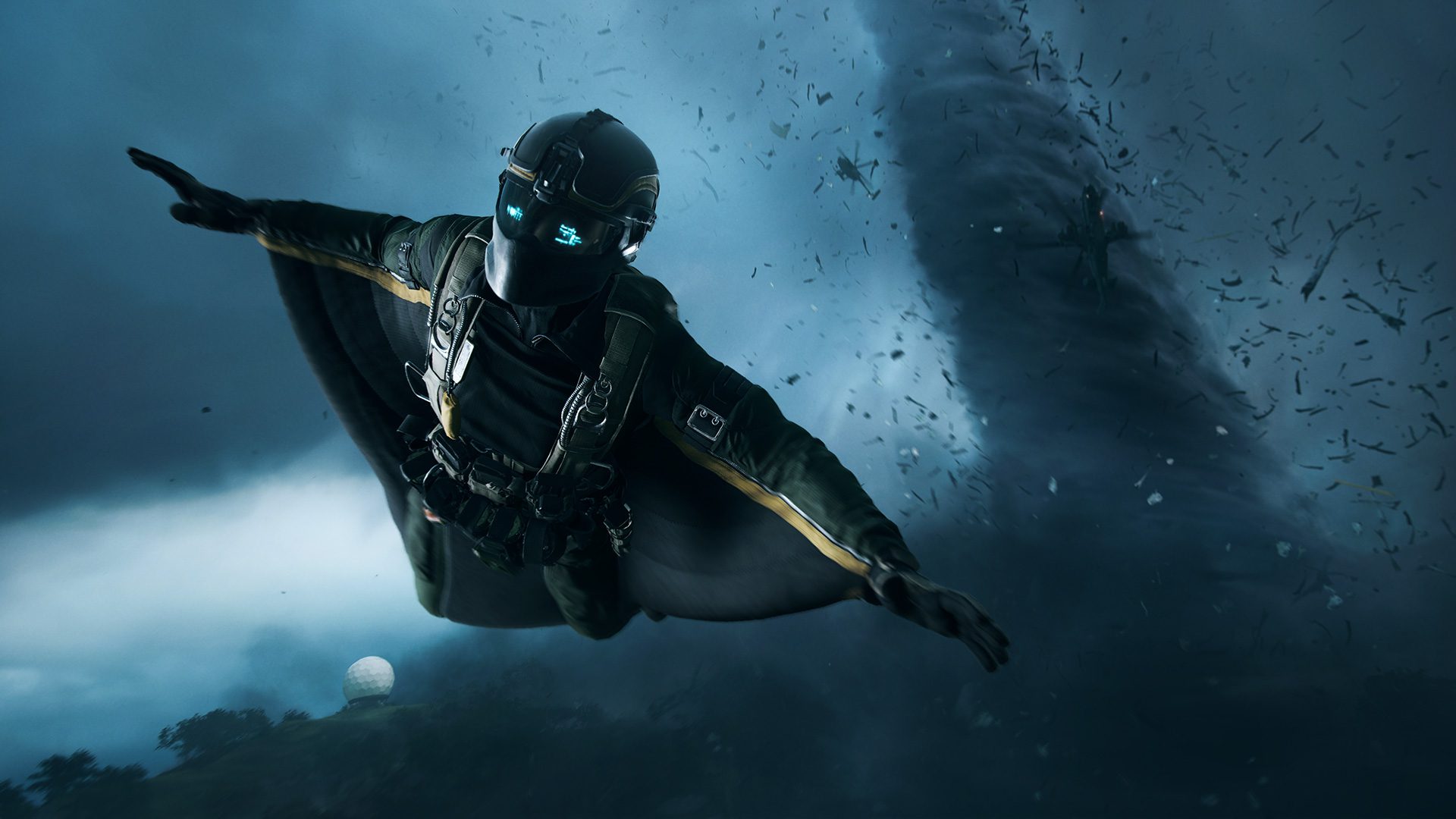 First impressions of the multiplayer-only game

Ahead of E3 2021 this morning, DICE lifted the lid on Battlefield 2042, a not-too-futuristic successor to 2018’s World War II game, Battlefield V, with 128-player support.

After recently attending a hands-off reveal event, I’ve gotta say, I like what I’m seeing and hearing — conceptually, this could be a “return to form” for fans who enjoyed the recent WWI and WWII bouts but ultimately missed the flow and feel of more modern combat.

The series has been jumping all over the place with these names and settings, but at first glance, Battlefield 2042 immediately calls to mind Battlefield 4 — a smart move.

If I had to sum up the direction of this year’s game (which is due out October 22 across PC and current/last-gen consoles), it would be large-scale sandbox shenanigans in a near-future setting. In the presentation I attended last week, the developers said they’re focusing on what they do best — multiplayer — and they’re leaning into weather elements like a tornado, flashy stage hazards like a (failed) rocket launch, and room for 128-player matches across some of the “largest maps” yet for the Battlefield series.

With visions of Battlefield 2142 walkers potentially in your head, I feel like I should clear the air: I didn’t see Elysium exoskeletons or anything. I did spot one of those robot dogs sprinting with a gun mounted on its back, to say nothing of wingsuits and hovercraft. 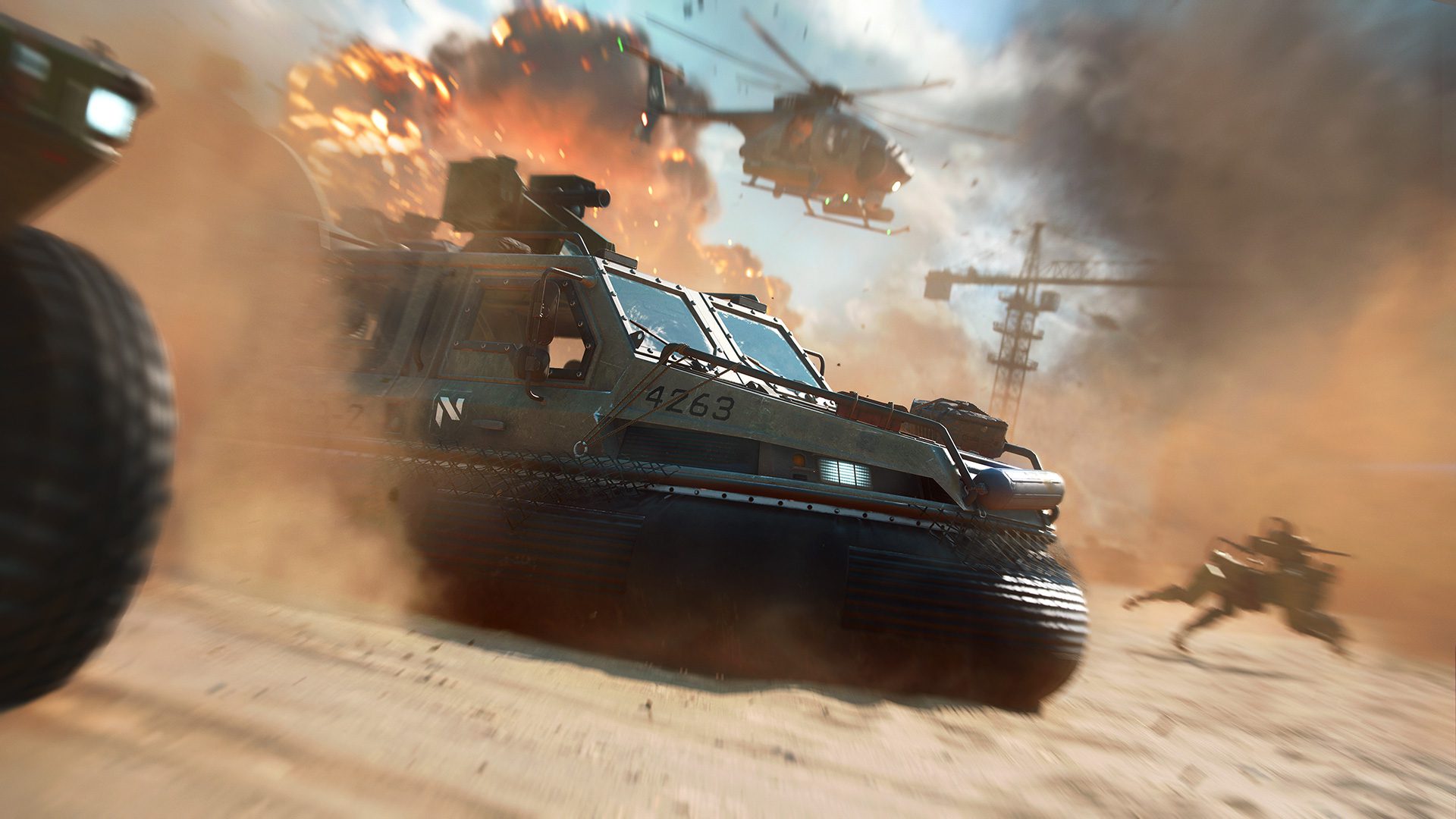 According to DICE general manager Oskar Gabrielson, 2042‘s story elements will surface through the game world over time. In other words, there is “not a traditional single-player” mode like we’ve seen in recent Battlefield games. In terms of world-building food-for-thought while we’re out there squading up with our guys and gals, the central conflict in Battlefield 2042 has to do with food, water, energy, and refugee crises brought about by climate change. As nations fall apart, the United States and Russia have begun using specialists — the so-called “Non-Patriated” — who functionally serve as classes.

So far, DICE has shown four of the ten named specialists lined up for launch, and yes, that’s as good of a time as any to mention that Battlefield 2042 will have a free and paid battle pass. (Expect new locations and maps to be accessible in the free tier, as well as a seasonal cadence for major updates that “push the narrative of the world forward.”)

Not coincidentally, the specialists are familiar stand-ins for the Recon, Assault, Support, and Engineer roles. Every specialist can use any gun and there’s also flexibility with grenades and secondary gadgets, but their primary gadget will be locked in, and they’ll have differing traits. Some examples: a Recon Drone that can hover in place to tag soldiers or be manually piloted, a Sentry Gun, a Grappling Hook, and a healing Syrette Pistol.

Each specialists’ trait goes hand in hand with their main gadget in ways you’d expect. For instance, Maria Falck, who fits the general support role, can revive teammates at full health. Pyotr Guskovsky, an engineer, can bolster his sentry so that it spots targets faster. Beyond those class choices, everyone can alter their weapon mid-combat — a new “Plus System” lets you easily switch your scope, barrel, ammo, and under-barrel attachment without needing to pull up a menu. Considering how large the maps are going to be and how different sections will call for different playstyles in the same match, that’s ideal. No surprise here, but we don’t have a full picture of every facet of the game just yet. Marketing rollouts — you know the drill. Today’s just the pre-E3 introduction.

The focus so far has squarely been on All-Out Warfare, which houses returning modes like Conquest and Breakthrough. There’s also the mysterious Hazard Zone, a “high-stakes, squad-based” experience that supposedly feels distinct from All-Out Warfare and “is not a battle royale.” The third pillar of 2042, as it were, is yet to be named — but it’s a “new game-type for the franchise” developed by DICE LA as a “love letter to Battlefield fans.”

I like what little I’ve seen of All-Out Warfare, though. In terms of maps, it’ll have seven at launch. A few that stood out were a South Korean cityscape with canals and ziplines (Kaleidoscope), a close-quarters Indian shoreline with stranded ships (Discarded), and an agricultural tech center in Egypt that’s half desert solar park, half greenery (Renewal).

What about the PS4 and Xbox One versions? Battlefield 2042 is coming to those platforms as well, but not without trade-offs. I can’t speak to the visuals or performance at all, but DICE was clear that last-gen consoles will be limited to 64 players, and the sprawling maps will be tailored to accommodate these smaller skirmishes; we were told the gameplay and dynamic events like player-snatching tornadoes will still be featured. I’m also curious to see the AI in action. This time, we’ll be able to play against AI soldiers in modes like Conquest and Breakthrough, whether that’s totally alone or with your squad. DICE suggested that it has wanted to incorporate this before as a way to ease players into Battlefield PvP, and now they’re doing it with 2042. I hope they pull it off.

The next major reveal will happen at EA Play Live in July — expect to see the DICE LA-developed slice of the game — and Battlefield 2042 will get an open beta this year.

There’s no telling how everything will pan out, especially after the way Battlefield V fell short of post-launch expectations, but I’m feeling more confident. If absolutely nothing else, the bread-and-butter Conquest mode should have the sort of big-picture chaos I want from Battlefield, albeit on a grander scale, and I’m ready to return to contemporary combat that feels more in line with Battlefield 3 and 4. This seems to be on the right track.