Being developed by BattleCry Studios

In October of 2012, Bethesda Softworks opened a new development studio named BattleCry in Austin, Texas. At the time, we didn’t know what the team was tasked with, but certain job openings hinted toward a free-to-play multiplayer game. Today, the curtain has been pulled back to reveal BattleCry — a game titled the same as the studio that’s creating it — and our suspicions of almost two years are confirmed.

BattleCry is a highly-stylized, third-person, 32-player, team action/combat title that’s designed to make noise in the free-to-play space. According to design director Lucas Davis, BattleCry kept fans of shooters, action, and multiplayer games in mind when creating the game. This came off as a somewhat odd statement. That’s because the latter two mentioned by Davis are well-represented, but the shooter aspect is mostly missing.

There’s a very good reason for this. BattleCry takes place in a world where guns simply don’t exist because of the Black Powder Treaty — an agreement banning gunpowder. This gave rise to the Pansophic Revolution, a golden age of industrial manufacturing and design which changed the face of battle. Because of the Pansophic influence, war would only involve elite teams of highly specialized warriors. As a result, BattleCry‘s methods are mostly melee-centric, with the likes of swords and daggers inflicting most of the damage.

In BattleCry‘s fictional realm, there are at least three factions that will vie for world domination. In our hands-on demo, we were introduced to two of them — the Royal Marines and the Cossack Empire. The Royal Marines can best be thought of as personified by the British Empire, majesty and discipline being their defining traits. On the other hand, the Cossack Empire are a courageous and fierce lot. The developers commented that more factions will be revealed in due time, promising at least one.

However, the difference in factions is more than simply a name. There are five classes that remain uniform across the clans, but care has been take to make each variation feel distinct from its counterparts. BattleCry’s trying to achieve this by changing cosmetics surrounding appearance, weaponry, etc.

Of the five classes, three of them were on display during the demo. The Enforcer is a tank-like character that can use his sword as a massive shield, the Duelist is a quick assassin-type with the ability to cloak, and the Tech Archer is suitable for long-range attacks and has the ability to fire a barrage of arrows at once. The two classes that we weren’t shown are the Gadgeteer who is a support class, and the Brawler who was simply described as “melee-oriented.”

Despite the fact that BattleCry takes place as separate incidents — isolated battles in different WarZones — there’s a larger meta game taking place. The factions will all take part in The War Effort, which is a struggle to take over and control different parts of a greater map through individual victories. Bethesda didn’t elaborate much on this, but I got the sense that it would be similar to 2012’s Hybrid in this sense. 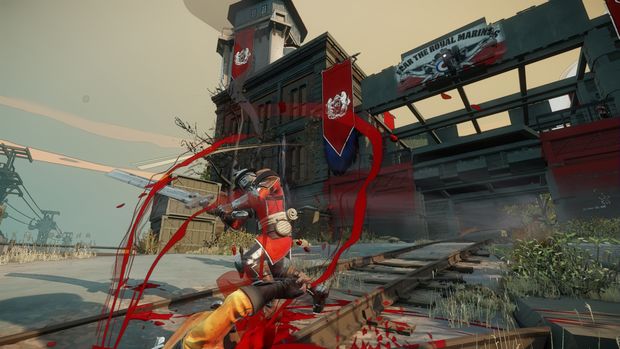 At its heart, BattleCry‘s centered around the accumulation of iron, which acts as XP to unlock new abilities and customization options. Of course, being free-to-play, there will be some sort of monitization model in effect, but Bethesda was unwilling to go into detail. It was noted, however, that one of the options that players will be able to pay for is the ability to change the gender of their character (not all characters are male by default).

For those that intend to play through BattleCry the old-fashioned way and earn their iron to advance, there are a few ways to do this. The most direct is to simply kill the opponent. To assist in combat, BattleCry employs an Adrenaline system that can be used little-by-little to give small stat boosts, or all at once for the Ultimate Ability, which grants “superhuman-like powers for a short time.” To promote good sportsmanship, BattleCry’s also included the option of saluting and commending opposing players after a match for some extra iron.

From the five (or so) matches that we got to see, BattleCry looks like it’ll be the perfect title to scratch an itch that a sizable portion of players have. It’s easy to jump into, and it’s very fast-paced. Right now, the combat is a bit unbalanced, as the Enfocer seems rather over-powered, and the team that roved in the largest packs was usually the one to come out on top in any given scrum. However, there’s plenty of time and a lot to add until BattleCry moves to beta in 2015. If they can get the balance a bit more on track, there’s no reason that BattleCry couldn’t be a great option in the free-to-play space for players that just want a bloody, mindless good time.