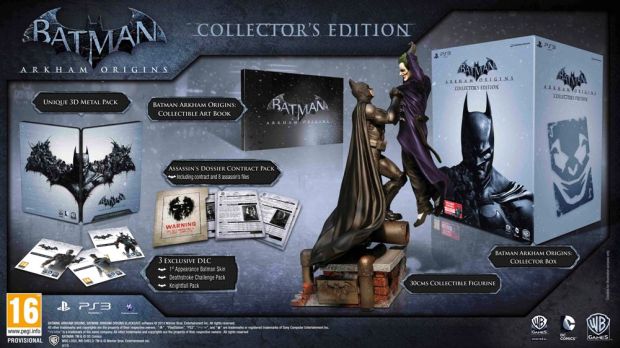 And it’s just for you in the United Kingdom

So I’m pretty sick of Collector’s Editions for the most part, but I have to admit I want this one for Batman: Arkham Origins. Largely because the Batman and Joker statue looks pretty awesome.

The package also contains an 80-page hardcover artbook, files on the eight assassins plus Black Mask’s contract, the first appearance Batman skin, Deathstroke challenge pack that includes two challenge maps and two Deathstroke skins, and a 3D metal pack. That’s for the both the Xbox 360 and PlayStation 3 versions, while the PS3 version will also include the Knightfall pack as an exclusive.

This will be available on October 25, 2013 in the United Kingdom, and will retail for £79.99. The North American Collector’s Edition will be announced next week.