[Spoiler Warning: There are spoilers for Batman: Arkham City in here. Obviously.]

I’m on the prowl, looking for any openings in the enemy’s defense. Methodically, I pick them off one by one until the coast is clear and the way forward revealed. I’m caught off guard by the intimidating Mr. Hammer and get jumped by him and his sizable squad of goons. With my Remote Electrical Charge and other gadgets in hand, they too prove no match for me.

Finally, I climb my way up to a shanty wooden hideout, greeted by the sound of sobs. There is Harley Quinn, with no witty remarks, just a face full of tears as she cries over a lifeless body. Using Detective Mode, I confirm what I refuse to believe. The lifeless body of the Joker sits in a wheelchair, flatlined. Did Rocksteady just kill off the most iconic comic book villain of all time!? 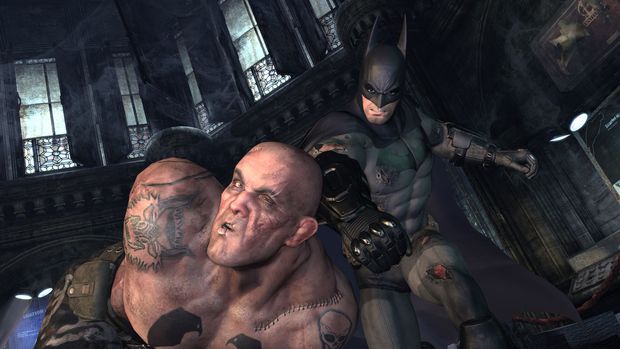 For those that have been following the demos, trailers, and other coverage released up until now might have noticed that each new demo picks up right after the other, telling a continuous story. For those not up to speed, here’s the super short version: Batman saves Catwoman from an angry Two-Face. Batman saves Catwoman again from a sniper’s bullet. Batman investigates where the bullet was fired from and finds a remote controlled sniper rifle, booby-trapped, in a bell tower nearby. Batman escapes the subsequent explosion. Got it? Great!

Our demo picks up right after the escape, with the Caped Crusader tracking the Joker gang’s radio chatter to find the crazed clown’s hideout. Perched atop a gargoyle, we get a great view of the size and scope of Arkham City, coming in at about five times the size of Arkham Island. True to the form of the first game, the city is filled with nods to Batman lore and history. Just gliding over to the next mission objective, I ran into two Riddler puzzles, a poster of the Flying Grayson’s circus act, Maxie Zeus’ tower, and a Bane sidequest. I could even see Arkham Island from the part of the city I was in. 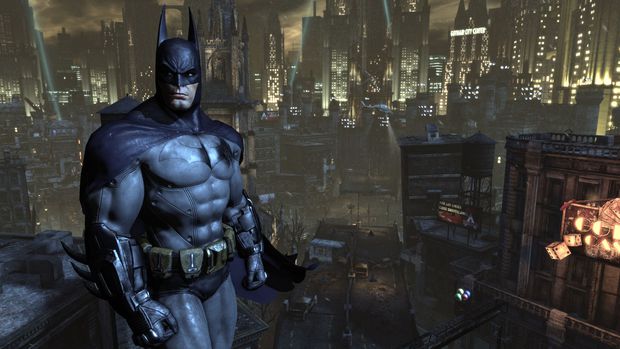 While Rocksteady’s Dax Ginn made it clear that this is not a sandbox game per se, the greater size of the game world opens itself up to sidequests and other sandbox-like features. For instance, feeling a sense of personal responsibility (go figure) for the creation of the the Titan formula in the events of the first game, Bane enlists the help of Batman to destroy the twelve crates of Titan formula that made it off the island. Batman goes for six and Bane grabs the other six. For some reason, the Tiger security forces don’t like that idea, and completing this quest results in Bane and Batman fighting side-by-side against Tiger mercenaries. Of course, you could just skip sequences like this entirely, but you will miss out on valuable XP and story elements.

Jumping back to the main mission, we close in on Joker territory and sneak on the rooftop rather than kick in the front door. Bullets still do crazy amounts of damage, so directly confronting enemies is still ill-advised (unless they only have melee weapons). On the rooftop of a foundry, Batman checks in with Alfred (similar to how Oracle assisted players in Arkham Asylum) for help on the best entrance into the Joker’s main hideout.

Entering through the foundry chimney, I traverse through a labyrinth of cold air vents and narrow nooks and crannies, taking extra care to not fall into the superheated steel below. It’s here that I noticed differences from Arkham Asylum in the traversal. Maybe it was the relative linearity of this section, but moving around felt much more intuitive. I never got lost or stuck, and when I did, it took me very little time to get back on track. 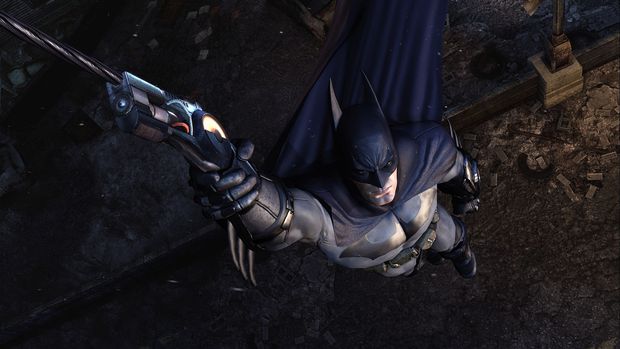 The voice work assists quite a bit here as well, as Batman will talk to himself and subsequently the player (quite a lot) on the best way to move forward. It’s an old — some would argue cheap — design choice to keep players on track, but what’s really the alternative? Probably just needless frustration. Combine this with the always handy Detective Mode, and the challenge (at least in this demo) remained in how best to complete tasks rather than how to get to them. I sometimes found myself confused in even the tighter spaces of Arkham Asylum, but I didn’t have that problem here.

After making it through the foundry, I watch from the courtyard sewers as Joker’s gang round up a prisoner for Harley Quinn. The poor soul is a doctor, selected by Harley to find out how to cure Joker, who has been severely weakened by the side effects of the Titan formula. I decide to stalk the lone thug who has a firearm, quickly dispatching him with a takedown and moving in to take care of the rest.

There’s a phrase that has been kicked around the videogame industry for longer than I can remember: “Easy to play, hard to master.” I found Arkham Asylum‘s free flow combat system to be one of the few systems to successfully execute on this highly revered tenet of game design. The same holds true here, as the combat feels as comfortable and challenging as ever. 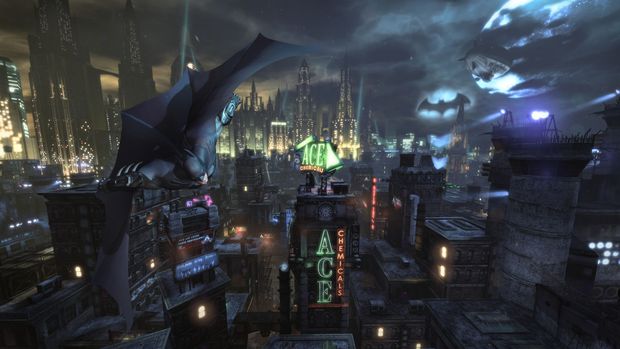 Gadgets are also incorporated this time around. By holding down the left trigger (on Xbox 360) and tapping the corresponding face button, you can use Batarangs and other gadgets, adding a another layer to the combat system. Gadgets can also be acquired from certain bosses (Mega Man style) after defeating them. The one I got to play around with was a freeze bomb that (surprise!) freezes enemies on contact. You rather obviously get this one after the boss encounter with Mr. Freeze, though Dax wouldn’t say whether or not the Mr. Freeze boss fight takes place before this sequence. He only cited the New Game+ mode, where players can take power-ups and experience points earned from a previously completed playthrough into a new one.

Moving on to saving the good doctor, I enter a room requiring traditional Predator gameplay for success. Apart from the new gadgets, the Predator gameplay seems largely unchanged from the golden formula struck in the first game, but a few subtle changes to the AI do refine the experience. Joking with us, Dax Ginn said that the team at Rocksteady “worked hard to make enemy AI more intelligent, but keep it appropriately dumb.”

It just sounded like a clever joke to me at first, but the philosophy made immediate sense once I dug in. Basically, sneaking up on enemies doesn’t require a huge amount of precision, and provided that you stick to silent takedowns while staying out of other enemies line of sight, it’s all smooth sailing. But if you get sloppy, get ready to contend with the more aggressive, more intelligent AI. Swinging from gargoyle to gargoyle isn’t the get-out-of-jail-free card that it once was, and if you swing back to a spot where the enemies have already spotted you, they will see you almost instantly. Luckily, my screw-ups were never too bad, and I was able to save to doctor before the clowns put a bullet in her head. 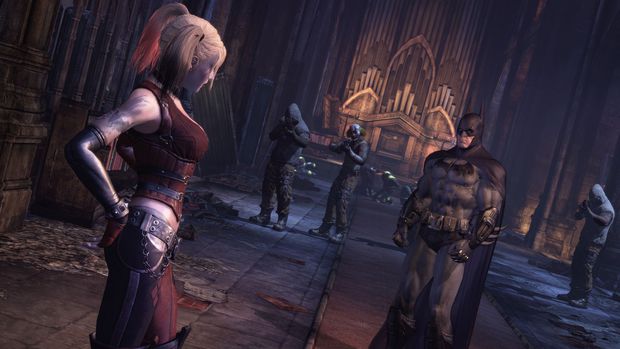 Speaking with the doctor, we learn of the Jokers worsening condition before heading back out to the courtyard with the newly attained Remote Electrical Charge (REC). The newest entry into Batman’s gadget library, this device charges electrical bolts that can be fired at range. In non-combat scenarios, it’s used to recharge control panels and for light puzzle solving. For this demo, I had to use the REC’s magnetic field to swing a wrecking ball hard enough to break an overhead door blocking my way.

After making my way up, I was suddenly attacked by the one-armed clown Mr. Hammer, most notable from his recurring appearance in the trailers. Here, I got a good opportunity to play with the REC’s combat capabilities. Against a normal opponent, the REC can send enemies in a frenzy, firing off their guns every which way or swinging their melee weapons into allies. Against Mr. Hammer, the results were almost unfair. Once he was hit by a shot from the REC, he went into a crazed rampage, hitting everyone but me. The ammo on this is unlimited too, so you can go nuts with it, so long as you remember that it doesn’t knock enemies out permanently or add to your combo count.

And at last it came — the end of the demo and a great look at one of my most anticipated games. How could they cap this off strong? Well, that’s when it happened. Dax turns to me, says he has no comment on what I’m about to witness, and the cutscene plays. I hear Harley Quinn wailing over a lifeless body, her tears flowing heavily and sincerely on a familiar purple suit. There lies the body of the Joker hooked up to an EKG, flatlined. My jaw drops. Even though Detective Mode confirms the legitimacy of the body, my every instinct tells me there is something else at work here.

I can not wait to play this game.