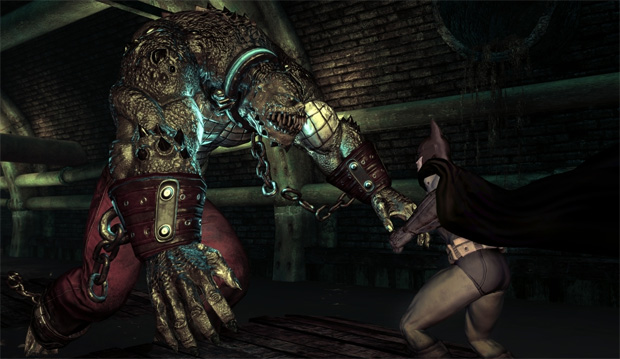 With Batman: Arkham Asylum less than a month away, I’m getting increasingly anxious. There’s been a bunch of solid trailers lately, but I can’t help but think about the controversy surrounding the game. True or not, I don’t really know what to expect from Arkham Asylum anymore.

Thankfully, we’ll all have the opportunity to get acquainted with the game: a demo for Xbox 360, PlayStation 3, and PC is due out on August 7. Based on the wording in the press release, it sounds as if the demo might just be Arkham Asylum‘s opening segment, but don’t quote me on that.

The PR also states that the demo will let players feel what it’s like to become the “WORLD’S GREATEST DETECTIVE.” How can you say no to that?

The consumer demo for Batman: Arkham Asylum™, published in the United Kingdom by Eidos Interactive, will be available for the Xbox 360® video game and entertainment system from Microsoft, PLAYSTATION®3 entertainment system and Games For Windows® LIVE worldwide on August 7. The full game will be available at retail stores nationwide in the United Kingdom beginning August 28th.

The demo will be offered on Xbox LIVE® Marketplace for Xbox 360 and PlayStation®Network for the PLAYSTATION 3. Fans can visit www.batmanarkhamasylum.com for details on how to download the Games For Windows LIVE version.

The Batman: Arkham Asylum™ demo opens as the DARK KNIGHT and COMMISSIONER GORDON return The Joker back into confinement at ARKHAM ASYLUM. But things soon fall apart as THE JOKER gains the upper hand and springs a trap, setting Arkham Asylum’s occupants upon Batman. The demo offers gamers a taste of the fierce FreeFlow™ combat system, the cunning stealth of the Invisible Predator™ mechanic, and the feeling of becoming the WORLD’S GREATEST DETECTIVE as they navigate Arkham Asylum’s imposing Intensive Treatment facility. Players can unlock character bios, as well as get a sneak peak at some of the infamous foes that BATMAN will encounter within the cavernous and macabre confines of Arkham Asylum.

Featuring amazing graphics within an intense, immersive setting, Batman: Arkham Asylum™ exposes players to a unique, dark and atmospheric adventure that takes them to the depths of Arkham Asylum – Gotham City’s psychiatric hospital for the criminally insane. Gamers will move in the shadows, instigate fear amongst their enemies, and confront The Joker and Gotham City’s most notorious villains, including Harley Quinn, Bane, Killer Croc and Poison Ivy, and the newly revealed Scarecrow, who have taken over the asylum.

Batman: Arkham Asylum™ has been rated BBFC 15 in the United Kingdom. For more information on the title, please visit: www.batmanarkhamasylum.com.