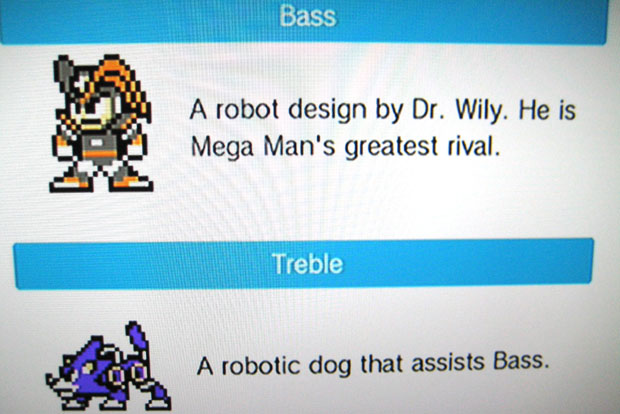 Here it is folks, the latest videogame news, straight from my television set. That is how Bass and Treble will look in Mega Man 10. They’ll be made available as playable characters via DLC on April 5th, for the cost of 200 Wii points. Also launching on April 5th is the first of three downloadable Special Stages for Mega Man 10, for a measly 100 Wii points. This stage will have it’s own unique boss, though nothing else is known about it at this time.

Even later, on April 26th, we’ll see the return of Endless Mode (one of my favorite aspects of Mega Man 9) for 300 Wii points. We’ll also get not one, but two more Special Stages, again for one buck each. Of course, this all only applies to the WiiWare version of the game, and may not apply to the PSN an XBLA ports.

So far, I’m not sure that I like Mega Man 10 as much as Mega Man 9, but there is no arguing that the DLC is better this time around. Three new stages, and a character that has never before entered the realm of the low-res sprite. That’s pretty much “the balls” for a retro-Mega Man fan like myself.

(And yes, I know Forte appeared on the Wonderswan version of Rockman and Forte. That doesn’t count.)