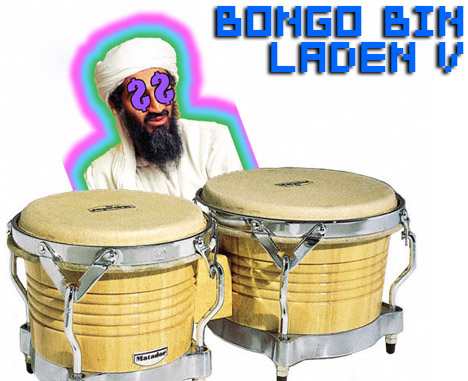 Sorry for the interruption in programming, kids. Due to forces beyond my control like physics and math and other kinds of science, BBL’s gonna be a Sunday deal from here on out. We cool? Good. I hate it when we fight, baby. I just wanna make things right.

I’ve been meaning to do a write-up on this game for awhile, but these are special circumstances. My weekly trip to the bargain bins across the great city of Bellingham brought unto me a revelation: GameStop has priced down a number of GameCube accessories, including the DK Bongos, which you can get for an easy $4.99 new in box, $3.99 used. If rhythm games aren’t your thing, there’s one application of the bongo controller that you may have overlooked: Donkey Kong Jungle Beat, one of the finest platformers available, which was also priced down alongside its standalone companions to a cool $14.99, new. They’re not likely to stay in stock for very long at such a price.

I’m breaking the rules on my ten-bucks-or-less BBL mandate and making an exception for Jungle Beat, because you can’t top a steal like that, especially for a game that was at one time somewhat cost-prohibitive due to its packed-in bongo. At fifteen bucks, though, you have no excuse. Hit the jump for more on this beatlicious title and find out why you must buy this game.

Donkey Kong Jungle Beat (GCN)
Original Release: March 14, 2005
Developed by: Nintendo EAD Tokyo
Bargain Binned: Lots of places, but can be found cheapest (that I know of) at GameStop. Game alone runs $12.99 used, bongos for $3.99 used, but you can buy a set — game and bongos — for $14.99 new. Also, if you buy online, GameStop offers a DKJB game/bongo set that also comes with a free additional set of bongos for $14.99, which makes it the best steal ever.

Rather than dig into any kind of convoluted history behind this game, the bongos, and the failing GameCube, let’s get right to the thick of things. For those of you not familiar with this game, it’s likely that you’ve got a couple of questions; namely, how in the hell do you play a DK platformer with a set of bongos? To simply read about it might not do the concept any bit of justice — really, it’s one of those “experience for yourself” sort of situations, but I swears, it works.

Jungle Beat plays like any number of other Donkey Kong platformers like the Country series on the SNES, and movement is controlled entirely by bongos. They’re not a peripheral, they’re your sole mode of input. Running right and left is made possible by jamming on the right or left bongo; to change direction, simply beat on the other bongo. Jumping is performed by slamming them both simultaneously, and DK’s clap attack — which grabs bananas within a small radius around DK, attacks enemies, activates platforms, and a slew of other uses — is just a simple clap over the microphone sensor or by slapping the sides of the bongos. Got it? Good.

Rest assured that Jungle Beat is a game that wouldn’t be nearly as impressive or engrossing without the bongo. In no way will you find it tacked on or unnecessary, and the more time you spend mastering the bongo controller, the more you’ll enjoy tearing ass through any given level. It’s a frantic style of play that actually plays well.

Game flow is basic, with levels (“Kingdoms”) broken into three basic stages: two standard levels and one boss bout topping it off. The goal is to complete the levels and finish off the boss while maintaining the highest score (called “beats”); the higher your beat count, the better your medal, the more levels and goodies you can unlock. Beats are collected via a pretty basic but mindbogglingly addictive system: collect bananas while maintaining the highest combo level to multiply your counts.

The combo system is where the depth of Jungle Beat really shows. Combos are built essentially by keeping Donkey Kong airborne, bouncing off of ledges, doing backflips, tricking off of edges and slinging off of giant mushrooms, etc. In this way you can build a combo multiplier as high as 30, ensuring that every single banana collected will be added to your beat tally thirtyfold. Lemme give you an example: say I start off a level by doing a backflip against a wall, then walljumping away from that wall. That’s a combo count of 3. Then I grab onto a flying, uh, bird-thing (4) and propel myself through the air, using DK’s clap to collect bananas along the way, before finally doing a ground-pound away from my flying friend (5) and snagging 3 more bushels of bananas along my descent. The beat total is tallied once I hit the ground, and voila, the 40 bananas found along my mighty ride through the air suddenly becomes 200.

It takes a bit of finesse and a lot of fine-tuning to get a handle on the combo system, as it depends on your mastery of Jungle Beat’s unconventional control system. But once you get the hang of things and you’re flying from one end of a level to the other without ever touching ground, you’ll be racking up beats by the thousands. You’ll need scores so high if you want to unlock all of the additional levels. I’m a huge fan of games that reward expert play, because it’s systems like these that ensure some sense of replayability. You’ll want to play levels over and over. You’ll try to get just one more combo in, push your score up by 30 or 40 beats, maybe do some speedruns — it makes for a lot of fun and it keeps you coming back. In a game as short as Jungle Beat (you’ll have it licked in 3 hours, 4 tops) that’s definitely a good thing.

The graphics are vibrant and the environments are more or less what we’ve come to expect from Nintendo — everything’s bright, colorful, and packed with movement. Little monkeylings will follow DK around and start clapping to the beat of the (excellent) music as he accumulates a truly wicked combo counter. It marks perhaps Donkey Kong’s finest return-to-form since the Country series went out the window in favor of the utterly horrible Donkey Kong 64.

Jungle Beat is about as close to a rhythm platforming game as you’re likely to ever see. It’s not quite a traditional 2D platformer nor is it quite a rhythm game; rather, it occupies a space between, one that few of us probably ever thought real. Seriously, a platformer controlled with bongos? On any other system I wouldn’t believe it myself, but this is Nintendo, folks. This is how they roll.

My goal for BBL being what it is — bringing the best and most unique gameplay experiences for the lowest cost — I can’t help but angrily recommend Jungle Beat. If you’re into unconventional and unusual gameplay, this is definitely the game for you. Avoid it no longer! Buy this game!