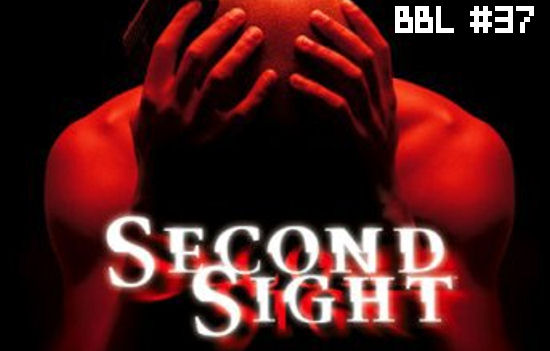 Psychic power in videogames was an idea that had not been fully explored by 2004, and still hasn’t been fully whored out, strangely enough. It was a complete and utter shame then, that by some cruel stroke of dastardly coincidence, we ended up with not one, but two games themed around telekinesis, possession and all manner of mind-over-matter shenanigans: Midway’s Psi-Ops, and Free Radical’s Second Sight.

It wasn’t just that they were both psychic-powered games. Both were third person action titles, both featured gunplay along with mental abilities, and they even both had bald-headed protagonists. It was clear that one of the games would slip into obscurity while another became better known. Sadly, the day went to Psi-Ops, while the game I still maintain is superior, Second Sight, is barely remembered.

Well no longer! Bargain Bin Laden is dedicated to finding you the best bang for a meager buck, and Second Sight is one of those titles that deserve an instant buy if discovered, dusty and discarded, in some used game store. It actually deserves more than that, but we take what we can get.

Second Sight concerns Michael Stipe lookalike John Vattic, having awoken in a sinister clinical institute with no memory and nothing but brutal injuries for company. Determined to escape, Vattic slowly realizes that he is able to deal with the guards blocking his way with a variety of psychic powers. At first he has the ability to move objects with his mind, but as the quest to reveal his past continues, he unlocks the power to possess others, generate a blast of psychic force and even render himself invisible in the eyes of foes.

The most interesting thing about Second Sight‘s plot is how it takes place over two different time periods. Much of the game is centered around Vattic’s exploits in the present — bald, injured, but imbued with psychic power. The game also takes place in the past, however, where we see him as the nerdy Dr. Vattic, sent to accompany military unit WinterICE in Siberia as it tracks down renegade scientist Dr. Grienko. The game is very well written, and the way the past and present converge to slowly piece together the disastrous WinterICE mission is handled impressively, with plenty of twists, intrigue and over-the-top characters to stop things being too serious.

The gameplay is just as split as the story, with modern day Vattic taking a stealthy approach to his journey, while the Dr. Vattic of the past handles matters in a more traditional third person shooting vein. Both styles of play are pretty well crafted and don’t jar the player by changing gears, providing a smooth experience between them. Of course, while the gunplay is good, we’re here for the psychic powers.

Far from Siberia, the present day John Vattic is more than just a doctor with a sniper rifle. As already explained, your arsenal of psychic abilities expands throughout the game, but your bread and butter will remain telekinesis. The ability to move objects with your mind is a constant ally in Vattic’s adventure, and the expert use of ragdoll physics makes it all the fun. On the PS2 at least, moving objects around is pretty fiddly and takes some getting used to. Pressing and holding L2 allows you to target the nearest object or person, and pressing R2 then allows you to move your targetted object around with the right analog stick. A similar method is employed with shooting, and it has to be said that the controls are somewhat complexed, especially for an action game. It takes practice for sure, but luckily you do get with the program after continued play.

Before the game’s conclusion, Vattic is a psychic powerhouse and when things are in full swing, you’ll be able to hoist guards into the air and fling them like a capricious deity, saunter past them after convincing them they can’t see you, or take control of the bodies of enemies to do the dirty work in your stead. Add in psychic blasts and and the power to heal yourself (if you can find a quiet moment) and there is a wide inventory of mental chicanery at your disposal. Your power is tempered by the Psi-gauge, which refills over time and will halt your psychic dominance if you allow it to run out completely.

With all these abilities, you’re given everything you need to sneak through buildings, sewers and slums, making sure to avoid detection whenever possible. Progression is fairly linear, but with so many toys to choose from, you’ll be presented with a variety of ways to approach a given problem. You can take control of a box and knock a guard down with it, make a cupboard door open and flap shut to make someone think they’re going crazy, invisibly slip past or just drag an enemy into a quiet corner so you can kick his head in at your leisure.

While there’s a lot of fun to be had, the trial-and-error nature of gameplay can be incredibly frustrating. Getting caught usually throws an onslaught of new guards your way, and there’s no killing them all and moving on. The only option is to hide and wait for the chase to be called off, after which time all previously eliminated guards will return, requiring dispatching yet again. The game seems to rely too much on repeating sections over, the most irritating times being where you’re detected by security cameras that you had no way of seeing.

The impact of the psychic abilities also doesn’t feel like it’s everything it could be. For instance, when Vattic first discovers his telekinesis, we’re shown him lifting a guard and slamming him violently against a wall over and over. In the game, however, you never get to do that, as enemies just roll around in Ragdoll Hell, issuing minor blood specks when you rub — not slam — them against walls. Of course, throwing them about is always going to be awesome, but outside of those moments where you’re tossing the poor fools through windows and the like, you’re left wishing some more beef had been given to your powers.

Adding in the usual problems associated with stealth (guards seeing you without you even knowing what you did wrong, and rendering you helpless upon discovery), Second Sight definitely irritates at times. It’s fortunate then, that the game does a huge deal to wipe those annoyances away with awesomely tense sections, balls-to-the-wall action sequences and fantastic little touches — one memorable moment is the discovery of a computer in the same room where you just killed a guard. Looking at the PC reveals he was chatting to his girlfriend on an instant messenger when you burst in and shot him, and now his girlfriend is asking where he’s gone.

With a visual aesthetic that strongly resembles Free Radical’s other property, Timesplitters, the game has a great hyper-real look to it that keeps the game looking bright and fresh despite the sometimes dark story. The ragdoll effects are nearly flawless, while the voice acting is top quality and helps the story along tremendously.

Second Sight is a fine game, and in my opinion utterly trounces the disappointing Psi-Ops. it’s a shame that this game has been practically drenched in the murky waters of obscurity, as its gameplay, gimmick and plot was mostly successful and it remains a highly entertaining sci-fi adventure. The game is almost insultingly cheap nowadays so there really isn’t an excuse not to play it. If you see this game, snap it up. It’s worth the money, I promise you.