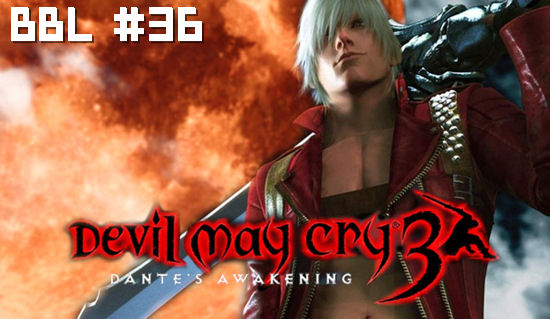 With Devil May Cry 4 hitting American shelves this past Tuesday, and leaping proudly into the hands of Europeans tomorrow, I thought it was high time we featured some of Dante’s exploits in Bargain Bin Laden. I know, I know, you’re all too busy playing DMC4 to care about the past, but when you’ve slayed  your last demon on the PS3/360 and need somewhere to turn, you’ll all come crawling back.

The first Devil May Cry was a revolution in the action genre, a game that played as good as it looked, made even novice button mashers appear as on-screen Gods, and provided a hefty level of challenge. Most people thought the sequel paled in comparison and dented the credibility of the series, but DMC answered the critics with this exaggerated, testosterone-fueled prequel. Dante’s Awakening put the devil slaughtering series back in gamers’ good graces, and now that it’s ripe for the penny penching player to enjoy, those in need of a fix after DMC4 will find it’s worth every cent.

Hit the jump as we take a look at Devil May Cry 3: Dante’s Awakening.

Devil May Cry 3: Dante’s Awakening (PS2)
Developed by: Capcom
Released: March 1, 2005
Bargain Binned: $12.99 at GameStop (or $14.99 for special edition), 150 Goozex points (250 for special edition)
Some things in life can be so cool that they become tragically, hilariously, uncool. They get so absorbed in their sense of style that all you can do is cringe when it doesn’t quite work. This is Dante, all over, the kind of man who says “this party’s gettin’ crazy! Let’s rock,” with a straight face before shooting snooker balls into the heads of demons and casually backflipping all over the room while eating a slice of pizza. The greatest thing about Dante is that he’s so badass he’s actually … bad. Bad in a deliriously funny way. The character is almost a self-parody, and nowhere does that shine more than in DMC3. When your main character can’t even sit in a chair or put on his jacket without turning the affair into some cheesey, overly dramatic stunt, you know you’re in for a ride.
Devil May Cry 3 is a prequel to the first game and mainly explores the rivalry of Dante and his twin brother Vergil. Like all DMC plots, it’s ridiculous, camp and barely makes a lick of sense, but that’s all part of the fun. Devil May Cry games are, in a way, bloody stupid, but if you can’t indulge yourself in some silliness now and then, you have a heart of stone. The plot is really of no great relevance, but the script is so moronic and the cutscenes so needlessly crazy that you can’t help reveling in it all. If the first Devil May Cry established Dante as a cool action hero, Dante’s Awakening cemented him as an unwitting satire of every cool action hero who has ever appeared in a game.

The really important stuff lies in the action, and let me tell you that the action in Dante’s Awakening never lets up for a moment. There’s more violent fun in DMC3 than ever before, with a satisfyingly abundant arsenal of stylish moves that remain incredibly simple and intuitive to pull off. Things should feel familiar to anybody who’s played the first two entries in the series — you can slash away with your sword, pull out twin pistols Ebony and Ivory to pump your foes full of lead, or combine your weapons for added awesomeness. Even in this day and age, uppercutting a victim with your sword and suspending him in mid-air with bullets alone is still a total joy.

You can collect all manner of different weapons as you progress through the game, from a pair of ice nunchucks to a grenade launcher and, just to make things even more silly, a demonic electric guitar that fires bats at your enemies. I don’t quite get it either, but it looks cool, and looking cool is the only thing that matters.

This game introduces the style system, which gives players a shallow ability to tailor Dante to their own preferred style of fighting. The game starts out with four styles to choose from, Swordmaster, Gunslinger, Trickster and Royal Guard. The first two speak for themselves, as the former enhances your melee prowess and the latter is suited for those who like to keep their distance with a hail of bullets. Personally, I found the other two styles a bit unfulfilling. Trickster is all about evasive moves and acrobatics, while Royal Guard gives Dante mastery over defense and counterattacks. That said, no one style will have that deep an impact on the way you fight. You’ll still be using both sword and guns throughout, and the style system does little more than just add exclusive, neat little abilities to your repertoire of moves. It’s not a bad addition by any means, but it’s far from revolutionary.

Now, the gameplay in DMC3 is certainly fantastic, and the combat can be incredibly satisfying. There’s only one problem — it’s also so hard it’s a f*cking nightmare. I am far from a top tier gamer, and would never claim to be the best player alive at anything, but I am not crap either. I consider myself pretty average in terms of skill, and that’s why I could never comfortably accept Devil May Cry 3 humiliating me as much as it did. Don’t get me wrong, challenging games can be awesome — Metal Arms, for instance, handed me my arse once every three minutes, but there was still something hugely fun about it. DMC3, at times, is so hard and frustrating that it kills the fun. It is what I like to call, “hard for the sake of hard.” It’s very clear that Capcom set out to prove a point, to show off just how unrelentingly brutal it can make a game, and it’s a mentality I often find quite vulgar in a developer. In between enemies that never give you an opening and boss fights that tear your head clean off without mercy, when you add in the fact that death means restarting an entire level all over again, your will to play gets sapped from your very veins all too often. Sorry to say, but there’s a challenge, and there’s being a dick.

If you can swallow the difficulty (or your pride enough to play on easy), then there’s still no denying that DMC3 is a finely crafted experience. The pace remains fairly consistent throughout, and the game also features some of the biggest, scariest, most grueling boss fights around. Players of the game will surely remember their first encounter with Cerberus, a gigantic, ice-encrusted dog who isn’t shy about throwing his considerable weight around. At the time of release, boss fights often felt like a dying art, and it was refreshing to see Devil May Cry 3 keep the tradition alive, even if such tradition did tear you to pieces all to regularly … on easy mode.

As for the presentation, this prequel brought back the gothic atmosphere and arcane architecture which gave the original so much personality, while the mixture of sinister instrumentals and cheesy rock music bolsters the title’s character. Add in the beautiful character designs and imaginatively depicted monsters you’ll meet throughout the course of your adventure, and you have a total package that’s pleasing to the eyes and ears.

Devil May Cry 3: Dante’s Awakening is among the greatest action titles that the PS2 library has to offer and certainly shouldn’t be passed up if you spot it with a low price tag. It’s not just good as a bargain, it’s a good game, period, and if you never tried it, give it a look sometime. You might end up frustrated as hell, but you won’t walk away disappointed.