As the U.S. release of No More Heroes draws nigh, it’s only appropriate that this week’s Bargain Bin Laden take a look at Killer 7, which, for many gamers, served as an introduction to writer-director Suda51.

Killer 7 received mixed reviews and enjoyed less-than-stellar sales, quickly becoming the gaming equivalent of Rocky Horror Picture Show: weird, far from perfect, and unlike anything else I’ve ever experienced. If any of you listened to Podtoid 36, you heard me cream my pants over Killer7. After having a few days to evaluate it and change my pants, my stance hasn’t changed that much, but it is infused with the realization that Killer 7 is deeply flawed; which isn’t to say that each and every one of you shouldn’t drop 10 bucks on it as soon as possible.

Hit the jump to see my take on how Killer7, despite its narrative and technical flaws, still manages to be one of the most original, compelling, thought-provoking, and enjoyable games I’ve experienced.

Killer7 takes place at the turn of the 21st century, during which international peace has been established. As terrorists are wont to do, they have again sprung up — The Heaven Smile are a group of mindless, mutants that go about their business in much the same way that real-life terrorists do: they blow themselves up. This is usually done in close proximity to a member of the Killer 7, a group of assassins that work together to stop the Heaven Smile.

At the same time, relations between Japan and the United States are rapidly breaking down, and the two countries are on the verge of war. Helmed by Harman Smith, the the Killer 7 enter the fray on behalf of mysterious power-brokers. Figuring out who Harman is, where his loyalties lie, and how his various personas work presents the third facet to the unholy triune narrative of Killer 7. Good luck sorting it all out.

To say that the story of Killer7 is disjointed and difficult to follow would be a bit of an understatement. Most of the dialogue is cryptic and vague, and while all of the characters are identified, their true intentions and loyalties are almost unanimously unclear. It’s not that I have a problem with disjointed, open-ended story-telling or leaving a few questions unanswered, but it’s that Killer 7 simply presents too much information, without enough to fill in the gaps. The dialogue is too obtuse, and the references are too vague. The end result is that, while Killer 7 presents a brilliant backdrop, the potential for fulfilling, satisfying closure never pulls through.

While terrorism and power politics might seem a little mundane and domestic as far as videogames go, Suda 51 presents such a gothic, distorted, and surrealist vision of events that the political subterfuge gets buried. Killer 7 is really quite macabre and gruesome – suicide, murder, terror, and warfare are integral parts to this world. In this context, the disjointed narrative simply works — the mystery is the driving narrative element of the game which, combined with the grotesque style, creates a frenzied need to know what the hell’s going to happen next. 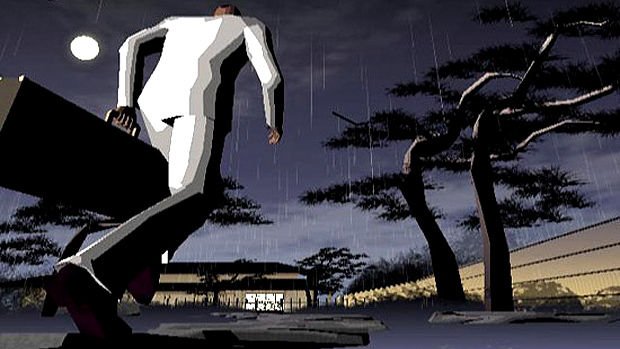 It’s impossible to talk about Killer 7 without mentioning the controls. Like everything else in this game, they’re weird. Use X to move forward and Δ to turn around, most of which happens in a third-person, over the shoulder view. R1 draws your weapon and switches into a first-person view, in which the L1 button scans for enemies, Δ locks on, and X fires bullets of retribution into their gross, mutant skulls. You may notice that the left analog stick, which traditionally controls motion, gets nary a mention — that’s because it doesn’t do anything.

Killer 7 is played entirely on rails. For those of you who weren’t around for the golden age of arcade, light-gun shooters (House of the Dead, TimeCrisis, etc …), that means player movement is along a pre-determined and set path, like a minecart on a track. So, you tell your character when to move, but the game decides where and how fast. Eventually, the player will come to a “junction,” which is any time the player needs to choose a new direction, like going down a certain hallway or into a specific room. Here, the player simply chooses the new direction, and the on-rails movement continues. The controls seem awkward at first, and there’s a definite learning curve, but after half an hour or so you’ll feel right at home with the movement.

While you get to off a few humans every now and then, the majority of the player’s time will be spent “exterminating” the ubiquitous Heaven Smile. Enemies are invisible until you scan for them, but their creepy laugh alerts the player of their presence. Once you can see them, you’ll notice that each Smile has a blinking, yellow critical point which, if hit, will give the player massive amounts of “blood.” Thick and thin blood can be used to level up the Killer7’s stats (power, speed, waver, and critical hits) and to heal members who have taken damage, respectively. You could always kill them the old-fashioned way — a chest full of bullets — but you won’t get any blood. Furthermore, different members of the eponymous group are better suited to handle different types of Smiles.

The on-rails movement, the scanning mechanic, and the necessity of gathering blood eliminate any semblance of running-and-gunning, instead favoring patience, precision, and strategy. In long hallways and corridors, the process is pretty straightforward, but as you progress in the game, the environments begin to shift to more open spaces and the ability for Heaven Smile to come from any direction at all is nerve-wracking. I went through many a panic and yelled like a small child many a time as Heaven Smile deftly (and invisibly) snuck up behind me. Near the end of the game, the level design becomes a bit uninspired (several levels involve clearing out each floor of a building on your way to the top), but the combat fits into the game’s aesthetic and never fails to unnerve and frighten.

Unfortunately, this is where the technical falterings of the PlayStation 2 version tend to show. Due to the short draw distance in some areas, enemies tend to “pop” into existence right in front of you, making it impossible to quickly change characters or aim properly. Also, the blinking critical points have a tendency to never show up, which is particularly frustrating when some Smiles can only be killed by hitting their critical points.

Lastly, I experienced several drops in frame rate, particularly when encountering enemies near junctions. While none of these technical flaws are game-ruining, they are a hindrance. When a game’s combat system focuses on precision and quick decision making, the short draw distance and frame rate slowdown are noticeable.

Nevertheless, the combat is well-executed and fun, and enough new types of enemies are thrown at you that it never gets dull. The rails mechanic is used effectively and Killer7 heightens the tension — forcing the player to diffuse it — over and over again. 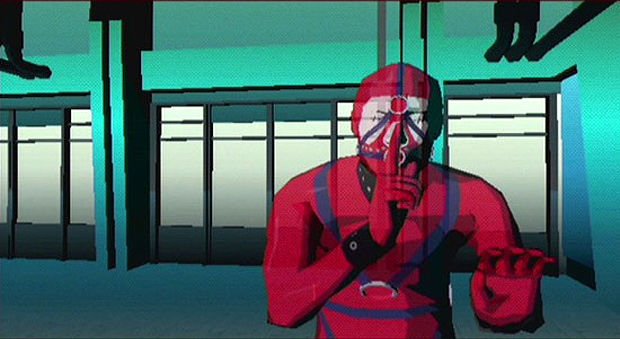 While the combat basically boils down to a beefed up light-gun game, the rest of Killer7 is firmly in the adventure genre. Besides killer Heaven Smiles, the meat of the game lies in collecting objects and information and using them to solve puzzles. Solving puzzles ultimately yields Soul Shells, which are tokens needed at the end of the level in order to confront the boss. Like much of the game, the puzzles and the Soul Shells are just small parts of one, big, 10-hour non-sequitur. I still can’t tell you what Soul Shells are exactly, but you’re going to need them.

To solve the puzzles scattered throughout each level, the player will use: an assortment of rings, miscellaneous objects, and each of the Killer 7’s specialized powers — such as invisibility or picking locks. When a special object or power is needed to progress, a twangy, discordant guitar riff is heard.

Unfortunately, very few of the puzzles are particularly difficult, and most simply require a little legwork and back-tracking. To boot, there is an assortment of sundry characters that give you hints along the way. There is even an informant you can pay that will spell it out further. A thorough player can easily clear a level in one swoop. 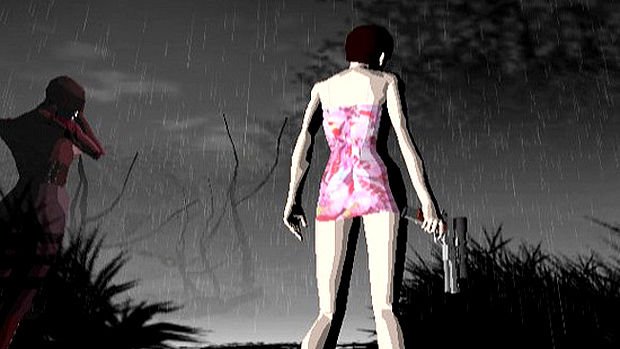 The cel-shaded graphics, distinctive use of color and contrast, and comic-book character models all complement the narrative wonderfully, and provide an art style that is simultaneously unique and unnerving. It’s worth noting, however, that these screenshots don’t do the game justice: it looks much better in motion.

The background music and the ambient sounds, not to mention to superb voice acting and localized dialogue, also contribute the distorted world of Killer 7. The game is as aural as it is visual: the laughter of the Heaven Smile and the twangy guitar cues are vital to both the gameplay  and aesthetic experience.

That aesthetic is uniquely macabre and unnerving. For example, I will never forget the first time I found Susie Sumner’s severed head in a dryer, calmly telling me about her life, times, and gruesome death. Killer 7 is a lot of things, good and bad, but it has an undeniable sense of creepy discord. I really can’t stress enough how off-the-wall the game’s story is and how well the off-kilter graphics, gameplay, and voice acting contribute to it.

I hope that I’ve been able to convey where Killer 7 succeeds and where it falls short and why it’s worth your time and money. If you can get past the awkward controls and flawed storytelling, you’ll find a game whose combat mechanics are unique and effective and whose puzzles, while not exactly difficult, are nevertheless interesting. And even the narrative proves to be, at the very least, thought-provoking and new. Ultimately, Killer7 is enjoyed best as a comprehensive aesthetic experience.

In French, there is a saying that roughly translates into “you have to want to like it,” and I think it’s particularly applicable here. Killer7 is far from perfect, but it’s greater than the sum of its parts. Give it a chance, accept that it’s weird as hell, and you’ll find a thoroughly enjoyable and mind-bending experience.

[Special thanks to Topher and Andrea for their help]