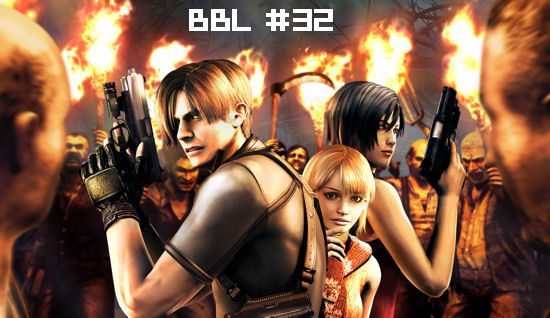 Welcome to another edition of Bargain Bin Laden, where we bring you the best of the cheap in the world of games. While some of my previous choices have been quite obscure, today’s edition is a game you should all be more than aware of. It was, after all, one of 2004’s best games and one of the greatest action titles of all time. I am of course talking about Resident Evil 4.

While it was rereleased with a Wii Edition earlier this year, you can pick the original GameCube or PS2 version up for under twenty bucks and be guaranteed an awesome time. If you want to read exactly why this game is so great, and I know you do, then by all means hit that jump, sucker.

The game takes place on a remote European island that’s not named because it’d probably upset whatever poor country got singled out for the mass extermination that this title brings. You take on the role of Leon. S. Kennedy, the rookie cop from Resident Evil 2 who’s now become a government agent (a very short corporate ladder, the US government), on the trail of the president’s daughter who was kidnapped for reasons as yet unknown. Naturally, the proverbial hits the fan when Leon stumbles on a remote village, to find its inhabitants are all homocidal maniacs hell bent on tearing our floppy haired hero to shreds with pitchforks, sickles and chainsaws. So, a typical Friday night in London then.

The first thing you’ll notice about this game is the unique perspective you’re given. The camera remains over the shoulder of Leon the whole time, zooming in closer when he aims his weapon. It’s radically different from the fixed camera angles of earlier entries in the series, and takes some getting used to, but really helps draw you into the game. Furthermore, despite this new perspective obscuring your vision somewhat, making it harder to see enemies from certain angles, I feel that’s a deliberate attempt by the developers to make the action seem more tense. I must confess, it can translate into something of an annoyance at many times, but it has its effective “where the hell did HE come from!?” moments.

Most of the game will be spent shooting at screaming villagers, who aren’t zombies, and the developers really want you to know that. These guys are Ganado, as evidenced by their fast movement and preference toward hacking you up rather than eating your soft pretty flesh. Capcom seems to have borrowed a little bit from its other uber violent title, Killer 7, at least in spirit (there’s even an enemy seemingly based on the Heaven Smile monsters from that game, as well as a gun called Killer 7). When you aim your weapon to shoot, Leon stands still, allowing you to manually move your currently armed weapon, while a red laser sight indicates the exact path of the bullet. A small red dot appears at the end of the laser when something is able to be shot, allowing for pinpoint accuracy with due care. The over the shoulder angle makes it a little hard to get the aim on target sometimes, but for the most part, it’s a wonderful system that eliminates the need for an auto-aim.

The shooting in RE4 is also some of the most addictive and fun that you’ll find in any game. Although a huge deal of time is spent fighting the same types of enemies, it never seems to get boring, due to the fact that combat with even the most simplistic of grunts is varied and deep enough to entertain you consistently throughout. Firstly, the Ganado feel the impact of your bullets wherever you shoot them. For example, shoot one in the leg and it’ll clutch its knee, do the same thing while its running and the poor lummox will tumble to the ground like a careless child. They’ll drop weapons when shot in the hand, and their heads often tend to explode in satisfying bloody chunks when you get them between the eyes. Deft shootists can even knock projectiles out of the air before they hit, too. That’s not to mention the various objects in the environment that can be shot at to hinder the enemy, such as the classic exploding barrels and the fun paraffin lamps that bathe your mumbling opponents in flames. Flames of death.

A lot of fun can be had with the AI of the Ganado, as well. While not masterminds, they react well to their surroundings and your actions, ducking from your path of fire, charging you when you least expect it, and clambering through windows and knocking down doors in order to reach you. You’ll often find yourself beset on all sides, looking for a good wall to back yourself up against or some cover to protect you. You can climb to vantage points and knock down the ladder, though the Ganado are more than happy to put it back up and start climbing, which often leads to a satisying instance of you knocking it right back down with the evildoing simpletons already halfway ascended.

There’s plenty of variety to be found within the basic shooting gameplay, too. It’s like Capcom did their best to pack this title with absolutely everything possible to do in an action game. During the course of your adventure, you’ll fend off Ganado while careering along in a mine cart, you’ll fight giant fish in a speedboat, you’ll be chased by a giant marching statue of a dwarf and the best thing is, you’ll never do anything more than once. Often in action games, as soon as you play through one particular sequence, you’ll find yourself having to trudge through countless retreads of the same old routine until the end credits. Not so in RE4, there’s always something different and unique to do, and not once do things repeat themselves. It leaves one question – why can RE4 manage to do this and hardly anything else?

The only major gripe I have with the main gameplay is the handling of your onscreen character when moving. Despite eschewing the awful control scheme that has plagued the RE series and survival horror games as whole, Leon still handles like a forklift truck more than a person, with a huge swinging arc whenever you try and turn a corner. This can be a real inconvenience, especially with such a tight camera angle, and really takes some getting used to. Thankfully you can do 180 degree pivots, which can be lifesavers.
Throughout a lot of your game, you’ll be expected to escort the president’s daughter, Ashley. Now, before you roll your eyes and bemoan that most detestable of all game novelties, the escort mission, let me assure you that RE4 actually gets it right. Ashley doesn’t get in your way, doesn’t need you to babysit her constantly, and only once in the entire course of the game did I accidentally shoot her. The programmers did an excellent job here, making sure that all the greatness inherent in their masterpiece  wasn’t ruined by some terrible dunce who gets herself killed and wrecks the flow of play. So long as you’re not completely reckless and ignorant of the situation, Ashley should prove to be no real issue during the game, save for making sure she’s tagging along behind.

One of the staples of the Resident Evil series is its puzzles and thankfully, that hasn’t carried over into RE4. Though puzzles remain, an emotionally damaged ape could solve them and they won’t prove to be any problem for most people. The only considerable time I spent on a puzzle was spent only because I thought it was more complex than it actually was and ended up making things more difficult for myself. That, and I’m not as smart an emotionally damaged ape. Whereas in older Resi games, the puzzles often were needed to bolster the gameplay, it would simply be superfluous in this installment, and only serve to break up the action unduly.

Another staple of the franchise has been its boss fights, and it’s safe to say that there are some truly memorable encounters throughout this one. Of special note is the duel with a particular fellow called Krauser. I point it out because he’s the most humanoid boss, and an unwritten rule in gaming is that the more human the boss, the more  annoying it is. Not so in RE4. I point it out only because I hate humanoid bosses through how frustrating they often are, and was pleasantly surprised this time around. Most of the big fights are positively huge, with massive intimidating enemies that often require a little basic strategy to dispatch, and the memory of your combat will stick with you for a while.

Now, onto the one thing I really disliked with this game, and that’s the button pressing sequences. I’m loathe to even call them that, since they’re ambushes more than sequences. During cutscenes, sometimes a pair of symbols, correlating to buttons on the gamepad, flash onscreen and you have to press the buttons quickly otherwise you’ll be instantly killed and it’s game over. Now, I loved the timed button sequences in Fahrenheit, but you knew they were coming, given full warning, and they actually had something to add to the game. Sadly, the RE4 ones are unwarranted and nearly always catch you out the first time around, not least because the buttons you have to press are random between two possible combinations and change at any given moment. There are times when you need to press these buttons during actual fights, and that’s not so bad, since they actually have meaning and add a little excitement. The ones during cutscenes, however, are merely aggravating and seem thrown in for that sole reason. I don’t like being ambushed by my games.

The game looks pretty damn good even today and the PS2 visuals do a great job keeping up with the GameCube. The voice acting was typical of Capcom — somewhat decent but marred by occasionally weird and unnatural dialogue (“Try using a knife next time. Works better for close encounters.”). The game remains one of the best looking of the last generation, helped along by some terrific animation. All in all, it was a very impressive technical showcase for a generation that was heading into its twilight era.
Resident Evil 4 is pretty cheap and deserves to be played by every true gamer. At half price, even the budget Wii Edition is worthy of note here. If you’ve played it, you really should agree, and if you haven’t, why are you sitting here reading this when you could be raiding your local store for a copy right now? GO GO GO!