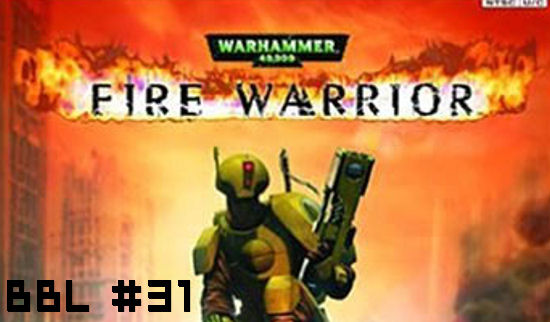 The wares of Games Workshop have been a bone of contention throughout much of my life. Drawn in by the wonderful backdrops, the fantastic designs and the lure of an engrossing tabletop game, my only problem so far has been the fact that I’m neither rich nor insane enough to spend the hundreds upon hundreds of dubloons needed in order to field an army of miniature metal warriors.

Save for a few Tyranids and a couple Thousand Sons here and there, I never really got into the Warhammer 40,000 universe as much as I’d have liked. I did, however, snap up Warhammer 40,000: Fire Warrior as soon as it hit stores. A first person shooter enriched with the dark and brooding Warhammer 40K story was something I couldn’t keep away from.

While almost completely forgotten, Fire Warrior was a great little FPS that that provided nothing new, but was a most solid and challenging title that, if found, can now be purchased for a mere pittance. It is for this reason that Warhammer 40,000: Fire Warrior finds a place as the next treasure uncovered by Bargain Bin Laden. Hit the jump for more.

The storyline for Fire Warrior is part of a setting that has had over twenty years of work put into it, and the universe has evolved and expanded into a most fascinating one indeed, just perfect for videogames to exploit. WH40K mainly revolves around the Imperium of Man, the human race having conquered much of the galaxy and become almost Roman in their ways of speaking and warmongering. Now fanatical and quite insane, humans are devoted to their half dead Emperor and xenophobically destroy anything they view as heresy, alien or tainted by their greatest foes, the forces of Chaos. The Imperium is also under constant threat of alien attack, be it from the elf-like Eldar, the all-consuming Tyranids or the metallic, soulless Necrons.

In Fire Warrior, however, you don’t play as an Imperial soldier or the heavily marketed, iconic Space Marines that 40K is best known for. At the time the game was made, Games Workshop had introduced a new race of highly advanced, “gray alien” armies that fought with armor and war machines that resembled anime mechs. These were the Tau, and this is the race you find yourself in the boots of for the game.

You play as Kais, a new recruit from the Fire Caste of Tau people. The Fire Caste are the warrior sect of the Tau people, and your role is to protect the species from outside threats. Your first mission is the rescue and escort of Ko’Vash, a Tau Ethereal (a very important chap, basically) that has been captured by the human Imperium. It’s all standard stuff and doesn’t require a doctorate in Games Workshop lore to understand (aliens and guns) but it expands over the course of the game, and becomes much darker and deeper as you progress. It’s also loaded with referential treats for followers of the tabletop game. It’s all very faithful to the 41st Millenium and should satisfy fans of the subject matter.

The game is helped along by an all-star cast — if you’re British and know who they are. Brian Blessed, Burt Kwuok, Tom Baker and Sean Pertwee all have roles and lend the game some extra credibility thanks to their terrific vocal talents. Pertwee still has one of the most awesomely villainous voices in videogames. But that’s enough about the fluff — how is the gameplay?

Controlling the Kais is simple enough and adheres to the standard set by all console FPS’. It’s the usual mix of running, gunning, crouching, strafing and lobbing the occasional grenade. Fire Warrior was released around the time that limiting your weapons to two became the big craze, and it follows this trend to the letter. While there are all manner of guns recreated from the source material, you can only take two at a time and one of them always has to be a Tau weapon. The main problem here is that Tau weaponry loves to run out of ammunition, and resupplies for it appear once in a blue moon.

The game provides a decent level of challenge, and if you don’t play carefully enough you will instantly find yourself slaughtered. The Tau are physically weak, and can find themselves overwhelmed if they go too far out. This has been captured quite well in the game, to the point where encountering your first genetically enhanced, gigantic Space Marine makes you brick it right there and then in your pants. While not the hardest game in existence, there are some thoroughly difficult moments and you should find your wits tested quite a few times.

The game ought to last you a decent amount of time as well. The challenging portions and the twenty one levels ought to provide a meaty gaming experience. Just don’t expect innovation. As already explained, this is an FPS and doesn’t try to break the mold. It relies on its setting to stand apart, and if you’re sick of shooters, you’ll probably want to steer clear of this one. If you have even a passing interest in Games Workshop products, however, this is worth a peek.

Graphically, Fire Warrior looked pretty good for the day, and captured the feel of the 41st Millenium very well. While suffering too much from the “Sons of Liberty effect” (in that things sometimes looked a bit too pretty and glass-like istead of gritty and wartorn), some of the visuals in the game are truly breathtaking, from the swirling clouds in the sky of a Chaos-infested planet to a spaceship dogfight that rages while you scurry about on the hull of one of the participating vessels.

The characters all look like their miniature model counterparts and are animated how you’d expect them to. They carry themselves with a sense of style and personality that truly fits in with the 40K mythos and shouldn’t disappoint fans. The game also sounds fantastic, from the aforementioned voice acting to the satisfying explosions and weapon sound effects.

Fire Warrior is not a revolution, nor is it the best example of an FPS. It is, however, a very solid shooting game with a fantastic backdrop and a pretty decent story that should satisfy fans of the tabletop game and newcomers alike. While nobody will come away from the game with a sense of awe and a feeling that they’re just played a masterpiece, it’s cheap and it’s fun, which is what this series of articles is all about. Check it out if you ever see it discarded on a Gamestop shelf.