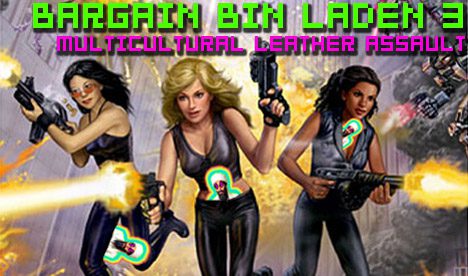 Settle down, children, and let ol’ BBL tell you a tale; a tale of mystery, intrigue, and ultimate suffering. It is a story of Japanese shooters and their horrible and inappropriately localized US counterparts, of witchcraft, and sailboats. It’s the story of Mobile Light Force 2. I was lying about the sailboats. The witchcraft, on the other hand — you’ll have to read to find out.

Seriously, you would’ve figured that we’ve come far enough along that publishers wouldn’t screw with original content in such a way, but XS Games done and gone proved me wrong. Back in 2003 they took it upon themselves to publish a slew of shooters in the US — a noble endeavor indeed, but their execution was a little nutty. Seeking to establish some kind of brand recognition, they took two games — Gunbird and Shikigami no Shiro on the PS1 and PS2, respectively — and renamed them Mobile Light Force 1 and 2, despite having no original connection to one another and having been created by two completely seperate developers.

Capitalizing on what I can only assume was hailed in their offices as a fit of unmitigated brilliance, XS Games also gave them some quality box art, seen above — three Charlie’s Angels lookin’ ladies toting guns, blasting away robots, looking all sexy and whatnot. Again — no connection whatsoever to the original game. Sorry, games. Oh, did I mention? They used the same box art on both games. Two unrelated games by unrelated developers, lumped together as a series, and slapped with the (unrelated) box art. Though XS Games have since gotten wise with their delivery of the sequel, Mobile Light Force 2 stands as a testament to what happens when a great game runs through really, really stupid hands.

Sound wacky? You bet! And It only gets worse — or better, if you’re a shmup whore like good ol’ Linde. Hit the jump for more!

Let’s say you’re a publisher. You’ve just slapped down a chunk of change on distribution rights of a Japanese shmup — a genre that is notorious for bringing in virtually no money in the US gaming market — and you want to see if you can make it sell. You’re a no-name brand, for the most part, and you’re gunning for the impulse purchase market, mostly grandmothers looking for gifts and kids high on fresh allowance and slurpees browsing the shelves.

The rights you’ve purchased are for a game called Shikigami no Shiro, a shmup with a heavy anime influence. You’ve heard about this “anime” shit once or twice before — something about that Cartoon Network and those hyper little critters what burst out of balls and fight, that kind of thing. Big eyes, bigger breasts, the works. It seems to be getting kinda big, but– hell, a fad’s a fad, right? Let’s get rid of that. Plot? Screw plot, it’s about flying people who shoot flying ballet dancers. Ain’t gonna win any Oscars, right? In fact, let’s wipe the slate clean, wring out every last drop of creative content that Shikigami no Shiro might have, and throw in some ladies. No no — some dangerous lookin’ chicks. Guns and leather. Explosions. Robots. Friends, we’ve got a hit on our hands.

It’s hard not to look at a game like Mobile Light Force 2 and stifle the inevitable and overpowering laughter. This is a brand of stupidity that was once fiercely reserved for the early 90s, long before quality localization was more or less required for a marginally positive critical reception. Not only did XS Games wipe the name from Shikigami no Shiro, but the animation cuts throughout the game, the voice acting, and any semblance of story. Why? Well, it’s complicated.

See, we’re a bunch of namby pansies, and by we, I mean you. Despite games that deal with a variety of hard-hitting and at times even gruesome material, not to mention the entirety of the Silent Hill series, XS Games still thought the story behind Shikigami no Shiro was a little hard for US audiences to swallow. Truth is, they might have been right. Here’s a synopsis of the plot, culled from Jnk2k2’s review at Netjak:

The plot centers around a sadistic killer not unlike Japan’s own Tsutomu Miyazaki that carves his victims neatly with a knife over a 20 hour period, while they’re alive. Kind of grim – make that very grim, and definitely unsuitable for an audience that is quick to strike on any game that tackles mature themes.

It makes sense, if you think about it. Rockstar has the cash to back games like Grand Theft Auto and Bully. XS, on the other hand — hell, have you even heard of XS Games? There you go.

It’s nothing to cry over, really. If you ever found yourself lamenting a lack of riveting storytelling in, say, Gradius V, the dearth of such content in Mobile Light Force 2 might rub at you the wrong way. Shmup fans, though, will be pleased to know that the one thing that XS didn’t touch was the gameplay, and we should be thankful such is the case.

Mobile Light Force 2 isn’t the most innovative shooter to come down the pike, but since that pike is astonishingly bare these days, it’s worth picking up just by virtue of the genre it represents — and, moreover, it happens to be a damned good game. MLF2‘s vertical arcade-style playing field bursts at the seams with its deluge of enemies and bright, shiny deathbullets. The graphics aren’t half bad, merging 2D player sprites with 3D backdrops and enemies. And the enemies — man, that’s almost something made even better by the lack of any sort of explanation or expository plot. Why are you flying over a metropolis, taking down scores of flying ballerinas, coffins, evil teddy bears, flying baby-head butterflies and many others that come after you wave after wave? The localization (or lack thereof) of Mobile Light Force 2 doesn’t say a word about it, making your crusade through the skies that much funnier.

The gameplay is basic with a handful of innovations to keep things interesting. The game begins after character selection, during which the player can choose from a variety of characters with different bullet patterns and special attacks — who, as you may have already guessed, are inexplicably placed in the game’s schema. Those three chicks on the cover? Nowhere to be found. But you can play as De Jon Kim — a flying bloke who, clad in a khaki trenchcoat and toting a guitar case, can fire fast streams of green fury and use a close-range spiritual saber as his secondary attack. Why? Why the hell not?

That’s another thing. All of the game’s six characters have secondary attacks which typically fall into two categories: close range and lock-on. These are utilized by holding down the fire button in lieu of a rapid-fire tap, offering interesting ways to dispatch the legions of foes that are bearing down upon you. Compound this with the standard-issue big blow-up crash bomb that you can occasionally pick up and you’ve got a lot of ways to play the five-level campaign of Mobile Light Force 2.

The game shakes up the standard conventions of the shmup genre in a couple of ways beyond just multiple characters. Score bonuses are attributed to kills based upon your proximity to the enemies that you’ve just blown up — in plain English, the closer you are to the baddo, the more points you get. Additionally, veering dangerously close to enemy bullets will instantly upgrade your attack to its fullest power, meaning that close shaves within hails of enemy gunfire can be dealt back upon them almost instantly. It’s a gameplay scheme that rewards expert play and style, and it pushes the challenge to the limit by providing reason to act like a jackass and zig-zag through as many insane bullet patterns as possible. Whole lot of fun.

What polish the game may have had hasn’t carried over through the localization. As I mentioned previously, the animated sequences peppered throughout the original Shikigami no Shiro are gone, and so are the original voices for the playable characters. In their stead are what I can only presume to be people pulled from the street outside of the publisher’s office on the day that they, you know, decided to handle that gay Japanese gibberish throughout the game — it didn’t fare so well. For example, while playing as Kuga Kohtaro, a direct hit will prompt him to say “Hang it up, sucka!”, which, you know, makes about as much sense as the rest of the game.

But then, shmups have never been about the fluff. It’s about the gameplay, and Mobile Light Force 2 — despite XS Games’ best attempts — has it in spades. It’s fast paced, difficult enough to merit a bunch of playthroughs, and while it won’t be replacing your copies of Ikaruga or Gradius V anytime soon, it’s still a worthy addition to any self-respecting gamer’s shmup library. Drop a couple of bones on this game, but hide it — explaining the game behind the tits-and-explosions cover, as you know by now, takes a little time.