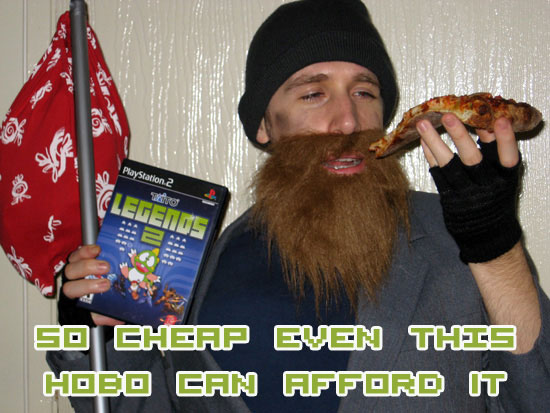 [Hey all, Linde here. I know it’s been awhile since I’ve been regular with the BBL updates, but what with review crew and Podtoid and all, keeping it up to date has been kinda tough. But rather than let the ol’ column fizzle and die while I tend to other responsibilities, I thought I’d give it to Destructoid and let the rest of the staff share their favorite bargain bin finds with you as well. Shaking things up is always groovy, yeah? We’ll have someone new doing the column every week. Same rules apply, though: the only games we’ll be featuring will be the best games at the absolute lowest cost.]

I’ve probably got some ‘splaining to do. Pictured above you’ll see the hobo I picked up yesterday at the local train tracks. He said he knew a lot about classic arcade games from his younger vagabond days, so I invited him along to help me write this week’s Bargain Bin Laden. Taito Legends Vol. 1 and 2 are both so amazingly cheap that I had some spare change after my purchase. With the extra money I decided to treat “Ringworm Ricky”, as he proudly calls himself, to some vegetarian pizza. Periodically, my altruistic side gets the best of me and I’ll place down the old Dual Shock and try to make the world a better place. “If I can save one life, I’ve saved the world entire.” That quote’s from Mahatma Gandhi (I read books by him in public so people will think I’m a good person).

Both Taito Legends collections are jammed with an amazing array of games. We’re talking over 60 full-length, arcade perfect ports spanning two discs. If you do some smart shopping you can pick both of them up together for under $20 brand new! At least half of these games completely rock and stand as loving bookends to an arcade culture that’s already slipped down the memory tube. Come join me and Ringworm Ricky after the jump, where we get down to the brass tacks of why you need to own at least one of these.

Tristero: I’m going to jump right into it. Buy these, please. I’ve never before purchased a single disc for any game system that had such a variety and multitude of quality games packed onto it. I’m a total junkie for anything that aims at recreating the arcade experience and the Taito Legends series has it down to a science. I’ve already bought about ten different classic game compilations, so I’m no stranger to the retro, virtual-mall money grabs. Taito Legends easily stands at the top of the pack based on the loving detail poured into the extra features, combined with the sheer volume of games featured.

These discs markedly set themselves apart from the umpteenth iteration of the same five Namco or Atari games you’ll find on the clearance shelves. They do this with the inclusion of developer interviews, photographs of vintage arcade cabinets and scans of original art flyers. They also do a great job of highlighting games that typically haven’t seen previous home incarnations. More than mild diversions, most of these games end up bringing a good deal of entertainment. I’d even pay $5-6 for some of these titles if they were released as individual downloads on some of the current-gen systems. Fair warning though, my tastes do overly lean toward goofy, kitsch curiosities. If you own a pair of retro goggles, slip ’em on. You’ll feel instantly at home.

Ringworm Ricky: I’ve taken showers in about twelve different YMCAs across the western half of the United States. I’m often faced with the tough choice of using my last quarter to buy the travel toothpaste at the hospitality counter or playing Space Invaders in the rec hall. But now I can play it at your house and keep my quarter for smokes. What was the question?

You make an interesting point there… about… something. You want to try a few of these games and tell our readers about them? Here, take a controller.

[At this point, Ringworm Ricky coughed blood all over my wireless Mad Katz controller.]

Ringworm Ricky: Will Mr. Destracto pay for my TB shots?

Tristero: No. He won’t. He doesn’t know I’ve subcontracted you. And they won’t pay for that controller either, so I’m docking your cab fare. Let’s throw the first volume in, Taito Legends.

Tristero: Okay, you’ve got your typical classics here like, Elevator Action, Operation Wolf and Rainbow Islands, but Ninja Kids, which I’d never heard of before, became an instant favorite of mine. It’s a fairly straight-forward knock off of TMNT 2: The Arcade Game in the way it plays, but it comes packaged in a real hoot of a story. In the first level you’re already chopping drunken Satanist gang members into bloody pieces with a ninja sword. By the time the game finishes you’ll have massacred werewolves in a hamburger joint, cut off the heads of hunchbacked old men and dodged hilarious insults from robed cult members like, “C’mon Ninja Kids. Here’s a graveyard of you.” Which ones did you like, Ricky?

Ringworm Ricky: Well, Bubble Bobble was good, I suppose. The graphics are much crisper then the NES version. I like it when the lizard put ‘dem sap suckers into a bubble and then turned them into candy and ice cream and french fries. Another game I enjoyed was Plump Pop. You play a couple of delicious pigs with a trampoline and you have to throw your scrumptious pig friend into the air to catch tasty bananas and mouth watering coconuts.

Tristero: You just chose those games because they had food in them, didn’t you? Calm down. I’ll give you that pizza I promised you after you finish the review.

Ringworm Ricky: You better not hold out on me. I was in Echo Park when someone promised me a Teriyaki Milkshake in return for my bottle collection. Let’s just say that what I got was neither Teriyaki nor a Milkshake. Honestly, the best game on here was Thunderfox. It reminded me of P.O.W. or Rolling Thunder, but with a heaping spoonful of camp. It’s been about forty years since I threw grenades off a jet ski at kung fu commandos, but it feels a lot more safe playing the game version here with you. When that chopper landed and I knicked the grenades before you got to them in co-op play … actually, I don’t like this game at all. I’m starting to get a Nam flashback so I better turn it off.

Tristero [whispers]: Ricky thinks unplugging the controller and closing his eyes in the corner “turns off” the game.

Tristero: I thought you didn’t have one. Now, get back up here and play Taito Legends 2 with me, ya big lug. I promise this one’s 100% flashback free, for better or wose. You see, whereas the first Taito Legends had a handful of cool interviews with legendary arcade developers like Fukio Mitsuji and Tomohiro Nishikado thrown in, Taito Legends 2 is a little bare-bones. But that’s okay, because it actually has more games than the first volume, and they’re better than just cold left-overs. In fact, I think I might prefer how this set focuses on shmups and puzzle games over tried and true classics. I’ve played dozens of clones of Qix, but it was cool to finally play the original arcade release.

Ringworm Ricky: I agree. The shmups collected on this disc get the fingerless gloves thumbs-up from me. Here are some shiny things I enjoyed looking at: Gekirindan‘s flaming skulls, Insector X‘s adorable bees, Syvalion‘s mechanical dragon. If it scrolls and it shoots I want to play it. I can be a bit undiscriminating when it comes to these, the same way I am when it comes to water. Fetid rain run-off still quenches your thirst, you know what I mean?

Tristero: I’m sorry, but I only drink Fuji water. But I can sympathize with your love of shooters. The real highlights here are the two different installments from the Darius series, Darius Gaiden and G Darius. These were released in the mid nineties by Taito so you’ll find some more contemporary mechanics like branching pathways that require mulitple playthroughs to fully experience. There are some awesome decisions made in the art direction: you’ll notice swirling psychedelic backgrounds and rainbow colored bosses that have a hand-drawn, personal touch.

Ringworm Ricky: We’d also be remiss if we didn’t also give the beat ’em up Growl an honorable mention.

Ringworm Ricky: Some really bad-ass poachers decide to go on a rampage and win one for America by thinning out the world’s overcrowded wild animal population. But, oh no. Some pinko, limp-wristed commies from a gay biker bar take the law in their own hands and you have to stop them before they corrupt the youth with their alternative lifestyle. Reminds me of the time Sidewalk Sally tried to up and steal my brillo pad and crack pipe, so I grabbed her by the dungarees …

Tristero [Interrupts]:  Okay, I think you’ve got the wrong idea there pal.  You’re actually supposed to fight against the poachers. And as you can clearly see from the picture above, there’s absolutely nothing gay about that animal rights activist in the pink pleather vest swinging the whip over his Louis Vuitton bandana. I resent your stereotypes, Ricky. Let’s wrap this up so you can get back to the train tracks. Folks, if you merely tried each of the 60 games on here for ten minutes a piece, it would take you over six hours. Factor in that you’ll probably find a good twenty or so that you will love and will want to make repeat visits to, and you can easily squeeze out the same amount of value you would from a gigantic RPG. If you’re trying to build a retro game collection at a cheap price, consider this an essential purchase.

Ringworm Ricky: I think we learned a lot today. Taito Legends and Taito Legends 2 are both solid collections at unbeatable prices that deserve a spin or two. We learned that the first volume includes robust bonus features while the second volume shines in the obscure wonders it unearths.

Tristero: Well put! We also learned that I am a kind person who won’t let a hobo’s personal hygeine or lack of personality stand in the way of a fun pizza party.

Ringworm Ricky: You have a home and I don’t.