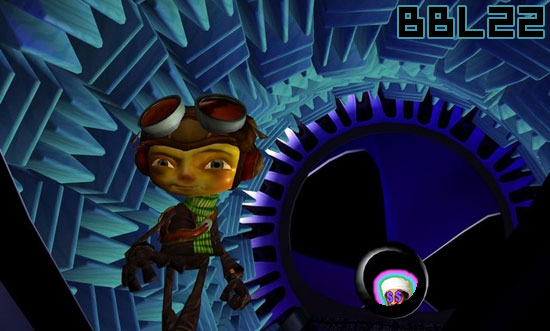 Psychonauts. Yeah, I know — sort of like Beyond Good and Evil, one of those games that needs no introduction, that almost hourly enjoys some sort of running of the mouth by one journalist or another. I’m introducing it as such to take a bit of the edge off the shock that, yeah, I fully intend to add to the aforementioned cacophony and blurt a few more words of praise for a game that is perhaps already permanently cemented into your mind. It’s what I do, baby.

As for the approach, I’ve got some options. I can take the straight and narrow route and give you the good ol’ retrospective review that you’ve come to expect from BBL, or I could spout off sizzle lines from what I’d expect Pitchfork Media to read like in Hell: “In some catastrophic marriage of genius and futility in an unforgiving industry, Psychonauts reaches for the long-forgotten wedge of the psyche that yearns to play like it was 1991.”

It’s a fine line. You can do it up right with the even hand of justice or unleash the inner fanboy, a manifestation that brings a familiar taste of equal parts vomit and orange juice to the palate. That we are locked together in this deadly tango of bargain-bin hunting and unbridled adoration, however, necessitates a bit of both. At $12.99, it’d be downright criminal to leave this game off the list, and when the day comes that one of you murders me, the bereaved will carve “never BBL’d Psychonauts” on my tombstone, right below “beloved fat guy.”

To that end, I’ve crafted a scenario that might help you out if you intend on buying the game in the form of a text adventure. To quote 15th-century poet Ronnie James Dio: it seems like desperate measures, but sometimes it’s got to be done.

You are in the food court in a large shopping mall. The bustle of commerce, overworked mothers with corrals of screaming kids and hulking football jocks chasing underage girls are all around you. In your pockets you feel a hunk of cash that totals somewhere around nineteen dollars. To the north you see a GameStop, its sign glowing like a neon pyre beyond some clothing shops and an Orange Julius. To the west is a Hot Topic, where fat goth chicks are comparing suicide scars. In the display window you see a Mega Man t-shirt on a rack, a sign of your culture being co-opted by people who were never beaten half-retarded for being geeky in high school. Those fucks.

A cloud of misery and failure blocks your path. You cannot proceed.

You see a GameStop. Your wallet aches.

Did I say wallet? I meant wad of cash. You have nothing else in your pockets except a burning desire to continue on your quest. Examine that, jerk.

I can kill you, you know.

You are standing in front of GameStop. For reasons unknown, a small unattended boy of about 12 is tearing shelves asunder and screaming a wide variety of curse words that are most likely not acceptable around his parents. The employee at the counter seems exhausted, flabbergasted, and without option.

That’s the spirit. You tap the child on the shoulder and identify yourself as a family friend and ask if they told him about his adoption and real parents yet. The child sobs and runs out of the store. A tranquility sets into the store as the clerk welcomes you. “Anything I can help you find?”

The clerk looks confused. “Psychonauts? I’ve never heard of that game.” You describe the game briefly as a platforming adventure that, while not as commercially successful as the developers would have hoped, enjoyed widespread critical acclaim and remains a cult classic for gamers around the world to this day. “I’ll check the system,” he says, looking up the title on his computer.

While he searches you make clear your intentions to purchase the Xbox version of the game, as the PS2 port suffers some pretty vicious slowdown and doesn’t look nearly as pretty as a game with such outstanding art design absolutely deserves. The clerk offers a half-interested nod and continues his search. “Looks like we’ve got one copy. I’ll get it for you. Did you want to reserve anything today?”

The clerk looks dismayed. “Psychonauts is, like, two years old. Don’t you want Halo 3? We’re only getting enough copies to meet our pre-orders, and you won’t be able to find it anywhere after that.” He’s a lying sack of shit.

>give money to clerk

The clerk sighs and digs the game out from behind the counter. “So what’s so great about this game anyway?”

>geek out at clerk

You insist that Psychonauts is one of the best platforming games on any system, carrying on the gameplay traditions of forerunners like Banjo-Kazooie and combining it with Tim Schafer’s brilliant design abilities as demonstrated in previous work such as Grim Fandango, Full Throttle and The Secret of Monkey Island. The creative character designs and stunning level design, particularly when invading the deeper reaches of the various subconscious minds you’ll meet on the way, mark it as one of the most visually appealing titles of its generation. It’s an insanely funny adventure that owes a great deal of its value to the talented scribes that penned the rich story that serves as the game’s backdrop. It’s not only a gas to play, you stipulate — it’s one of the best-written games ever.

The clerk scoffs. “Reading is gay. What kind of multiplayer does it have?”

That wouldn’t be appropriate, not here. Maybe in the parking lot once his shift is over.

You set aside your burning fury to a place in your mind where it can be unleashed upon the innocent at a later date. You tell the clerk that it has no multiplayer, but is challenging and engrossing enough to make you wish that more developers would take risks, forsake the shallow multiplayer campaign route and devote more time to crafting such an excellent single-player experience as can be had in Psychonauts.

The clerk looks confused. “How many guns does it have? What vehicles? Hey, you know who rocks? Marcus Fenix. That guy fucking rocks. $13.68 is your total, by the way.”

You hand the sweaty wad of cash to the clerk. While he’s ringing up your purchase, you note that combat in Psychonauts is also heavily tied into its concept and art design, taking advantage of the “psychic adventure” end of things and exploring creative ways of fighting, manipulating your environment and getting from A to B utilizing a litany of psychic abilities. You offer him a weak smile, the sort that says ‘that’s cool, right?’, in effort to appeal to your shared heritage as gamers.

There is a protracted silence as the clerk stares blankly at you. “Listen,” he says, “That sounds cool and all, but if I don’t get enough pre-orders for Halo 3, my boss will yell at me. Come on, it’s the best game of all time. Seriously, my dad works for Microsoft, I already have a copy. It’s awesome.”

A sharp pain hits you in your lower abdomen. Your breathing seizes up. You begin bleeding internally!

I warned you, dude.

That’s more like it. Now take your game and leave before something worse happens to you. Want to know what it feels like to have worms eating away the part of your brain that governs hormonal distribution? And here’s a follow-up question: ever think to yourself “gee, I’d like to have breasts”?

You pick up the game and turn to leave. The clerk wistfully wishes you a good afternoon, returning to his daydreams of Master Chief soaked in baby oil.

You are outside of GameStop.

You are carrying:
One of the best damn games ever made
Your dignity

Filed under... #Adventure Games#Bargain Bin Laden#Cooler than the other side of the pillow