Today, BBL rolls up on the big two-oh. I was planning on some grand gesture to celebrate, like some sort of Destructoid team photo where we’re all fighting each other while riding bears or something, but I hear that’s illegal in these parts, so I’ll just have to do it this way: thanks for reading, gang. Didn’t expect to keep crackin’ at it twenty installments later, but I’m sure glad to have the lot of you along.

Twenty, though, is an important number. I can’t just let this one slide with something weak, something less than exceptional — I must pull out the big guns! So, rather than just expound the merits of this week’s selection, I’m going to tell you a tale of murder, intrigue, betrayal, and ultimately redemption. Gunstar Super Heroes is a hell of a game and cheap to boot, but it doesn’t come without some… complications.

Hit the jump for the complete saga.

My copy of Gunstar Super Heroes was delivered on a sweltering July afternoon. Being that it was much too hot to be outdoors anyway, I figured a formal introduction was in order. I marched inside, nabbed my DS, and got to playing right away. Immediately, I was entranced by the fast-paced action gameplay, the complicated and often ingenious level design, and stylish execution that rivaled its predecessor, Gunstar Heroes. This game was fantastic, and unbelievably cheap — I had found one of the GBA’s greatest gems, and under ten bucks. This, I thought, was great BBL fodder.

Gunstar Super Heroes and I were quickly becoming fast friends. I worked my way through the game’s exceptional single player campaign rather quickly and started work on hard mode, which was true to its name and absolutely brutal. There were, however, other things to be done, other games to be played, and features to be written. While Gunstar Super Heroes had taken up permanent residence in my DS Lite’s GBA slot, I just didn’t have the kind of time I needed to get through hard mode. It wasn’t pleased.

“Hey, chief, what gives? It’s been almost a week since you gave the Moon3 level a shot. How ’bout it? You’ll lose your edge if you don’t keep at it.”

“Sorry, Gunstar Super Heroes, I’m working on a feature on Killer7 — I don’t really have the time right now.”

“I promise we’ll get back to it soon.”

“Sure. Whatever,” it scoffed. It was none too pleased — though I’d find out later that evening just how pissed off Gunstar Super Heroes truly was for what had become a cycle of neglect. 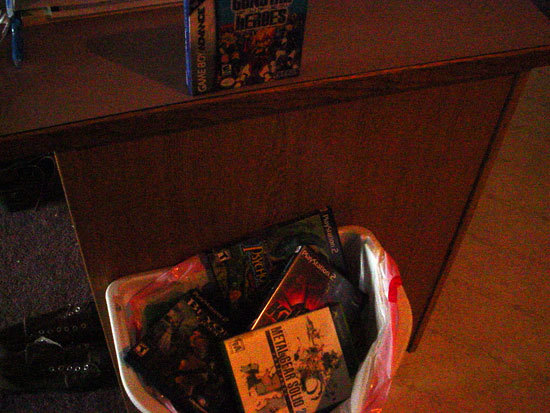 Coming back from running errands, I found Gunstar Super Heroes perched on my kitchen countertop. “The PS2 version of Killer7 is really inferior to the GameCube version, you know. I took the liberty of disposing of it for you, along with some of the other crap multi-platform games you’ve got in your collection.”

“Aw, Gunstar Super Heroes, I liked those games, even with their crummy frame rates and poorly-translated control schemes. Why’d you have to go and do that?”

“I can’t have you playing inferior games, Aaron,” muttered Gunstar Super Heroes, “And now that the dirty work is done, you can get back to hard mode Moon3. How ’bout it? We’ll make a night of it.”

I marched out and slammed the door. Yeah, the game was good — no, it was great. But that’s no reason to behave like that, behave like it was the only game I owned, my only obligation. I wasn’t about to be treated like that. I got home late, crept into my bedroom, and went to bed. Hours later I was awoken by a terrible jabbering coming from the bathroom. 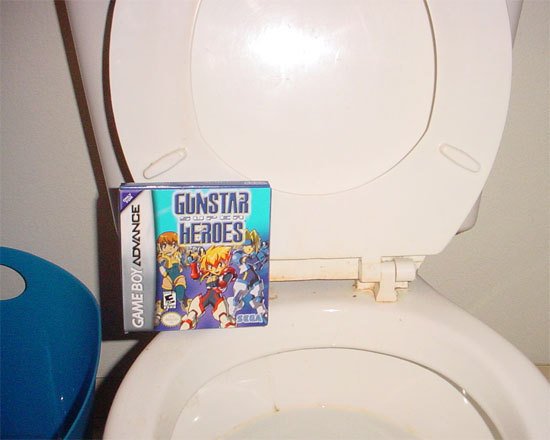 “You’ll never play me ever again! It’ll never be like it used to be!”

I stumbled into the bathroom and tried to pull Gunstar Super Heroes away from its would-be watery tomb, but its hand trembled upon the flush lever. “Don’t come any closer!”, it cried.

I had to think quickly — Gunstar Super Heroes might’ve been a lot of things, but the sort that would fake this kind of thing was certainly not one of them. “Okay, okay — look, I’ll go get the DS and we’ll play right here. I’ll play until I beat hard mode with both playable characters, okay?”

The situation had been disarmed. I kept my promise and stayed up ’til the wee hours trying to beat the game on hard mode, but I had lost my edge in the time spent away. With a cheerful smile, Gunstar Super Heroes said “Don’t worry, we’ll just play every night ’til you get it down. How does that sound?”

I muttered a series of curses under my breath and nodded.

I found a sort of balance with Gunstar Super Heroes, finding time between other projects to play enough to keep the little shit happy. Unfortunately, things between my roommate and I became a bit hairy — he hadn’t paid his share of the cable bill and my internet connection was about to be shut off. Being a Destructoid editor who lives and dies by his innanets, this was a bit of a problem. I sulked in the living room, wondering what I could do — I didn’t have the scratch to poney up his share on my own. Gunstar Super Heroes settled on the couch next to me. “What’s troubling you, big guy?”, it asked.

“Oh, nothing major, Gunstar Super Heroes. Money trouble. My internet connection might be shut off tomorrow.”

“That’s a problem,” it said. “Want I should do anything about it?”

“Like what? Unless you’ve got thirty bucks just lying about the place, I don’t think there’s much you can do.”

Gunstar Super Heroes smirked. “We’ll see about that, chief. Don’t worry, everything’ll be right as rain tomorrow.” The next morning, I awoke to find my roommate killed, his organs harvested, and my cable bill paid through 2009. 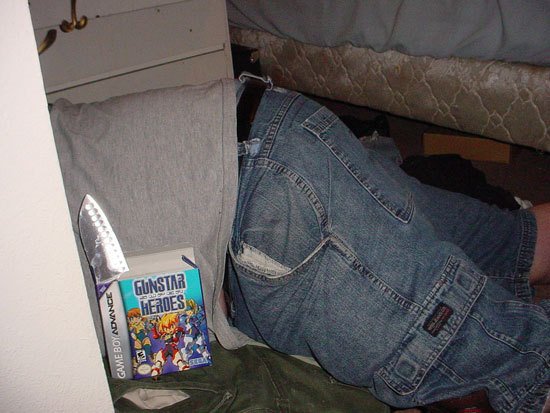 I caught the little bastard in the act. I disarmed it with a well-aimed judo chop to the throat and tackled it to the ground. “Gunstar Super Heroes! What in God’s name have you done?”

The little GBA cart gave me a bashful look. “I know, I know, I didn’t have to go the extra mile. But we’ve had so many good times, I thought — well, I wanted to do something nice for you. Hey, go check the closet!” I did. Inside was a Styrofoam ice chest, the contents of which I cannot reveal in polite company. Reviled, I stumbled backwards and fell into the hallway.

“That’s worth some $30,000 on the black market. I know a guy.” Gunstar Super Heroes danced its little hideous dance. “Now you can pay off your student loans!”

Yeah, Gunstar Super Heroes is a great game. It’s challenging, rewarding, and so chock full of different experiences in one single game that it’ll make your head spin. The graphics are some of the best the GBA has to offer, and at a price under ten bucks, you just can’t lose with a game like this one. Just don’t turn your back on it, or it’ll kill your roommate.

See you next week, gang!