This week’s selection ain’t exactly obscure, but it is one of the best RPGs ever made. If you haven’t already played Dragon Quest VIII, it’s likely that you’ve spoken with someone who has, or read one of the thousand glowing reviews, or had someone angrily hoist it upon you as a replacement for that copy of Magna Carta you almost bought. Maybe you’re on the fence about DQ8; a game you’ve been meaning to get around to playing but simply weren’t motivated to track it down. Maybe the promised 70+ hours of play scares the holy bejesus out of you.

Don’t be scared, lad. Dragon Quest VIII is RPG gaming at its very finest, and the work of a developer at the absolute top of their game. If you’re wondering why everyone’s so hyped up over White Knight Story on the PS3, look no further than Level 5, creators of the Dark Cloud series, Rogue Galaxy, and the forthcoming Jeanne d’Arc on the PSP. They knocked it out of the park.

So, this one goes out to all y’all who need a shove in the right direction. If you’re interested in one of the most epic, finely-tuned and masterfully created games ever created for under ten bucks, this is the game for you — read on and I’ll tell you why. The rest of you, well, read on anyway and join me in some slightly premature nostalgia for one of the PS2’s greatest games.

And be forewarned: this installment of BBL is epic in length, much like the game that it features.

Dragon Quest VIII (PS2)
Developed by:  Level 5
Released: November 15, 2005
Bargain Binned: Current MSRP is $20 for new copies (Greatest Hits’d), which means used copies are damn near everywhere for damn near every price. If all else fails, look for copies with cheap shipping and very few bids on eBay — you can snag one for six to ten bucks.

As flagship franchises, long-running RPG sagas and other series move onto next-gen platforms, you hear a lot of buzzwords kicked around like “reinvention”, “innovative”, that kind of thing. We allow developers the luxury of banking on previously-generated product rather than creating something new in the hopes that they take some of our favorite games and make them into something even better. Therein lies an entire history of the Halos, Marios, Zeldas, Final Fantasies and Castlevanias of gaming; for a series to persist, it has to change, evolve, grow — or, if you’re Halo, have three or four different guns and high-def graphics.

Meanwhile, Dragon Quest has tromped forever onward through more than twenty years, eight titles and a slew of series off-shoots. Though its spin-offs have explored a variety of different styles of play, Dragon Quest itself has remained very much… well, itself. Dragon Quest has kept so traditional in its development that the announcement of Dragon Quest IX‘s action-RPG style redirection threw more than a few fans of the series into fear-induced comas. Fortunately, that change has been repealed since the announcement. And did you know that DQIX is rumored to be the first multi-cartridge game? The thought of making something like that work blows my Goddamn mind.

Anyways, Dragon Quest — well, let me put it this way. Dragon Quest VIII, in all the ways that are important, plays the way that every previous Dragon Quest game plays. The core of the series, the battle system, serves as the standing model for what we commonly refer to as the “traditional RPG” — turn-based, small damage model, simple spell system and an overall streamlined experience. It’s basic, but it’s damned addictive. Dragon Quest VIII succeeds beyond its pedigree by doing something phenomenal, something most sequels neglect to do: carry onward the best assets of the games that came before it, and improve by leaps and bounds the elements that surround those assets.

It’s a game that is, in almost every respect, damn near perfect. 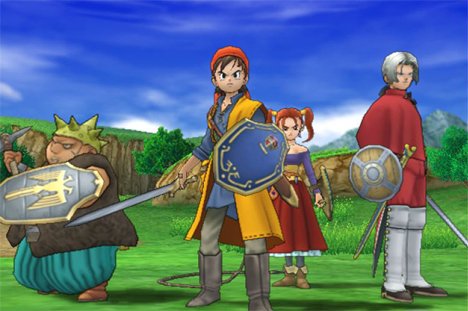 The story of Dragon Quest VIII is refreshingly basic, not so convoluted as recent titles like Xenosaga or Final Fantasy Tactics. The unnamed hero, a guard at the castle of Trodain, is the sole survivor of a massive curse unleashed upon the kingdom by an evil wizard named Dhoulmagus. Well, maybe not the sole survivor — while the bulk of the castle’s inhabitants had been turned to stone, King Trode and his daughter, Princess Medea were warped into slightly more undignified forms — a little toad-like troll and a horse, respectively.

The journey opens in the thick of things as the Hero, reformed cockney ne’er-do-well Yangus, the King and his equine daughter continue their pursuit of Dhoulmagus, who has fled to parts unknown. Along the way, the adventurers meet two companions — Jessica, an aristocratic sorceress, and Angelo, the game’s token tail-chaser swordsman — who have been similarly touched by Dhoulmagus’ treachery.

These six characters will be with you throughout the entirety of the game, which is plenty of time for the narrative to build up some really, really interesting relationships between them. At any time throughout Dragon Quest VIII, the player can opt to consult with the other members of the party, who will provide hints for the next step in the plot’s progression or just add some colorful commentary to the proceedings. Each of the four characters, as well as the King and his daughter, have very well-developed backstories that unravel in such a way that is profoundly well-paced; you’ll never be in a rush to advance the story, because there’s always something interesting to learn about these characters. By the endgame, they feel like family. Especially Yangus, because he fucking rocks.

It’s a simple story, but absolutely epic in scope and feeling. No other game will make you feel like you’re really saving a world quite like Dragon Quest VIII does; a result, no doubt, of the confluence of its many polished elements. But we’ll get to that in a minute, let’s dig into the good stuff: the gameplay.

I can’t exactly explain to you what is so compelling about the battles in Dragon Quest VIII. They’re very simple, but they keep you on your toes. Combat is a simple, turn-based menu command fare, turns and attacks and damage all determined by stats as opposed to combos, or air juggles, or any number of the complicated x-factors introduced by other modern RPGs. Hit points, damage, and so on is on a much smaller scale than you’re probably used to, which is to say your characters won’t hit over 200 hit points until maybe a third of the way through the game.

The enemy AI is so rugged that you must plan your battles if you’re going to survive; you can’t just slam buttons and expect to walk away victorious. Enemies will gang up on weak party members, call for backup, and do all kinds of unexpected stuff to keep you on your toes. Unlike 90% of the encounters in, say, Final Fantasy III DS, every battle is important, essential, and therefore, fun.

Character development is hinged on your basic level-based system with a twist: at every level up, you’re allowed a number of points to be allocated to one of five skill trees: three weapon types, fisticuffs (bare-handed), and a unique attribute (the Hero has “Courage”, Yangus has “Humanity”, and so on). It’s not likely that you’ll be maxing any of these out until late in the game, so you’re called upon to commit to your characters’ development paths if you want to see some of the really powerful abilities. It’s a might constrictive, but like anything else in DQ8, it’s something you can’t just stumble through. 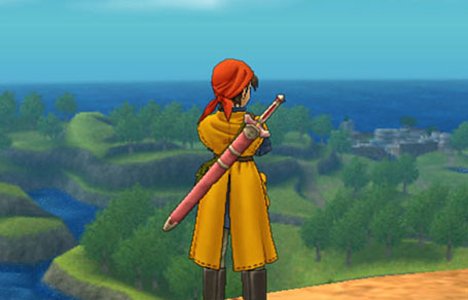 Did I mention this is one of the most beautiful games ever made? Unlike previous iterations in the Dragon Quest series — and, hell, most RPGs — the world map and the towns that dot it are nearly 1:1 in scale, like an MMO. That is to say, the world that you’re walking around in as you make your way from one location to the other is fully realized, massive, and stretching on as far as the eye can see in every direction. It’s amazing. This isn’t to say that the developers skipped on the dungeon designs, either — while DQ8 has its fair share of Standard Cave Dungeon #2198 and the like, many of the dungeons are truly inspired.

On top of this, the manifestation of Akira Toriyama’s classic character designs into living, breathing 3D is reflected in every character and monster you encounter. The characters, particularly the leads, are magnificently crafted and look as though they were pulled straight from a cartoon. There are myriad expressions and gestures to compliment dialogue that really draw the eye to detail. To see such classic monsters like the trademark slimes and golems so expertly recreated in three dimensions is absolutely breathtaking.

New to the the North American localization of DQ8 is full voice acting for all points of plot progression and cinematics, and God damn, they’re done well — arguably some of the best voice acting in a game to date. Additionally, the original Japanese soundtrack was replaced with the symphonic suite, which really draws the whole “epic story” feel further and further as the game progresses.

If this sounds good to you, you might not be so terrified at the thought of an eighty hour RPG. That’s an estimate, but it’s likely. The game itself will consume maybe 3/4 of that, leaving the remainder to the myriad sidequests and optional content you’ll find within the game. DQ8 offers a robust item creation system in the form of the Alchemy Pot, a casino where you can win rare and valuable items and equipment (which, in turn, can be forged into even more awesome items and equipment in the Alchemy Pot), and a spectacular monster arena game. And finally, DQ8 offers a phenomenal post-game with a huge and absolutely insane hidden dungeon, in which the best equipment and most ferocious enemies the game has to offer can be found.

Believe me when I say that this is a game that no RPG fan should be without. It’s become incredibly cheap as of late and, therefore, you have no excuses. Dragon Quest VIII is, at its most essential, the paradigm of the traditional RPG and one of the most ridiculous cash-to-play purchases available on the market today. Don’t hesitate! Buy this game!