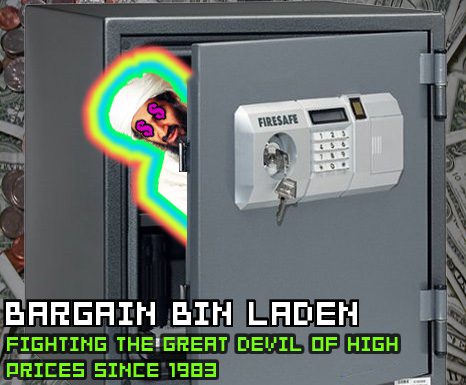 You kids and your next-gen — flirting with financial ruin, that’s what you’re doing. $300-$600 for a new console? Sixty bones for a game? Hogwash! Why sell off your kidneys, your firstborn, and your firstborn’s kidneys for the scratch to feed your gaming habit when there’s a bounty of absurdly cheap last-gen titles just waiting to be purchased?

Welcome, friends, to Bargain Bin Laden — a swirling Lovecraftian mass of frugality speeding through the intertubes with the sole purpose of helping you find the best gaming experience on the most limited budget. My goal is to raise awareness of the gems that populate many bargain bins in game shops everywhere, and to drill into your little skulls that they aren’t all copies of NBA Inside Drive 2003 and Turok Evolution.

Though many of these games have passed under your radar, I’ll slap my personal guarantee that they’re some of the finer experiences to be had on your consoles. Niche titles that fill holes in your library that no other game could occupy — all at prices so low they constitute economic terrorism!

This week we’re featuring Seek and Destroy, released four years ago today. It’s easily one of the ugliest games ever released on the PS2 and an alumnus of the Inappropriately Localized for US Audiences Club, and also happens to be damn fun. Hit the jump for the full story and find out why you must own this game.

Seek and Destroy
Developed by: Takara
Original Release: December 12, 2002 for $9.99
Bargain Binned: Lots of places, but look for it used — you’re not likely to find new copies anymore. $4.99 pre-owned at GameStop.

Before we dig into Seek and Destroy, I want to tell a little story about how I originally came across it. Over the summer and well into the Christmas season of 2002 (oh god, so long ago) I was working at an EB Games in Spokane, settled on the eastern frontier of Washington State. In the weeks leading up to the holiday we were flooded with useless product, massive hunks of plastic not worth the boxes they were packaged in. You know the sort: little gimmicky items for the ne’er-do-well dads that would invariably stampede into our store on Christmas Eve because they forgot to buy a present for little John Q. Gamer.

Three days before Christmas, during my last shift before my holiday officially began, I bought several of these items as gag gifts for my buddies. My friend Rodney, I schemed, would get the worst of it: some shit-lookin’ game called Seek and Destroy, a hideous PS2 game with N64-grade graphics and a cover image tailored perfectly for the post-9/11 world. At first glance, it looked like the worst game I had ever seen.

When I saw him next, Rodney was some fifteen hours into the game. He had customized his tank, progressed very far through the single player campaign, and showed me all of the features that he had grown so fond of over the Christmas holiday. He said it was the best present he received that year. I had failed. My gag gift crappy-ass game turned out to be good — proof positive that graphics are never a surefire means of determining a game’s quality.

Seek and Destroy is the American localization of a game called Shin Combat Choro Q, a process that stripped the game of any imagery that would display it for what it is: a wacky Japanese vehicle-based RPG in an illustrious line of wacky vehicle-based RPGs. You know this series, even if you don’t remember it; previous iterations in the series to appear in overseas markets went by names like Penny Racers, Gadget Racers, and Road Trip. Choro Q HG 4, a more traditional Choro Q title, was released in the US fairly recently as, quite simply, Choro Q. The packaging for Seek and Destroy, like that of other bizarrely localized titles, betrays its true nature: there are no rippling American flags splayed across burning countryside to speak of in the game itself. No America, either.

Like any other RPG, Seek and Destroy bows to certain conventional mainstays of the genre, like a world map and leveling up (in this case, masked by an Armored Core-esque tank customization system). It even has a ton of dialogue — spoken not by men within tanks, but by the tanks themselves. While cruising a town, one speaks to NPCs by simply driving up next to another tank and hitting the X button. It works, because in this world, there are no people — only tanks. Little baby tanks. Mother and father tanks. Tanks performing surgical procedures (colloquially, repairs) upon other tanks. Only a handful of vehicles in the game don’t speak, they being the soulless automaton trolleys that, presumably, transport tankpeople from place to place within a city. Despite absolutely insane circumstances, the game manages to keep a semiserious tone throughout — a thrilling drama enacted by, you know, tanks.

For a budget title, Seek and Destroy has an alarmingly robust combat system. The control is smooth, the action is quick, and the battles can be quite invigorating when populated by entire squadrons of warring battle tanks. Seek and Destroy features fairly simple controls that make for a great arcade style experience — fighting boils down to point and shoot. Turret angle and control is handled by the Dual Shock’s right analog stick, allowing for some really precise volleys into groups of enemies if you so choose.

The graphics are god-awful, evidence that the game is obviously an upscaled PSOne title that never saw release. The textures are muddy (oh god, the world map) and the tanks are comprised of maybe — maybe — six or seven polygons. Don’t expect anything flashy here, kids. You can destroy everything around you, but the destruction of these objects is horrible and rudimentary. Buildings collapse entirely when hit by a shot from even the weakest tank, and their ruin is marked by a simple (and completely straight) sinking into the ground, where they’re replaced by the same pile of rubble almost every time. But you’re not expecting AAA graphics in a budget game, are you? Good.

Where Seek and Destroy really shines is the tank customization, a system almost as deep as what you might find in an Armored Core or Front Mission title. You can equip your hulking behemoth with a wide assortment of weaponry, armor, and other gadgets. In this way, you can create a tank so bizarre that it simply must be an affront to at least five major world religions — for example, you can strap on some hover jets to make your tank fly. Unlikely, sure, but awesome nonetheless. Combine this with the chainsaw turret attachment and you have a creation that will make even the most amateur mobile armor enthusiast’s brain leak out of his ears. Any game that allows for the creation of a flying chainsaw tank is worth the price of admission for that reason alone.

Something to consider when shopping for bargain bin games is the price-to-fun ratio. You’re bound to play some crappy games when searching the seedy underbelly of the gaming industry, so here’s the big question: how much suck are you willing to put up with given the money you’re saving? In this case, I can’t think of any reason not to pick up Seek and Destroy. The graphics are horrible, the destruction models are crap, but you’ll get so much mileage out of this game that five bucks will seem like virtually nothing after a couple of hours. Buy this game.

Thanks for joining me for the inaugural Bargain Bin Laden, gang. Check back next week when we grind Sky Odyssey‘s wings into bloody stumps!