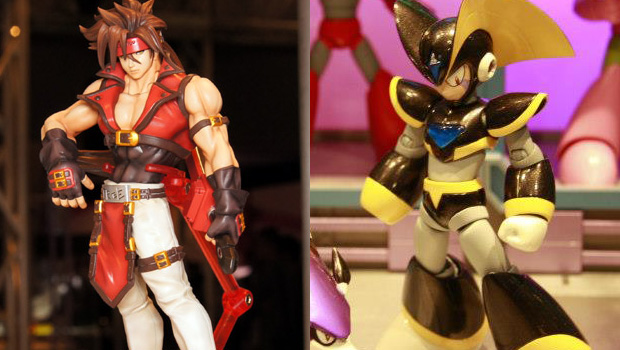 At the recent Tamashii Nations exhibition in Japan, Bandai has been showing off a ton of sweet new game-themed figurines as part of its D-Arts and Figuarts ZERO lines.

We start with some Guilty Gear action in the form of D-Arts Sol Badguy, joined by Hakumen from spiritual successor series BlazBlue. Alongside the recently revealed D-Arts Mega Man and Rush is their brooding counterparts Bass and Treble. Rounding out the D-Arts line are figurines of Pokémon‘s Mewtwo and Charizard, with Blastoise and Venusaur’s feet just barely visible at the top edge of the photo.

In the non-poseable Figuarts ZERO camp, we’ve got a trio of ladies from the boobtacular Senran Kagura series on 3DS — soon to be on PS Vita as well. Asuka appears in five different colors, and fans can vote on which color they prefer for the final build. Finally, Yomi and Yumi… well, I’m sure you can make your own comments about their battle-appropriate attire.

Also part of the lineup are the latest X series figs that include Sigma, Black Zero, and Vile’s Ride Armor, but they’re the same models we’ve seen previously. I just want to know when I can start buying these puppies. I’m want them here, in my house, yesterday.