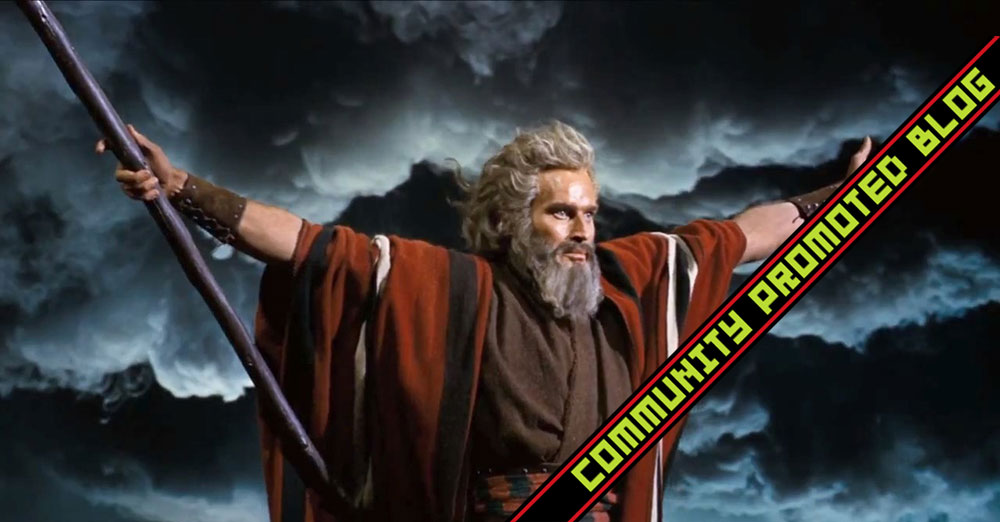 [The Actual Charlton Heston reviews the best game about walking for the Band of Bloggers prompt, The Forest. A game where you walk, very quickly, away from mutant cannibals. Want to see your own blogs promoted to the front page? Start your own blog! ~Marcel]

Hi, my name is The Actual Charlton Heston, and the only thing I’m qualified to be writing is the menu at Denny’s. I’d like to take a moment, though, to talk to you/at you about a game: The creators of said game called it The Forest, and it is undoubtedly a video game which you can currently purchase and play in real life, and it takes place in a forest. Pinkie swears, totes didn’t make it up.

See? I don’t have the Photoshop chops to make that. I also don’t have Photoshop, so it’s absolutely a real thing

Anyshits, this game, yeah? We’ve established it’s a game? Cool. This game sees you, the protagonist surviving, Robinson Crusoe-style, on an island after your plane crashes. Sans the overt racism, and with the obvious modern amenities, like iPods, and fleshlights.

That’s because you haven’t met your neighbors yet. They are all mutant cannibals. Each and every last one of them would like nothing more than to rip your dick off and plant it in the soil in the vain hope that it will grow into a dick tree that they can harvest and use to sustain future generations of mutant cannibals. Look, I didn’t invent socialism folks; but these fuckers perfected it.

Digressions aside, this game has everything necessary to make it in to this month’s theme: You’re in a forest, you can walk around in it, and it is a real video game. You’re reading this. You’re in this with me: You have wasted your life as badly as I have. Let’s get down to brass tacks.

With those out of the way, let’s continue.

The game begins with a plane crash. Should have said “spoilers ahead,” but it’s in the first god damn trailer on the Steam store page, this is partially on you.

Anyway, you have to find your kid or some shit, I dunno. I’m on day 65 and, honestly, I forgot he was even a factor. I got distracted by all of the cannibal hunting and fortress building. You know how it is. Kid’ll be fine, character grows out of adversity, after all. Plus, after 65 days, there is no way the mutant cannibals have not eaten him. It’s what they do.

I may be a bad father, but I did build a treehouse; if he’s alive, he’s going to be totally stoked to see this shit

The game is primarily about survival: You need food, you need water, you need warmth, and you absolutely need to avoid fighting packs of cannibals, because for real, you’re basically on their lawn and they are all – each and every one of them -Clint Eastwood in Gran Torino. I won’t spoil anything beyond the basic cannibals. Let it suffice to say that you should tread as lightly around them as you would at a friend’s house during a sleepover, if your friend had really physically abusive parents. Don’t expect to trounce these guys like you’re Carl Weathers or something. 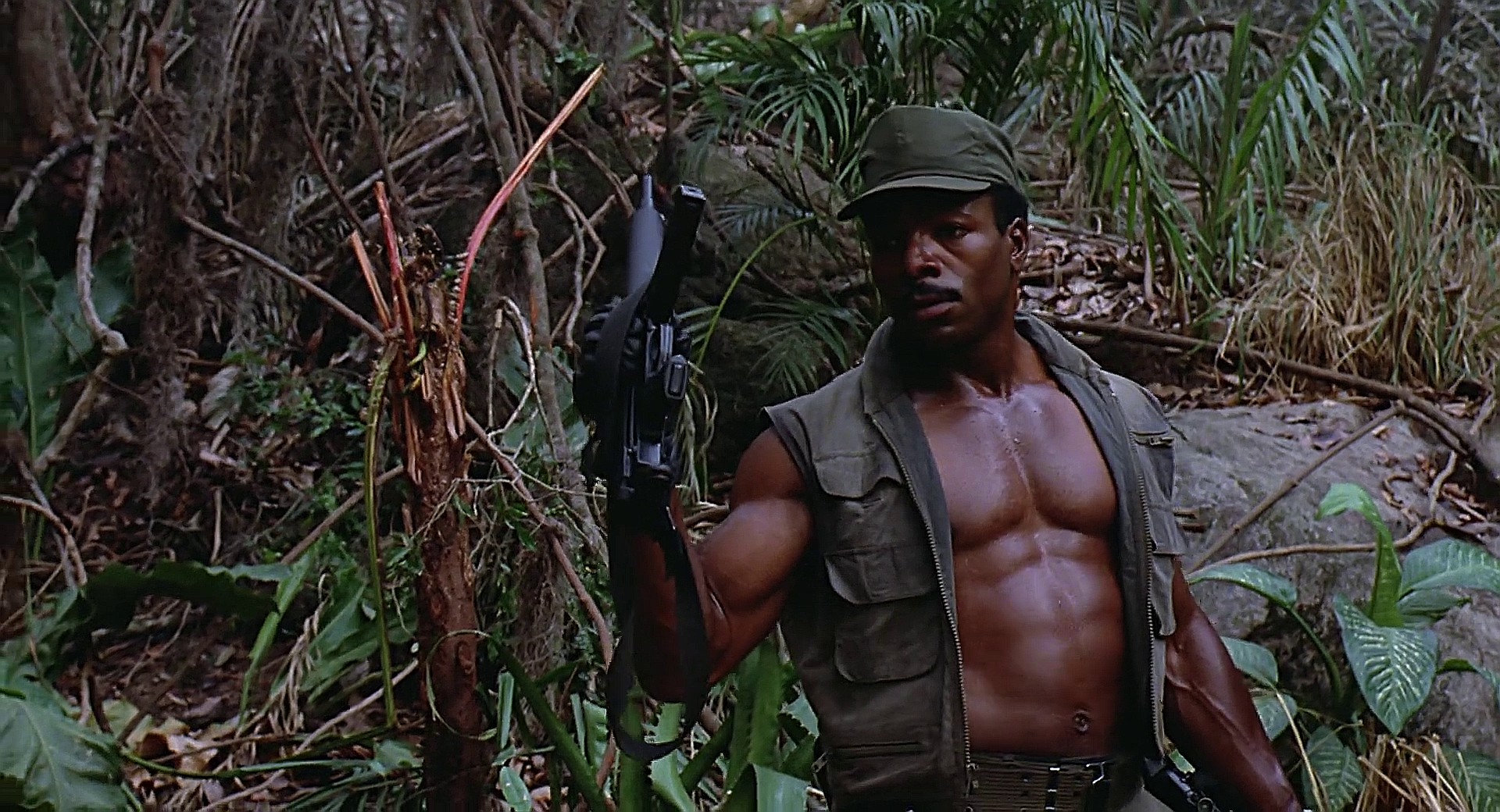 If I had guns like that, I’d be married to Carl Weathers by now

Look, I’m no reviewer. I’m a man easily pleased. I’d never presume to tell you that my opinion should dictate whether or not you play a game. My opinion is worth little, and it should be treated with disdain and derision. I will, however, say this much: The Forest made me feel, for a few brief moments, what it was to have a son I truly did not give a shit about, because he is on screen for all of 20 seconds before every horror imaginable is foisted on you and the cortisol overload takes over. You WILL kill cannibals. This is a given. You WILL forget your son needs rescuing after you take your 89th stealthy stroll through the woods in search of rabbits to kill, lizards to skin, and clues to find.

Meet your new neighbors; some of them are Mormon, but none of them wear clothing, just like in real life

There is much to be gained in playing The Forest. You might learn to distrust every sound, every rustling bush, every yelp in the distance that sounds too inhuman to have been bellowed out of a human throat. You just might decide to build a treehouse, as I did, and hunt that which hunts you by the light of the moon, your zeal for their blood your only objective. You might actually try to find your kid, which, yeah, Child Protective Services probably isn’t going to let your parental negligence slide, so you’d probably better get on that.

Build ziplines, play guitar solos in your head as you zip and zap on ’em. Find weapons and necessities in the deepest, darkest caverns, teeming with horrors you can barely see until it is too late. Take a shit off the edge of a cliff while ordering a set of tea cups from SkyMall, for all I care, just know this: they have your scent, these creatures. They will assail every fortification you build. They will come at you with numbers unending. And then you can kill them with cleverly placed traps and pure, animal rage, cutting off their body parts, and building a burning effigy out of said parts to ward off future attackers. The world is your oyster.

Shit, nevermind, the world is not your oyster, just run

If you have childhood abandonment issues, I’m not sure I’d recommend The Forest for anything besides exposure therapy. Look, it’s a given at this point that my son is dead. He is now fertilizing an ill-conceived dick tree on the peninsula, somewhere. But, if you enjoy stabbing mutant cannibals in the throat with make-shift spears, building deadly traps and unassailable fortresses, and generally fucking with what would have otherwise been a stable ecosystem? You should probably play this game.

And I guarantee this like I guaranteed my failed line of brake pads: Heartily, but with much regret in hindsight.