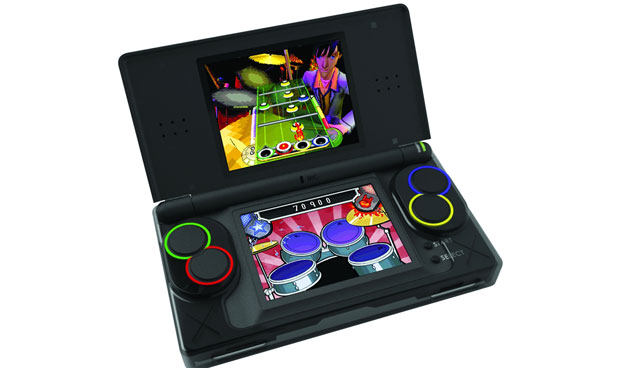 Activision has announced that it will be bringing Band Hero to the Nintendo DS Lite this year, introducing full band play to the portable Hero franchise for the first time.

So how’s that going to work? With the new Drum Grip peripheral (pictured above), players will be able to tap along to 30 master recordings from artists like Blink-182, Avril Lavigne, The Killers, KT Tunstall, and Fall Out Boy. Wannabe vocalists can sing into their DS microphones, and guitarists and bassists can use the Guitar Grips introduced with Activision’s Guitar Hero: On Tour titles. Players can jam out wirelessly, and like Band Hero and Guitar Hero 5, can play using any combination of instruments.

The game also adds a “Rockstar Editor,” a “No Fail” mode, and something called “Stage Stunts” to the mix.

It’s interesting to note that the Drum Grip (like the Guitar Grip) won’t work with the recently released DSi; both peripherals utilize the Game Boy Advanced cart slot that the DSi doesn’t have. While Nintendo maintains the DSi isn’t meant to replace the DS Lite, it’s really only a matter of time, isn’t it?

We’ve put in word to Activision to see if they have any comments on their future “Hero” plans for DSi. We have a deep concern that not everyone will be able to rock on the go, and this upsets us.