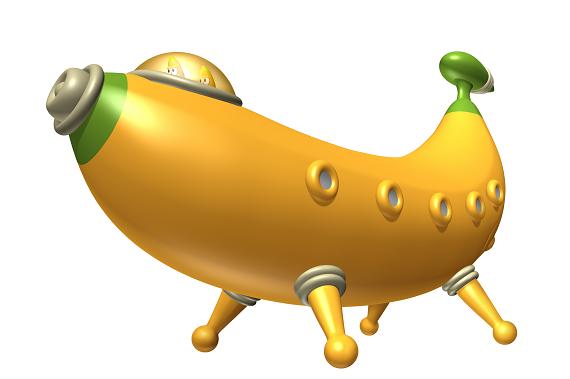 See what I did there? It’s funny because there’s a ship, and it’s a banana. And “boat-load” means “a lot.” It’s also funny because it happens to be the name of a Polish vocal group, as well a brand of sunscreen. I was going to throw in a picture of hot Banana Boat girls until I realized that I was actually thinking about Hawaiian Tropics. But I digress … it was Nick’s joke anyway.

Moving on, DK Jungle Climbers, due out in September for the DS, is the spiritual successor of the GBA’s DK: King of Swing. Unfortunately, I might like the older game’s art style a little more. For some reason, I’m overwhelmingly ambivalent about the new batch of screens in the gallery. They’re just not crisp, which is a shame because we all know what the DS is capable of.

On the other hand, the gameplay looks fun, frenetic, and addictive. Judging by these shots, it seems like that obnoxious piece of hardware between the two screens won’t obscure the dual-screen action too much.

So guys, does a game involving Banana Aliens crash landing into Donkey Kong’s jungle (in what appears to be the most phallic of ships) pique your interest? Or do you wish that Rare would get it’s act together and make another DK platformer, harkening back to the 16-bit days of yore (and Donkey Kong Country)?

Oh, and if your insatiable thirst for all things primate isn’t satiated, head over to Poetic Justice’s blog for some new Donkey Kong Jet footage.