Time for another Badass of the Month Club, wherein the staff highlights a character or industry figure of noteworthy badassery. Warning: foul language and some minor spoilers ensue.

Easiest article to write ever.

Travis Touchdown’s name is Travis Touchdown. If you need more proof that he’s a badass you clearly don’t understand what the term means. However, I suppose that since you’re here to read something we can go into a bit more detail on why Travis Touchdown is one of the biggest badasses gaming has ever had.

While we here at Destructoid have used the term badass to cover many different types of characters I’m not sure anyone has ever epitomized it more than Travis Touchdown. Jonathan Holmes has been looking deeper into the meaning of No More Heroes 2: Desperate Struggle all week, which is nice. But I’m here to talk about what we all really care about: ass, titties, sex, beam swords, sexual inuendo, cursing, blood, guts, violence, wrestling moves, motorcycles, awesome t-shirts, one-liners, nerdiness and dual wielding beam swords. You know, the things that make Tavis Touchdown the kind of guy that would probably carry around a wallet that says Badass Motherf**ker on it.

There’s so much that makes Travis a badass that I have in fact thrown in some random bullet points to the post between main paragraphs. Quick and easy to digest because, as Travis points out often, we gamers have short attention spans. 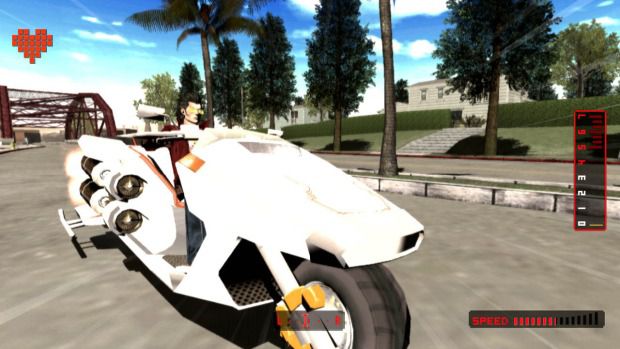 Where do you start with a character who was designed from the ground up to be a badass in every way we consider characters in videogames to be a badass? I say we start with the blatantly obvious: beam swords and chopping people in half. Unlike other characters who wield swords made out of energy, when Travis cuts into people shit gets real. A sword made of laser light stuff wouldn’t just dully thud on someone it would cut that bitch in half. Travis cuts bitches in half… and in quarters… and in thirds and pretty much any other way you can slice a human being. The point is that Travis kills people in really awesome ways.

He rides a super bike.

Take for instance the first kill in No More Heroes 2. He slices a guy’s head off so it spins up in the air and then lends perfectly back on his body. Perhaps though that is not badass enough for you. Maybe the fact that his first ranked kill in No More Heroes was just as awesome as he slices a man’s hands off and then proceeds to discuss his motivations with him before promptly slicing of his head. These are the kills he starts out the games with. I hate to ruin awesomeness for those who have never experienced it so I will only say that they just get better and better. The man knows how to wield a beam sword, which also happens to be a metaphor for his insanely large penis.

He’s not afraid to break the fourth wall. 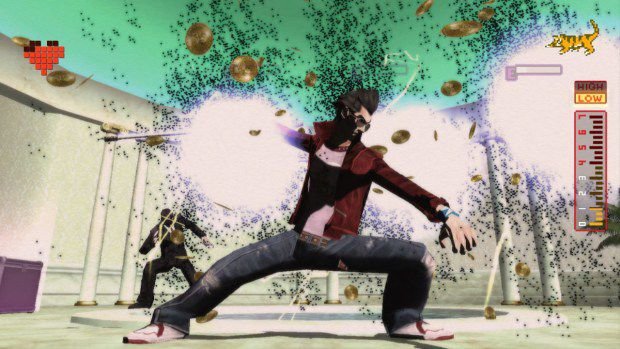 As if cutting assassins up with his laser sword wasn’t badass enough there is another reason why he’s a badass: he really shouldn’t be. Travis Touchdown is a nerd who sits in his living room watching wrestling, drooling over girls and wishing he could be an assassin. However, once he gets his beam sword in the mail (the most badass way to get a beam sword) he doesn’t just sit around continuing to wish he could be the greatest assassin ever, he goes and becomes the number one assassin of all time and in the progress gains a protege, learns the value of life, and gets revenge on his own sister for killing his mother and father. Most heroes in games barely scratch one of those life goals and end up simply saving the world. Travis, who starts the game with about as much motivation as an unconscious water buffalo, does all of this and then ends his first game in a never ending battle with his long lost brother.

Takashi Miike gives him one of his swords.

For other game heroes the long lost brother is a mid-game twist that ends in them eventually shaking hands or one killing the other. For Travis its a conclusion and instead of resolving shit like some girly man who talks about his feelings he decides to fight his brother to the death… FOR-EV-ER. Most people run from fights, some people actually fight in fights, some people win their fights, some people lose them. Only a badass enters into a fight the he knows will go on for all of eternity. 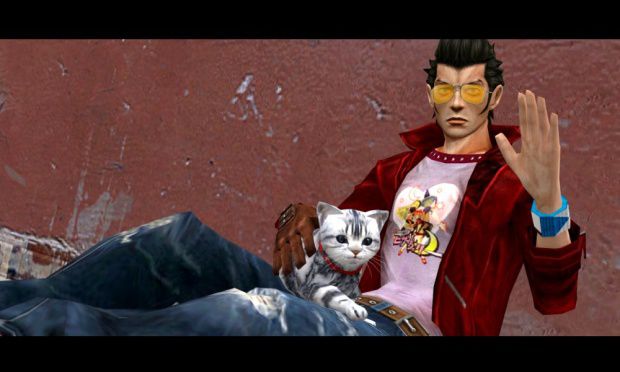 He owns a cat whose name is Jeane.

Now, you might point out the sequel and say that Travis didn’t fight his brother forever, he gave up and giving up is not badass. You couldn’t be more wrong and un-badass when you say that. Travis only stopped fighting because a very attractive woman told him too and that not only shows respect for women — which is badass — it also shows how smart he is because he eventually sleeps with that woman in a sexual romp that literally shakes the entire hotel he is sleeping in. Then after this he opens the door, looks around and proudly shouts the sexual position they just used: DOWNWARD FUCKING DOG! Does Sylvia, the woman he just had sex with, mind? No, because he just screwed her into unconsciousness and she’s passed out on the bed. Guess all that practice with the beam sword paid off.

He is considered an honorable warrior by those he fights. Dying by his hand is a victory in itself.

OK, so Travis walks the badass walk, but can he talk the badass talk? Of course. The man is a master of the closing one-liner. Examples: “I’m sorry, I don’t keep a death diary.” “Some people fuck at funerals, I cut off heads”; “Unleash your hate! Your anger! Everything! I’ll take it all and fucking kill you with it!”; “If challenge had a taste, you’d be quite delicious”; ” FUCK YOU!” That last one is a classic, but he delivers it with verve.

He’s also a master of the meaningful speech. See, not only does Travis say shallow things after he kills people, but he then follows it up with a speech about how you can’t throw away life or honoring great opponents. Most games require two heroes to do this; the lead character who gives the heroic speeches and the jerk buddy who delivers the one-liners. Travis does it all without skipping a beat. He’s heroic enough to give the big speeches, but just enough of an ass to mock someone who he has just killed. 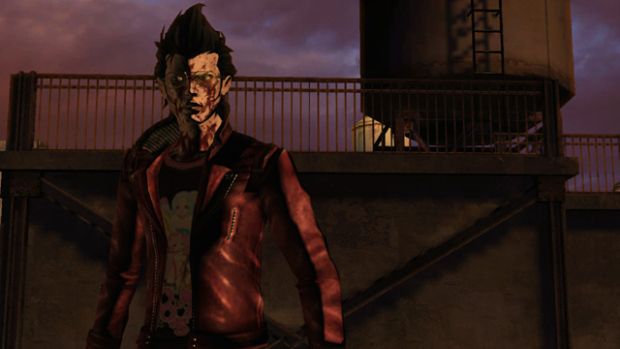 He has a faux-hawk thing going on, but it’s cool on him.

Do you know what is also badass? Looking good. Travis has more articles of clothing (at least in t-shirt form) than the Wii has mini-game collections. He’s got t-shirts from famous artists, famous bands, famous designers and other famous things you can put on t-shirts. Coupled with a shnazzy red jacket, a pair of rocking jeans and shades to die for he’s one of the best dressed gaming characters ever. Part of that is because he is at least remotely real. He doesn’t have needless belts dangling down from odd places. He isn’t missing some article of clothing most people wear. He isn’t in more armor than would actually let a human being move. No, Travis wears actual clothes that are awesome, not fake-ass fantasy clothing that looks awesome, but is actually completely impractical.

He cusses like a sailor… a sailor who can only say fuck.

This brings me back to the fact that Travis really shouldn’t be a badass. He’s an everyman. He’s a regular guy. It’s not like he’s some super solider carrying a big gun or a stealthy assassin. No, he’s just some dude who wants to be the best at the game he’s playing. In short, and as I’ve already discussed, he is us, the gamer. And if you don’t think anything else I’ve said about Travis is badass, you have to at least agree that having a gaming hero that represents the gamer himself is one of the most badass things in gaming history.