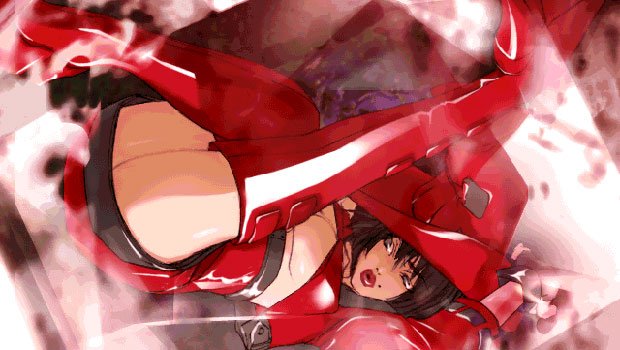 Time once more for the Badass of the Month Club, wherein the staff highlights a character or industry figure of noteworthy badassery.

Sexy and deadly are always a good combination. We’ve seen it for years with characters like Morrigan and Chun-li (before the thunder thighs got out of control), but no one captured it quite like I-No, who induced many a people into chucking their controllers in frustration when she made her way onto the screen in Guilty Gear XX.

She’s certainly a badass character to play against, for anyone who’s tried. She’ll kick your ass six ways from Sunday with her rockin’ tunes, skimpy outfit, and a hat that would put Harry Potter‘s sorting hat to shame. So, let’s get into why this black-haired bombshell earned herself a place in our Badass of the Month Club after the jump.

Apparent throughout the story of Guilty Gear XX, I-No appears in each character’s story, misdirecting them and orchestrating their meetings. I-No is the mastermind behind most of the fighting that goes on throughout the game, acting in accordance with the wishes of The Man — the mysterious figure of Guilty Gear.

Just like one of my favorite villians, Master Asia, I-No isn’t simply a puppet — instead, she seems to be working for personal gain, setting herself up on top of the world as That Man’s best assistant. And so, when it comes time to confront I-No, you’re in for one hell of a fight.

When you get into combat with her, she is a total nightmare to fight against. Up until this point, you’re used to a certain level of combat, fighting against the likes of Sol, Ky, and the others, but I-No takes it to another level with attacks like her bullet hell mode where, if you’re not prepared for it, will wreck you. She’s a deadly combination of power and speed, something that’s hard to beat.

While just about everyone fights with some sort of ridiculous weapon in Guilty Gear, I-No has music on her side. Wielding her guitar and her magical hat, she launches discordant harmonies as attacks that combo into one another so fluidly, that her opponent has lost half their health bar in the blink of an eye.

One rule of women in storytelling is “evil is sexy.” Morrigan from Darkstalkers is a great example, who is so overtly sexualized that she practically offers sex to any innocent boy that happens to cross her path. Throughout anime, manga, and games, demons are often large-breasted, over-exposed, and jumping at the chance to exact their carnal desires on you. And that’s one of the classic portrayals of the “evil is sexy” rule. But I-No has a bit more class, and that may be in part because of her being a mastermind as opposed to just a demon. The sexuality is there, but it’s hanging in the tone of her voice, the way she says things, and her naked back that you see when she takes her top off after a victory.

As an aside, something that surprised me in reading about I-No is that her voice actress is the legendary Kikuko Inoue. It’s surprising because she’s normally playing characters in shows like Clannad, Onegai Teacher, and Ah My Goddess — I-No and Guilty Gear are a far cry from that sort of “17-year-old” persona that she’s built up for herself.

I-No is someone who I continue to dread fighting against, even after so many years of playing Guilty Gear. I know I’m in for a challenge when fighting against her. I know that I need to stay on my toes, lest I get my ass kicked. But at least I know that if she does hand me a solid beatdown, I’ll get a shot of that great figure of hers.