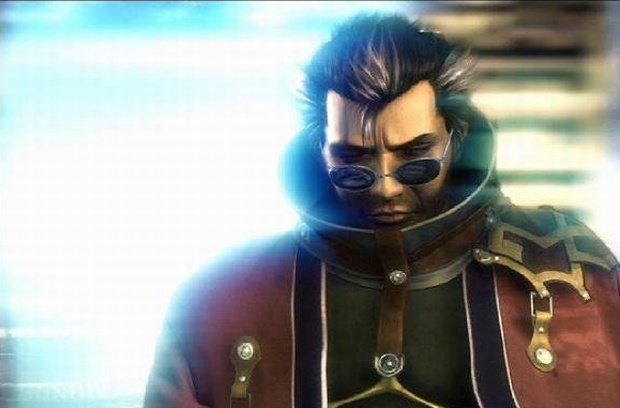 Time to rub our hands together and produce the magic that is Badass of the Month Club! Remember, this feature is all about industry figures of game characters that blow it out of the water with their levels of awesome. Common sense warning, though — spoilers for Final Fantasy X follow.

I’ll admit it, when I saw who Anthony had chosen to profile as last month’s chosen badass, I was insanely jealous for not having come up with the idea myself. Lost Odyssey‘s Jansen Friedh was an incredibly memorable character, and while not quite a traditional badass, you can’t say a guy that waltzes away at the end with the hand of the finest lass in town isn’t kind of a hero.

On the other hand, there is something about a very traditional type of badass that stirs hearts and brings feelings of admiration rushing to the surface. Sometimes a man is so manly, in fact, that he simply radiates toughness, able to weather even the most powerful storm and take any amount of crap life throws at him, no matter how much.

Auron is that man.

We have to begin somewhere, so let’s start with the way that Auron deals with Final Fantasy X’s famously whiny protagonist, Tidus.

From the first moment you meet the character, you can tell that Auron is a man who does not waste words. Ever. Every note of every sentence he speaks resonates with conviction and surety, and he handles conflict like an old pro. It also helps that he looks cool. After all, Tidus looks like a well-scrubbed weakling with a penchant for overly fancy clothes at the beginning of Final Fantasy X, but Auron? Auron rocks a bitchin collar that covers up more than half of his face, black hair with white streaks, a shirt that shows off one finely muscled arm, and most amazing of all, sunglasses all the time. But he still doesn’t look like a douche. Now that’s talent.

It doesn’t take a rocket scientist to observe that Auron is a guy that’s had some experiences in his time, some which he’s not so forthcoming about at the start of the game. Of course, the air of mystery only adds to his devastating badassery, so I can’t really complain here. Later on you’ll find out that the legendary guardian was mortally wounded in a fight with Yunalesca and asked Kimahri to move Yuna to the town of Besaid and ensure she has a happy childhood. Afterwards, he dies and becomes what’s called an “unsent”. Let’s repeat that for emphasis: when you meet the guy for the first time, he’s technically already dead, but is kicking ass and taking names like nobody’s business. Another notch in the badass belt attained.

Auron bears his burden silently, as you’d expect a man of his station to. He never pushes, he never uses force unless it’s absolutely necessary, and he stands as a pillar of support alongside Yuna on her difficult and often painful journey. You’ve never seen a man bear such a burden as if it was lighter than a feather, but Auron accomplishes it. Of course, you don’t know the half of Auron’s story for the majority of the game, and that lends greatly to your curiousity about him. I’ve heard many a time that Auron kept people playing who weren’t that into the game otherwise, and while I think the game stands on its own as a strong experience, I can see how Auron could keep you interested. Fascinated, even.

After long standing as the pillar of strength that your party leans on throughout the game, Auron finally comes to the point where it is time for him to move on. It’s not very often that I am able to say that I feel true joy over watching a character die, but when it comes time for Yuna to send Auron, I was simultaneously sad to see him go and deeply happy to know he would finally be able to find peace. Few characters deserve it as much as he did, and by letting him die in the game, Square smartly engraved him even more deeply on the collective gamer memory.

In the end, Auron’s strength as a character was clearly outlined more by what he did not do rather than what he did. If we had known any more about him from the very beginning, we wouldn’t have been as motivated to follow his path and find out what laid beneath his steely interior, but in his very first moments saving Tidus’ ass and murmuring back and forth with the forces of universe, you know there’s a lot beneath the surface to discover. We’re usually intended to relate to the plucky young hero, but sometimes another player can steal the show, unintentionally or not. I think it’s safe to say the show belonged to Auron on more than one occasion, and we were more than happy to see it go down that way.