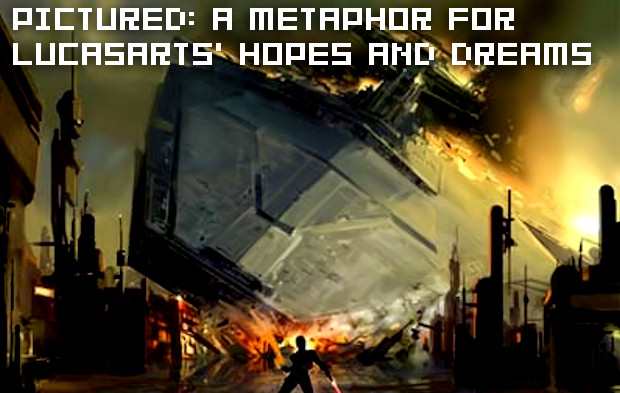 Nobody likes to get a bad review, not least the team who worked on last year’s Star Wars hopeful, The Force Unleashed. It’s clear that the team worked incredibly hard on making the game look impressive with believable Force powers. Unfortunately, they forgot about the gameplay part, and the team was pretty let down when some game reviewers felt that was an important oversight.

“I’d get these reviews, and I’d be like, “Aw, these guys are irresponsible. How could they say this?” explains LucasArts’ Haden Blackman. “… but part of it, as you said, is that I’m watching this team that has worked so hard on this game for two, almost three years. And they’re reading this stuff … all the air gets sucked out of the room. People were miserable for the whole day. It’s hard to keep them focused. And we were working on DLC already at this point, on Jedi Temple, so I’d say, You guys need to keep focused. Come on, it’s just one review.”

The closer you get to the industry and the people who work in it, it’s harder to write a bad review without thinking about the people you’re potentially upsetting. Unfortunately, a bad game is a bad game and a reviewer needs to say what they think without worrying that a developer is going to get the violins out. So yes, bad news for LucasArts, but if a game isn’t very good, it isn’t very good. Limited sympathy is in order.