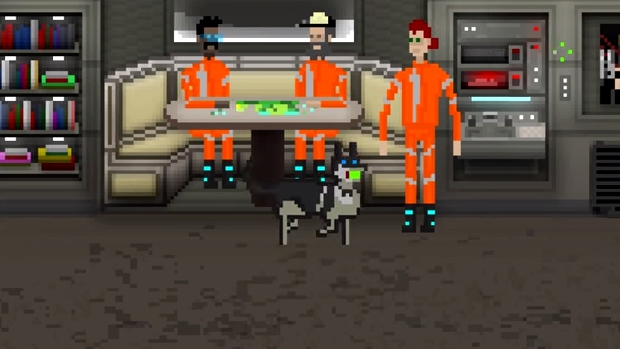 This is why you name a dog Fluffy or Fido or Spot. When you go and give it a name like Fenrir, after a mythological wolf monster, it gets taken over by an alien being and wants nothing more than to devour your flesh and bones. Bad dog! No treats for you today.

The kicker with Outpost 13 is that players control the dog/alien, in an attempt to gain the human crew members’ trust, separate them from one another, and systematically murder each of them. In the point-and-click adventure, stealth and planning play roles, because if Fenrir is found out as the monstrous menace that he is, it spells a quick trip to the barrel of a flamethrower or two.

Outpost 13 has already passed through Steam’s Greenlight process (coincidentally, in 13 days), and is currently seeking a small amount of funding on Kickstarter. Cat lovers who are interested may want to get in sooner than later, as backers gain access to Dr. Meow Meow Jones. Where Fenrir must be controlled by the evil alien Tantalus in order to perform its dastardly deeds, Dr. Meow Meow Jones is just a regular cat.

(The previous sentence is a lie, but let’s be honest, it wouldn’t be that far fetched.)