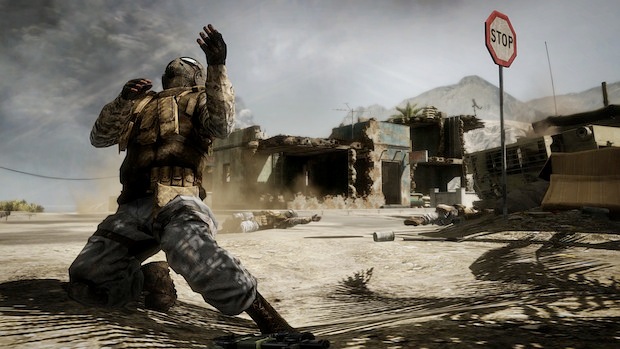 It’s not hard to become numb while competing in an online shooter. As these components continue to become beefier and more complex, the impact an individual has in the outcome of a match shrinks. But not every upcoming online setup is following this trend: Digital Illusions CE is blending massive team strategy with individual, hard-nosed impact in Battlefield: Bad Company 2.

I’ll give you an example. In a single match of BC2 last evening, I sabotaged two Russian beacons while keeping my feats-in-progress going with a hot barrel and a magazine packed with lead death-dealers. I butchered ten combatants, helped to defend a position from incoming armor, and jolted around six fallen comrades with a vicious blast of electrical current — all in a span of nine or so minutes.

I didn’t need to kill 20 people in a row or compete for countless hours for the privilege of experiencing success. I just needed to load the BC2‘s closed beta and hop into a match.

The BC2 beta showcases one map, Arica Harbor. It’s a Middle Eastern-themed map featuring a sea of light-colored sand, twisted and broken set pieces, and tons of sun. Breathtaking at first glance, the brightness reminds that not all shooters require murk and gloom to be special. Likewise, the sharp contrasts between the sand, the demolished vehicles, and the various set pieces provide a platform for the stunning visuals. If BC2’s full online component keeps to this same bar, I see it becoming one of the best-looking multiplayer games of this generation. No doubt.

Arica Harbor hides its scale with a bit of cleverness. It’s the people competing in the beta’s single game mode, Rush, who decide the size of the colorful map. The mode pits two 12-person teams against each other — the Attackers and the Defenders. The Attackers’ immediate goal is annihilate two marked beacons with explosives, while the other side attempts to defend this. If the Attackers succeed, two more beacons appear further down the map, forcing all to rush the new positions. This can happen a total of three times until the map uncoils to its crescendo: the harbor itself.

I’ve experienced some of the nastiest, most intense slugfests in the game at the harbor. DICE put both targets inside a lone building, with both sides spawning outside of the structure. That’s conducive to plenty of brawling outside of the objectives, which are easy to defend, yet playfully exposed to outside influences. This tends to create some major satisfaction after the objective is completed — even for the Defenders. If the aggressors can’t hit both targets within 100 collective spawns, the game ends.

Guns, Tanks, and Gadgets, oh my!

While there’s fun to be had and strategic opportunities with the inclusion of vehicles, something fascinating happens as objectives are destroyed and the map expands: the game starts reducing vehicle spawns, forcing people to forgo them and fight on the ground with guns.

The shift in warfare puts the focus on the tight gunplay. BC2’s mechanics remind me of Infinity Ward’s Call of Duty: Modern Warfare. The guns are lifelike — heavy, and accurate to a point. The emphasis is thus on stop-and-pop. You can’t hold down the trigger and expect magic to happen. Executing a kill requires a bit of patience and skill. In contrast to this is the sniper rifle, which seems to walk on the Halo side with its accuracy while running.

Similar to the gunplay, the class and leveling systems borrow a bit from the MW model, allowing for snappier (than usual) progression regardless of success and skill.

Four classes are represented in the beta: Medic, Engineer, Assault, and Recon. Each one carries its own specific equipment. For example, Medics have bullet-heavy LMGs and defibrillators to revive fallen opponents. Assaults carry long-range rifles with grenade launcher attachments, and so on.

Being a class man reaps rewards in terms of specific and universal progression. An well-performing Medic earns guns as he kills, and specific tech perks as he deploys health packs and revives others. In turn, this makes Medics more valuable to any team.

And that’s not quite all there is to earn, of course — a quick look at the “Weapons and Gadgets” screen reveals tons of medals, universal unlockables based on specific levels, special dog tags and even insignias.

The progression is simple, yet effective. Medics who can defend (or attack) with success while scanning the field for the fallen are valuable to Squads. Plus, Medics who can do these sorts of things ramp up the opportunity for collective success because of their reviving ability in Rush.

I think the BC2 beta boils down to meaningful experiences. The game doesn’t force you to become a cog in the machine, shackled to a class or arbitrary orders by an overarching commander who needs to see the sun every now and then. Rather, it allows players to express themselves to some degree and experience success on their own terms.

The particular match I mentioned earlier is a great example. While on my way to an objective, I jolted teammates and blasted several enemies before placing an explosive brick on the marked target. That’s impact, a meaningful experience within the online component. I wasn’t sitting in a corner eating kills or relying on others to do all the dirty work. I was able to do my thing at my own pace and directly affecting the outcome of the match.

The marketing talks a lot about BC2 being “dynamic.” I agree — it has a dynamic edge, which in turn provides fodder for tons of individual and unique stories and shared experiences within. The squad-based tactical spawns and the hardcore destruction engine are certainly a major part of this idea, providing unique chaos in every match.

Regardless of how often I play Arica Harbor, each match is a different one — parts of the environment are blasted away, forcing me to take different routes and seek shelter in other places, and my squad members do just the same, forcing me to spawn in different locales. In short, it’s all fresh in Arica Harbor to some degree.

I look forward to seeing the full online component in BC2. This Arica Harbor-based beta was a fascinating one, allowing me to see the little touches that should make this game pop in March. That is to say, if things remain the same from the beta.

And if the larger things go unchanged, and this is a real, accurate reflection of what to expect with the full game, then Battlefield fans won’t walk away from BC2 disappointed: its beautiful look and spectacular mechanics will keep people playing hungrily, begging for more between each match. We’re ready to be consumed all over again.