For it being the first time it showed Super Mario Galaxy 2 to the press, Nintendo brought a surprising amount of the game to the company’s media summit in San Francisco this week. Nearly 10 levels varying in style and difficulty were playable; they showed off a number of new items, features, and platforming challenges.

Make no mistake — despite the fact that Nintendo claims Galaxy 2 is a full-on sequel to the 2007 Wii title, the game most certainly has the same vibe. It wouldn’t be out of the realm of possibility for one to mistake it for the original after a quick, passing glance. And even after getting my hands on the title, it’s obvious that the basic mechanics have remained true to the original, including gravity-defying spherical worlds and platforming.

Galaxy 2‘s greatest strengths seem to lie in its new locales, power-ups, and — perhaps most important — the return of Mario’s trusty dinosaur pal, Yoshi. I played a number of the new levels, with a focus on Yoshi, and came away impressed (and excited) by Nintendo’s latest Mario offering.

Hit the jump for Yoshi-on details of Super Mario Galaxy 2.

In order to get my Yoshi on as quickly as possible, a Nintendo representative suggested we check out a level called “High Tree Falls.” In this stage, Mario uses Yoshi — found inside of eggs sitting in small nests scattered throughout the worlds — to climb the winding trail on tree trunks and ascend steep inclines that required a little extra boost from a fruit power-up.

This power-up in question was the “Dash Pepper,” a spicy fruit that sends Yoshi into a hot-steppin’ tizzy. Once eaten, Yoshi “overheats.” His entire little dinosaur body turns red, and his wiggly dinosaur legs go into overdrive. This power-up also gives Yoshi a super speed dash ability, leaving a trail of smoke in his dust as he uses the extra step to navigate steep hills previously unclimbable.

I had to navigate the over-spiced Yoshi (gone wild from the taste of the hot pepper) up a series of twisted paths, with any obstacle I hit sending me tumbling down to my start. The goal here is to successfully navigate the path to another pepper (and another, and then another), continuing on until the final goal (a star, as in the previous game) is reached. 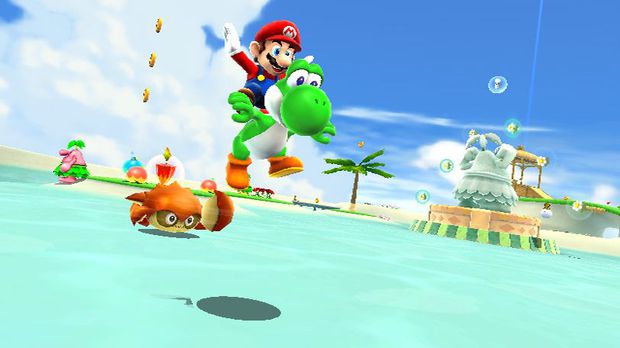 In another level, you’ll make Yoshi eat another new type of fruit, the “Blimp Fruit.” This does exactly what you’d expect, expanding Yoshi’s belly with helium-like air that sends him floating as if he were a hot air balloon. The only control you have over Yoshi is left and right, as the “Blimp Fruit” will take you up, up, up. It’s timed, so if you don’t navigate the level properly using the fruit, you’ll deflate and send Yoshi (and Mario) plummeting towards the ground.

A few notes about controlling Yoshi, as things are both familiar and new in Galaxy 2: Yoshi’s moves should feel familiar to Mario veterans. They include the butt stomp and the fluttering kick that will give your jumps a little extra air (by simply holding the jump button for a little longer).

It’s how Yoshi’s tongue is being used that’s different. Instead of simply directing Yoshi toward a fruit or item and pressing a button, you’ll have to hover the on-screen reticle to aim at the target and then press the “B” button on the Wii Remote to extend his tongue. A red circle lets you know you’re good to go, and this applies to not only fruit, but also to an enemy or object (like a lever, for instance). 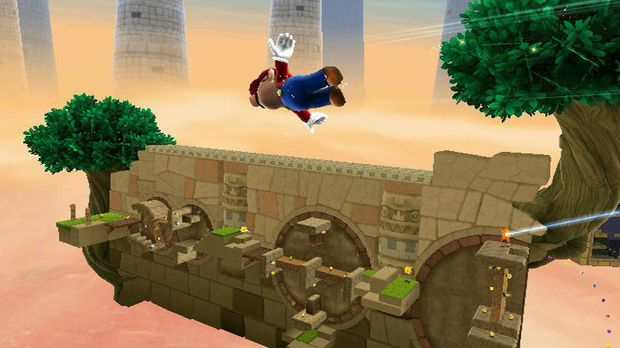 It takes a bit of getting used to. As a Yoshi veteran, I wasn’t cognizant of where my reticle was, especially in the heat of the action. But after a few levels (and failures), it became second nature, and I was using my Yoshi’s tongue like a pro. (That sounded naughtier than I had intended; please believe me when I say that.) This ability can be used in some clever ways as well. In one section, I had used the tongue to capture and hold some Bullet Bills in Yoshi’s mouth. I then had to fire them off to shatter a glass sphere that had previously blocked my path.

While an easy focus, Yoshi’s not the only new ally or power-up Nintendo was showing off. In some areas, you’ll encounter a small drill item, which, when held, allows you to tunnel through certain areas of the ground, right through to the other side of the planet. On the planets I had seen, some spots on the ground were marked with a small crater, which usually indicated that drilling through would lead to a previously unobtainable platform or item. One boss, Digga Leg, even required the use of the drill. It was necessary to lure the stomping mechanical beast to a certain point on a small “planet,” after which I used the drill to dig through and nail an exposed belly area. 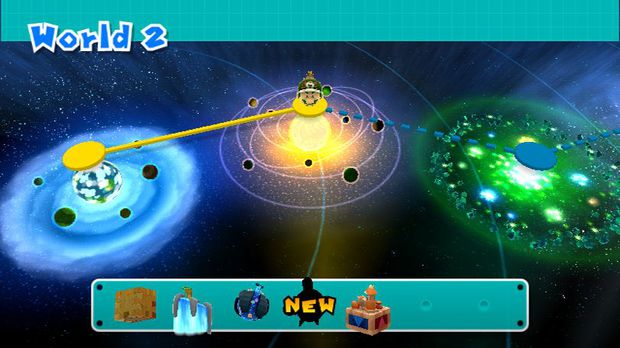 When Nintendo revealed Super Mario Galaxy 2 at E3, I had mixed emotions. At first, I was disappointed that Nintendo had decided to revisit the Galaxy formula so soon, presenting what appeared to be an expansion of the original. Even after playing it, I’m not entirely convinced I was playing a game so drastically different that it warrants a “2,” as much as it could be called More Super Mario Galaxies.

But let’s be realistic — for anyone who enjoyed the original, More Super Mario Galaxies isn’t the worst thing Nintendo could deliver to its fans. And despite feeling familiar, it’s obvious there are enough new challenges and clever tricks that should keep fans happy when Super Mario Galaxy 2 ships on May 23. I certainly can’t wait to explore more galaxies, especially with a familiar green dino friend by my side.