Sorry, every other track

This Friday, the wonderful Wii U title Mario Kart 8 is making the jump to the Nintendo Switch with Mario Kart 8 Deluxe. The Deluxe pack will feature every track from the original game that more than 8 million people enjoyed as well as all of the DLC cups. That includes Baby Park, my favorite Mario Kart track ever.

At first glance, it doesn’t look like much. In fact, it almost looks it should be a tutorial track to teach you the basics of the game. But once the green light flashes, its one-dimensional veneer melts away as you’re forced to survive eight laps of absolute hell. Each lap takes about 10 seconds, but in Double Dash, those seconds could be filled with you dodging giant Bowser shells, huge bananas, waves of fireballs and the rest of the special items that, for some reason, are exclusive to Double Dash.

That is what makes this track stand out. Other courses in the game are quite big, wide and occasionally too long, so it’s easy to avoid these massive obstacles. But here, in the baby-themed thunder dome, you’re lucky to make it five laps without seeing your kart tumble over itself.  And when somebody lets loose a blue shell? Fuggedaboutit.

Baby Park doesn’t feel like a traditional race, it feels like the madcap chaos of Mario Kart’s battle mode has been isolated and concentrated into a deceptively cute-looking traditional track. For that, it’s the best of the bunch and I challenge anyone to prove me wrong.

I must admit part of my decision-making process involves the fact that I played Mario Kart 64 with friends more than any other entry to date, but Koopa Beach is still one of the best low-tech tracks in any racing game. It has it all, but it’s done so well that it never feels too gimmicky — crab hazards, one shortcut that’s satisfying to pull off even 100 attempts later, and a special juiced-up item box.

It was so good it came back in Mario Kart 7, and hopefully many more future iterations to come.

Sure, Koopa Troopa Beach has that slick built-in shortcut up the ramp and through the waterfall, but no Mario Kart shortcut beats the probably-not-intended one on Mario Kart 64‘s Wario Stadium. It cuts off about one-third of the course, so being able to hit it consistently meant guaranteed victory against the CPU, and it meant a lot of jockeying for position among experienced players.

What I was never able to reliably accomplish is the double shortcut on Wario Stadium. Jumping over the first wall was easy enough, but jumping right back without getting stuck and needing Lakitu to pick me up was rough. Those who could do that put up world record times, with full three-lap races lasting less time than a jaunt around Baby Park.

Even if we ignore the awesome shortcuts in Wario Stadium, there are other cool features to take advantage of. One of my favorite things to do was to get a lightning bolt, keep an eye on where the leader was, then zap him right as he’s going over the big jump. It’s one of the most devastating uses of the lightning, not only slowing somebody down and making him squashable but dropping him onto the course below the jump is a huge setback.

Given the track’s name, I have to imagine all this deviousness is perfectly in the spirit of Wario. 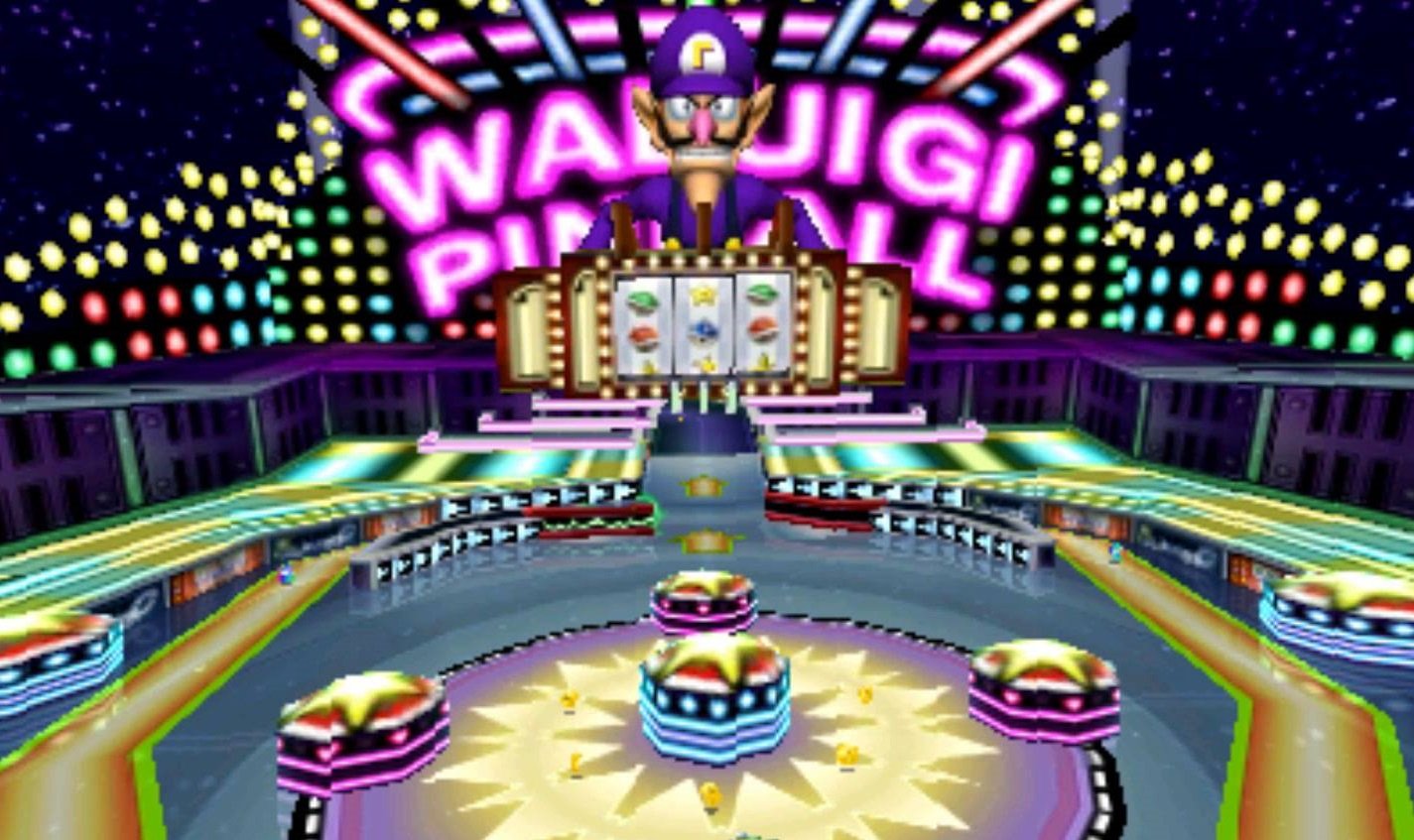 Baby Park is definitely awesome, but the central gimmick is just that it is tiny. You only turn right, unless you’ve really screwed up, so it can become boring after a bit. It worked wonders for Battle Mode in Double Dash (and somehow didn’t show up as Battle course in Mario Kart 8), but it isn’t the best race track. No, I think that distinction belongs to Waluigi Pinball.

Mario Kart DS is one of my favorites in the whole series (right behind 8 which would be dramatically higher if it had a proper Battle Mode) and one of those reasons was the wild course selection. Luigi’s Mansion, Airship Fortress, Tick Tock Clock, Peach Gardens; they all were just awesome. Everything centered around one theme and exploited that theme with specific course hazards that just felt fun.

Then the glory that is Waluigi Pinball gets introduced to the player and all bets are off. It isn’t totally original to have your drivers be shrunken in size to fit a specific theme, but becoming a pinball in a giant machine fashioned after possibly the worst Mario character ever was amazing. It almost makes up for how pointless Waluigi is…almost.

I love the center section where you can ping around on the bumpers or how the intro launch onto the track feels like sending a pinball out into the machine. It also has a catchy track and that wicked turn section that requires perfect drifting. Hell, it made a return in Mario Kart 7 (even if that game sucks), so that should speak to the quality of its design. 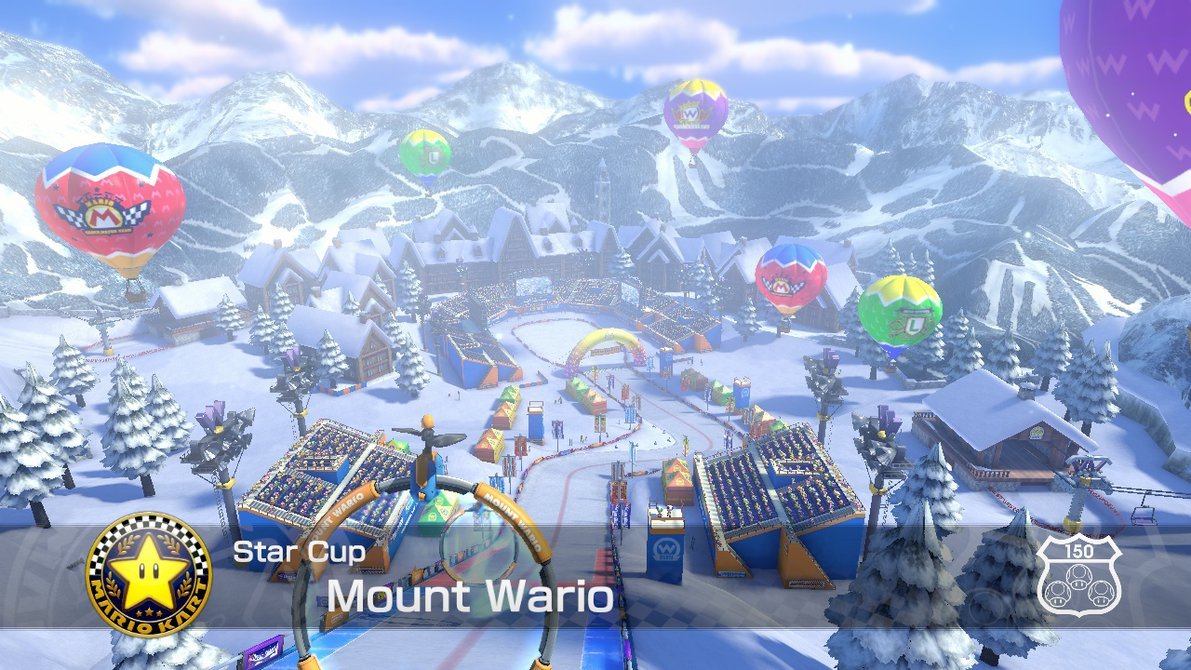 While I’ve always enjoyed playing Mario Kart over at a friend’s house, it wasn’t until Mario Kart 8 that I finally brought the series into my own home. With the incredible visuals, neat anti-gravity elements and some of the best tracks in the series, it certainly was a great time to jump in.

The Star Cup hosts three of my favorite tracks in the game (as well as my least favorite: fuck Dolphin Shoals). Sunshine Airport is a fairly simple track with a cool setting, and Electrodrome is one of the most visually interesting tracks in the game. However, my absolute favorite track in the series comes by way of Mount Wario.

Mount Wario stands out to me because it is one of the very few tracks in the series that doesn’t work with laps. Instead, it features a set starting and end point, from the top of the mountain straight to the bottom. As a result of having one big stretch as the course, Mount Wario manages to cram in a lot more variety than any of the other courses in the series. You start in an airplane flying above the mountain, you the slide your way down into a cave, you pass through a facility for a dam of some kind, go through the forest, and follow a skiing track complete with slaloms and a huge ramp. All of this is accompanied by the best music in the game, which subtly changes according to how far along you are in the race.

When in the distance you can make out the finish line and the fans who have been waiting for the racers all this time, you really feel like you’ve just participated in the biggest event of the Mushroom Kingdom.

I think I misunderstood the question. Sorry. 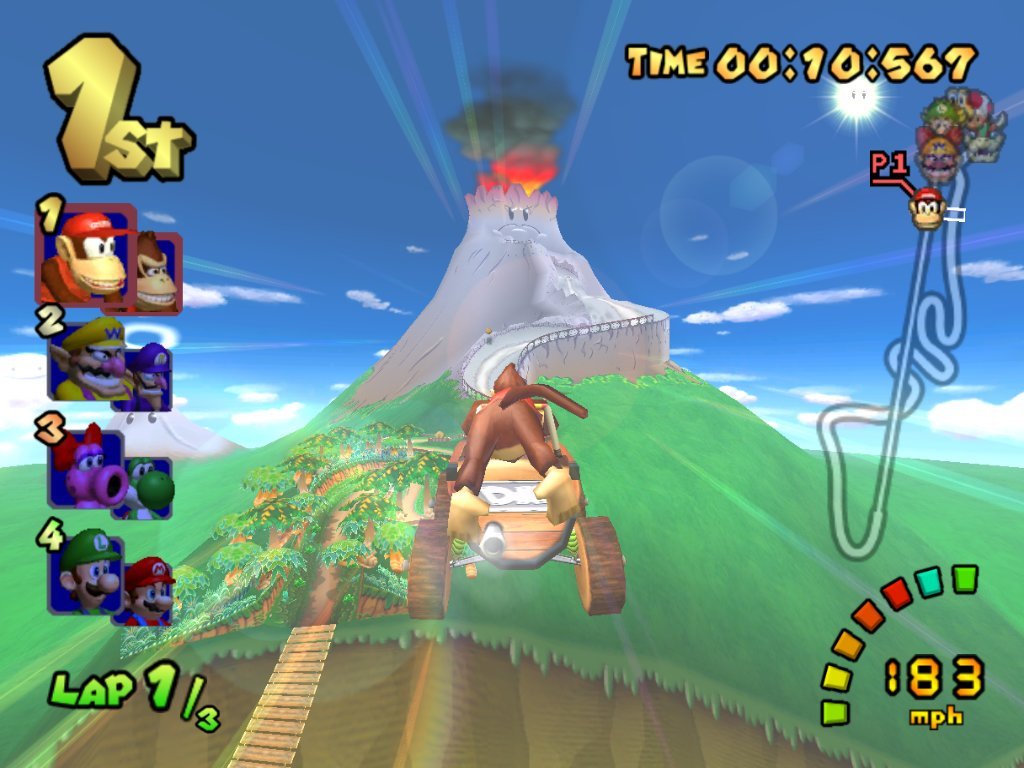 Mount Wario is definitely a strong pick from my Dutch friend. Is there a greater expression of driving skill than by demonstrating it on a mountain? But we’d be remiss if we didn’t mention another great, mountainous driving track. While Mount Wario provides the thrill of a complete, one-way race on a downhill jam, Double Dash‘s DK Mountain makes up for the singular, unique track by adding ballistic acceleration to the mix.

Why pad the track with a boring uphill section? Everyone knows the best part to driving on a mountain is jamming it downhill. So DK Mountain fixes this by making racers jump into one of Donkey Kong’s patented barrel cannons and shooting you all the way to the top of one angry looking mountain. From its peak, you proceed to barrel down, braving falling boulders, sudden cliffs, and steep inclines that’ll challenge your ability to simply stay in a straight line as your wheels leave the ground often. Throw in the mayhem of Double Dash‘s character unique items like giant Bowser shells and chain chomps and you have yourself a barrel of good times. Personally, my favorite thing to do is snipe someone with a shell right as they hit the barrel cannon. Yes, they’ll launch forward anyways without much trouble, but I like to imagine some poor schmuck tumbling into a cannon and continuing to tumble uncontrollably as they fly out of the cannon.

Boy, those are all weird ways of saying “Baby Park is great. We agree with CJ. Let’s give him a medal for being so right!” At least, that’s how I read everybody else’s entry.