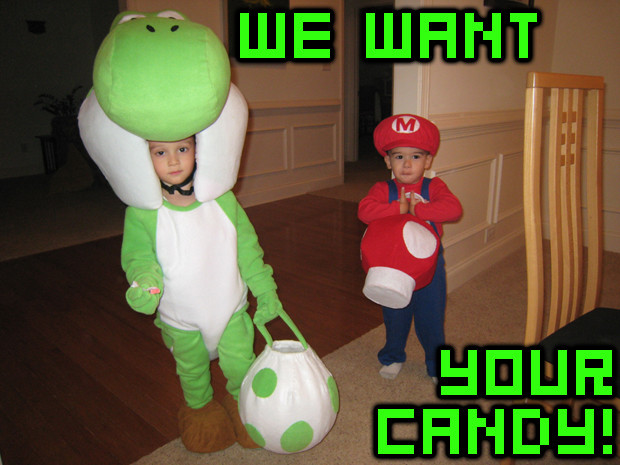 [Editor’s note: craineum is at it again with his Halloween costumes. Last year, he made his kids Mega Man and Kid Icarus outfits. This year, his kids are dressing up as Yoshi and Mario. Sweet! — CTZ]

I really like doing themed costumes for my family. Last year we went as members of the Captain N: The Game Master television show. While that was fun and very successful, I wanted to let my oldest pick who he wanted to be this year.

He started off saying that he wanted to dress up as Mega Man again. I talked with him about how much fun we had building the Mega Man costume, trying it on and seeing it become this really cool suit. Then I explained to him we could build something new so we get to have all that fun over again. He was sold.

We did some research trying to work in the themed idea. We got it down to two options: Yoshi or Astroboy. It really wasn’t much of a competition, Yoshi was his choice. I was hoping that he would choose Astroboy since it would be pretty similar to the Mega Man costume, but in hindsight I am glad he didn’t.

I wanted to dress up as something, but didn’t think I would have the time to do Bowser, which seemed the obvious choice. I also didn’t want to take away from the kids. So this year I will go without.

With the costumes decided I went to work on design. Baby Mario would be pretty easy, so my main concern was Yoshi. I wanted to build Yoshi to scale, ie Yoshi’s head is about the same size as his body. My 4-year-old is the perfect size and strength to be able to pull this off. I hadn’t seen a costume like this out there, and thought it would be really fun to do.

From there I started working. I failed hard with the first attempted Yoshi head. But my sons words of wisdom kept me focused. We finished up everything just in time and you can check out how both costumes were made after the break.

The Hat
How to Build

I gave the idea of using the hat as a base and adding some filler.

The Shirt & Overalls
How to Build

Just a simple long sleeve shirt made of red cotton fabric. Its amazing how much stuff we have around the house. I kid you not, we did not have to purchase those big yellow buttons for this build. The rest is made with blue cotton fabric. Could have used regular blue jean overalls, but this looks more toony.

Super Mushroom Basket
How to Build

I wish I would have made it a little more interesting of a shape, but still love how it came out. Love how easy and fun this part of the project was.

The cost and build time do not include the first failed attempt, or all the things I did that were part of the learning experience.

The Head
How to Build

This took the longest and was the most complicated for both me and my mother-in-law who did all the fabric patterns and sewing. My time was about 5 hours of carving, gluing, and hollowing out. Also making the mounting and chin strap.

The Suit
How to Build

This was all my mother-in-law with a little direction from me.

The Shoes
How to Build

I spent probably less than an hour carving these shoes.

Yoshi Egg Basket
How to Build

Again, these things were the easiest/cheapest part of the costumes, and so very very effective.

Pictures of them being worn:

More in the gallery, and more in the directions on how to build.