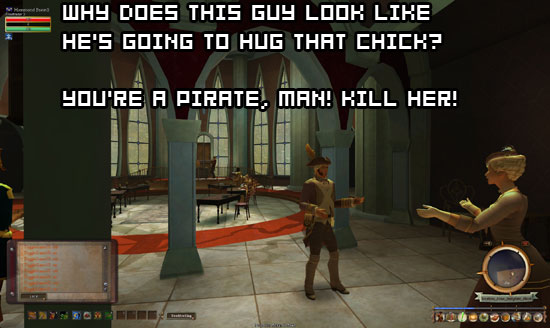 Argh! Before ya’ read this, ma’ matey, be sure yer listenin’ ta Tom Waits’ “Hoist That Rag” to really get yerself inta tha mood. Eye patch is optional. Aye!

Sony Online Entertainment and Flying Lab Software have announced today that Pirates of the Burning Sea, the anti-landlubber PC MMO, will launch worldwide on January 22, 2008.

On October 23, wannabe swashbucklers can pre-order the title, which will get them an invitation to the “Pre-Boarding Party,” which lets them pillate and plunder 15 days prior to the game’s launch. During these 15 days, players and their real-life parrots can hole themselves up in their basements and level up to 20, and can keep their character after launch (with the purchase of the game and paid montly subscription).

Players will also receive a “captain’s best friend,” a digital blue and yellow parrot; a weapon best-suited for their character’s fighting style; and an original soundtrack CD with an hours worth of pirate-themed music (not a re-mastered version of Tom Wait’s Rain Dogs, although that would be great).

“We are eagerly anticipating the day we can raise the anchor and set sail with Pirates of the Burning Sea. Our team’s hard work and dedication, and that of our partners at SOE’s Platform Publishing group, is going to result in a fantastic gameplay experience for PC gamers,” said Russell Williams, CEO, Flying Lab Software.  “We are looking forward to bringing this game to fruition, and appreciate the support from our dedicated community in helping us to develop a top-notch game.”

As a captain in Pirates of the Burning Sea, you can choose among the French, Spanish, English, or Pirate nations, playing a naval officer, a freetrader, a privateer, or a pirate as you like. Action–filled ship battles take place at sea, where players can destroy or board and seize their competitors’ ship. On land, a world of swashbuckling adventure awaits full of sword-swinging action. The unique player-driven economy means players can be a captain of industry too, running mines, lumber mills, shipyards and other large-scale operations to produce the tons of goods needed to supply every player in the game with what they need. Through the player-generated content system, players can create their own sail and flag designs to display in game and even model their own ships.

“The vast amount of player-created content and the intense strategy required in Pirates of the Burning Sea sets it apart from any other MMO on the market,” said D Tim Granich, Sr. Global Brand Manager, Sony Online Entertainment. “Gamers will be donning their captain’s gear and eagerly awaiting their next battle on land or sea.”

The game takes place in the New World circa 1720, a dramatic time of conflict and riches that features action for every play style, from epic ship combat, to piracy, to building economic empires or sword-swinging adventure. With more than one thousand missions per nation, dozens of ports to explore, and the entire Caribbean as their domain, players will find an online experience like no other.

Pre-orders are scheduled to begin on Tuesday, October 23rd. Players that pre-order will receive an invitation to the “Pre-Boarding Party” giving them access to the live game 15 days prior to launch. During this time, players can level up to 20 and keep their characters after launch, with a purchase of the game and paid monthly subscription. Players who pre-order and purchase the game will also receive a “captain’s best friend” – known to any good pirate as a blue and yellow parrot – as well as a powerful weapon suited to their fighting style and an original game soundtrack CD complete with 60 minutes of pirate-themed music.