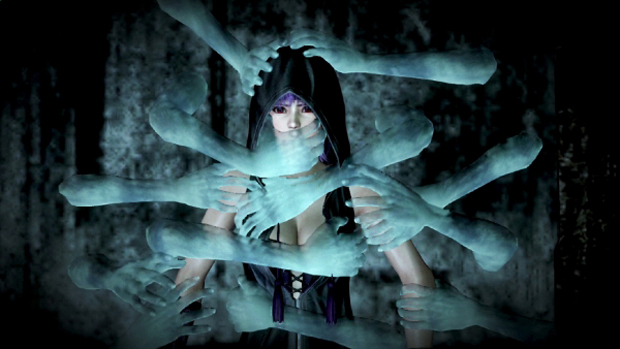 The Fatal Frame series has always been subtle in its use of sexuality, utilizing an undercurrent of vulnerability and otherworldly intimacy to give players a mix of softness and dread. Some of them play with sexual themes more than others (the sisters in Fatal Frame 2 got awfully close sometimes), but they’re never as overt as something like the Dead or Alive series.

That may be changing with the new Fatal Frame, which was just released on the Wii U in Japan (with a coinciding adorable live stream). Not only does the game have a new “wetness meter” that alters how much damage you can give and take out (depending on how wet your clothes are, naturally) but Ayane from the Dead or Alive series also appears in the game in an unlockable bonus chapter. Unlike the stars of the main game, Ayane doesn’t use a camera to fight ghosts. She appears to use some kind of purple laser thing instead. Maybe that’s why she’s doing such a bad job at not being grabbed by all those spirits.

So, managing your relative wetness and enduring ghost gropes are both a part of the new Fatal Frame. That’s the kind of game Nintendo of America would have likely passed on a few years ago. I wonder what the new Nintendo of America, the one currently publishing Bayonetta 2, will do with this sexually charged ghost busting thing?

Fatal Frame: Nuregarasu no Miko – Ayane from Dead or Alive will be playable [GoNintendo]