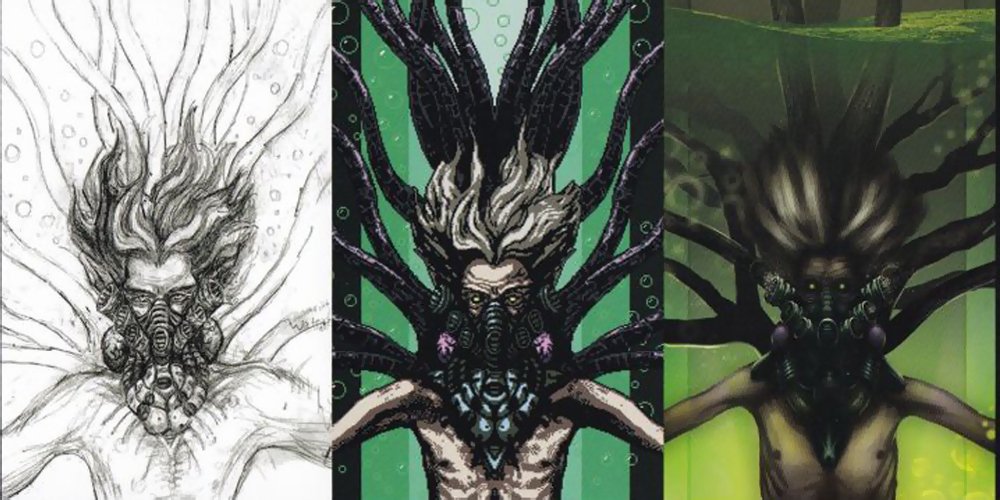 Real to a point that goes beyond entertainment

There were a lot of games I loved this year — Battle Chef Brigade, Cuphead, Ghosts ‘N Homunculi, GoNNER, Million Onion Hotel, Puyo Puyo Tetris, River City Ransom: Underground, Shovel Knight: Specter of Torment, Splatoon 2, The End is Nigh, The Mummy Remastered, and TumbleSeed are just a handful. It’s almost unfair to compare them to a game release that I’ll remember most from 2017, as they are all “just games,” where Axiom Verge Multiverse Edition is a multimedia package that’s able to share interconnected information with you through totally different avenues at once. Fair or not, it’s the data that goes into your brain that determines what you end up loving the most, and this is the data package that had the biggest impact on me this year.

If a spoiler is information that will make you like a game less if you gain said info beforehand, then my relationship with Axiom Verge has been rife with the opposite of that kind of information from the start. Knowing that the whole game was made by just one person led me to enjoy it far more than I would have if I went in thinking it was made by a team of hundreds. When you know a game came from one personality, hardwired into one set of synaptic connections, everything takes on a different meaning. You know that what you’re playing is, for better or worse, a direct download from someone else’s mind.

The making of the art book and documentary included in this retail release of the game provides even more inroads into the heart and soul of Axiom Verge creator Tom Happ, and it’s not always a comfortable ride. Tom’s process, his game, and his personal life are all mutually related and intertwined, bound together by a unified vision, shaded under a dark cloud of tragic irony.

In the documentary, Tom talks at length about how he was initially determined to become an astrophysicist, with the hopes of using the Big Bang as a starting point to later unravel the origins of life as we know it. Later, his focused swayed to computer science, and the realization that it would be possible to replicate a human brain with just pieces of paper.

It would likely take millions, maybe billions of pieces of paper to achieve, but still, realizing that the building blocks of existence are that commonplace helped Tom to understand that he didn’t have to look to the infinite reaches of space for the big answers. An organic neural network is just a computer, and a computer is just a series of switches that turn on or off. From there, it’s just a matter of flipping the right switches at the right time to create a consciousness, or maybe even a big bang of your own. The only difference between God and man is God is just a better programmer.

With the creation and release of Axiom Verge, Tom got to play God with a tiny universe of his own, an extension of his psyche from top to bottom. It was his virtual baby, and seeing his baby thrive in the highly competitive, failure-prone world of indie game development could have been a highlight of his life. Instead, the entire experience was thrown into disarray as his actual, real-life newborn son Alastair was stricken with a permanent neurological disorder called Kernicterus that would limit his ability to move for the rest of his life.

This kind of tragedy would be painful for any parent to suffer. For Tom, a man who has had the better part of his life guided by the idea that you don’t need to accept reality as it’s handed to you, the frustration and powerlessness must have been even more unbearable.

Axiom Verge is about, and was made by, the philosophy that everything is code, and therefore, anything can be hacked. If you learn to read, and later write, the language of DNA, you can become immortal. If you can decipher the programming that binds atoms together into solid matter, you could transform a dangerous predator into a harmless foot stool, or better yet, change your own atomic make-up and become intangible, passing through threats and obstacles totally unharmed. You just need to flip the right switches. You just need to be a better programmer.

These are the kinds of thoughts I imagine echoing in Tom’s head as he looks at his son, dying for the power to reach into his mind and fix whatever damage was done. As painful as those thoughts must be, they speak to the kind of thinking that a kid like Alastair will need to stay strong in the face of undeniable adversity ahead.

Fighting to accept yourself just as you are, while never giving up on getting closer to who you want to be, will be a struggle that the entire Happ family will be pushing against for the rest of their lives in one form or another, and I personally believe they are up to challenge. Tom may not be able to rewire his son’s synapses, but he will be able to teach his son how to be the kind of fighter who can survive, and even thrive, in the face of any hardship.

At one point in the documentary, Tom says that it felt uncomfortable when people started giving him positive feedback on his game. He says that Axiom Verge felt like a separate entity that he was not entirely responsible for, like a dream he had without asking for it. Having people compliment him on how well-made his dreams were made him feel strange.

It must feel even more strange for him to know that so many people have gotten to know him and care about him through his game, the making-of art book, and the documentary that runs alongside them. I’m just grateful that he was willing to do so. The Axiom Verge Multiverse Edition left a mark on me in a way that few games ever have.