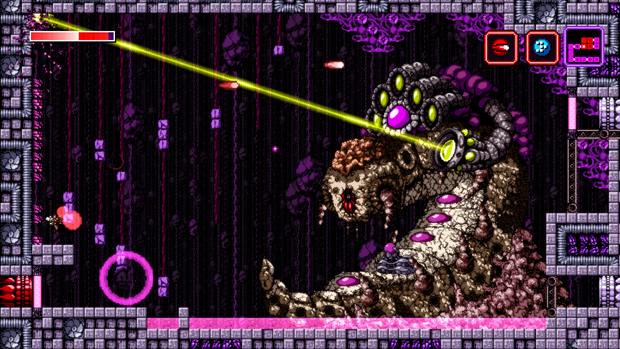 PS4/PS Vita first and then PC

A bunch of games we like were confirmed for PlayStation systems yesterday at a Sony indie event and the two that I’m most dying to get my hands on are Jamestown Plus (the original is possibly my favorite shmup) and Axiom Verge, which just looks crazy good and has for a long time. It’s so nice to see it return to the spotlight looking better than ever.

For years, this has been a part-time project for creator Tom Happ but Sony’s Pub Fund has allowed him to go full force ahead. Axiom Verge is now on for early 2015 for PS4 and PS Vita (with Cross-Buy), followed by a PC release a few months later. I quite like his description: “…[it’s] inspired by such classics as Rygar, Contra, Bionic Commando, Blaster Master, and, of course, Metroid. But it also gives you power over glitches like those found in classic games, allowing you to scramble enemies, corrupt environments, and enter hidden areas.”

The hope is to bring about feelings of our earliest memories of games, back when they seemed to be “magically limitless,” says Happ. “It might be that a game only had a set number of areas and tight constraints on what you could do, but for all you knew, the world continued past the edges of the screen, if only you could figure out how to get there.”

Yeah. Really feeling this one. I mean, just look at this: