On Steam this week

Axiom Verge releases tomorrow on Steam. If you’ve read my review of the game from its earlier PS4 launch, you already know that I think it’s a solidly designed exploration-based platform title. I’m happy to report that it’s just as good on PC. Hell, it’s even better, thanks to the addition of a feature that directly addresses one of my all-time exploration pet peeves.

One of the little niggling problems that I had with Axiom Verge relates to its in-game map. I have problems with lots of in-game maps. Despite being a tool that the player will make constant use of throughout a game, they don’t usually get the kind of attention necessary to make them truly useful. If you’re like me and find it easy to get turned around, especially in games where corridors all blend together visually, a good map can be a tremendous time saver. 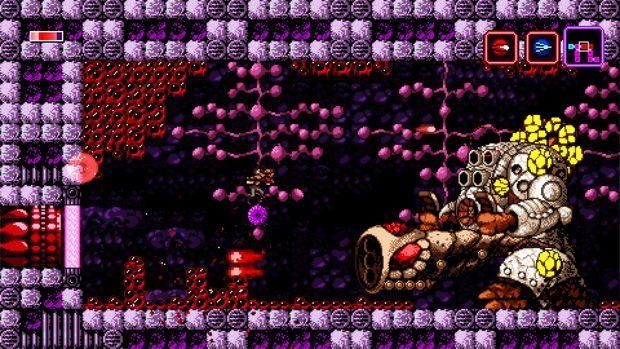 Axiom Verge‘s map is not great; it meets a standard. Using a grid-based design common to metroidvania games, the map is useful for general route planning and (by carefully examining borders) identifying rooms that haven’t been fully explored yet. That’s about the limit, though, and in a game where the player frequently comes across rooms with obvious alternate routes requiring a future ability, it would be nice to have a map offer a little more.

The PC version does this. It adds the capability to place a marker in the block of the map the player currently occupies, useful for reminding you of a location where you spotted a power-up you can’t reach yet or a path you want to return to. Even having finished the game a few times already, I found it really helpful for keeping track of where I knew I’d need to go next. The feature is limited to allowing only two markers on the map at any one time, but that the map even offers a second player-defined indicator is something of a rarity.

If I had my druthers, every in-game map would provide some means for the player to mark it up with information they’ve acquired through play, but that will never happen. As small as thing as it probably seems, this kind of feature would absolutely impact my purchasing decision if I were on the fence between the console release and the newer PC version.