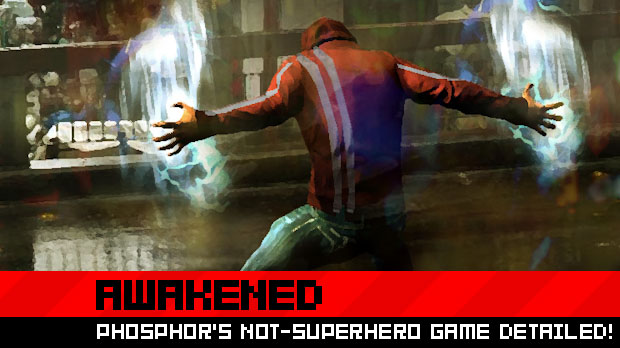 Awakened has caught some eyes since Phosphor Games rose from the ashes of Midway and turned a canceled game into a living, breathing project. The game is about creating your own protagonist with unique super powers, and it’s already captured our imagination. There’s no denying the ambition on display.

Many outlets have contacted Phosphor to know more, but Destructoid has the scoop. We were very lucky to chat with the team about their new game, as well as nab a selection of the latest screenshots. So who do you want to be? Somebody who knows all about Awakened, or a chump? 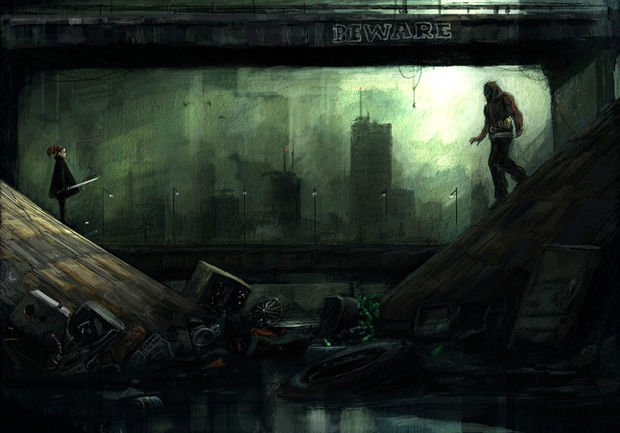 Awakened actually started life as Hero, a project at Midway that was, sadly, fated to go down with the ship when the publisher tanked in 2010. Unlike most canceled games that fade into obscurity, however, Hero was rescued by the newly formed Phosphor Games, who turned it into Awakened.

“It is interesting because a few of us on the team worked on the PC RPG SepterraCore waaaay back,” explains Phosphor’s Chip Sineni, “and ironically that was a game that was developed at Viacom New Media (owned by Sumner Redstone, who later became Midway’s largest shareholder, and whose share sales instigated the bankruptcy of Midway). When Viacom New Media went under, the property was purchased and the original team continued to develop it (which was published by Monolith, who is now [part of] Warner Brothers). So we may have been over-optimistic that lightning would somehow strike twice and come back and help us.”

The lightning, sadly, never showed up. Bankruptcy proceedings at Midway were too chaotic for publishers to do anything but register their interest. However, the Hero team was undeterred, and after working closely together for over two years, decided to stick around and remake the game. They started again from scratch and called their “new” game Awakened.

So what is Awakened? Phosphor Games wants it made clear that it is not a “superhero” game. Yes, the players will have access to a wide range of super powers, but this isn’t inFamous, Prototype, or Superman 64. Phosphor’s aim is to have personalized, grounded characters who just so happen to have unique abilities.

“An easy way to think of it — picture the GI Joe character Snake Eyes, or the Cyber Ninja from Metal Gear (Grey Fox),” offers Chip. “Those are characters with very specific skills, not superhero-ish, but very distinct abilities. If you want to specifically role play as them in a commercial action adventure title, there may not be a way for you to do that. Again, it isn’t superhero, it is really making anyone with unique skills — Neo from the Matrix, The Bride from Kill Bill, Tifa from Final Fantasy, Kate Beckinsale in Underworld, Firefly from GI Joe, etc.” 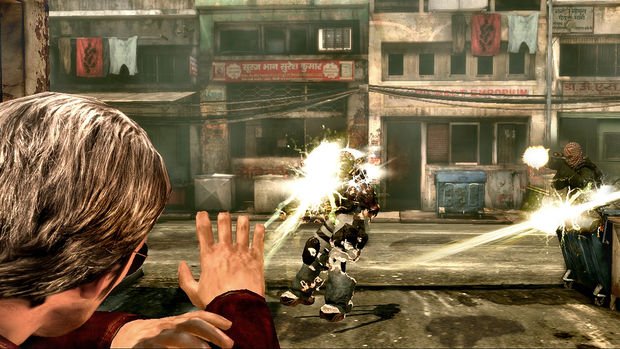 The early concept trailers have shown characters with all manner of awe-inspiring powers. Teleportation, pyromancy and invisibility are joined by ludicrously god-like skills such as the summoning of tsunamis and the creation of colossal whirlwinds. Phosphor is still working out exactly how many powers are in the game, and is still striking the balance between players not having enough and having too much.

Phosphor found that while prototyping the game, it became too boring if you were uber-powered and able to access a huge range of abilities. Their goal is to strike a balance that makes your character feel important and individual. If you ever feel you’ve made a wrong choice or you just get bored of being able to turn your skin as hard as rock, Awakened will featured the option to re-spec your characters, but it will come at an as yet undetermined cost to the player.

As well as super powers, there will be a range of firearms and melee weapons, since, according to Phosphor’s research, players demand guns n’ ammo. If you don’t want to make use of any conventional human weaponry, the game will not force you to. It’s entirely possible to create a character that fights using only innate abilities, but if you want to start shooting and swinging a sword, the option is always there.

“The important thing for us as developers is that we make sure if you love guns, that our stuff feels as good as all the other action games,” reveals Sineni. “In create-a-player MMOs, guns don’t feel anything like an action game. We also think a lot of players will want to make characters that are tweaks of other characters they are familiar playing with — a Master Chief that can teleport, a Nathan Drake that can turn invisible, a Kratos that has rocket launcher, etc. Characters can be pretty simple, maybe … even [have the] same skills but a different look — a character who plays like Solid Snake, but looks more like Voldo from Soul Calibur.”

Awakened‘s melee combat aims to provide a brutal intensity, a feeling that you’re up close in the fighting rather than “playing with action figures.” Phosphor notes that many games feel this way, with a sterile disconnect from the player. Awakened wants its combat gritty, personal and violent. Once again, however, the game won’t “gimp” you if you choose to ignore melee combat altogether. Choice is the name of the game, and the idea is that you can be anybody you want. 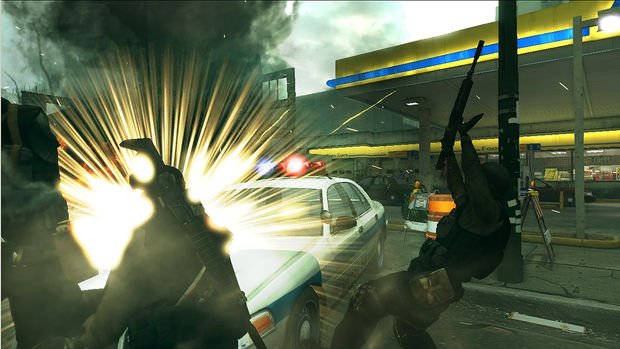 “We are spending a lot of effort focusing on player choice for gameplay style — play the game how you like,” we’re told. “Like, if you want to be the kind of guy who hangs back and assassinates targets, then pick long-range skills and invisibility, etc. Look for vantage points to nest and camp.

“Maybe you want to be a brute-force machine gun guy, somebody who just barges into battle Duke Nukem-style, and you hate taking cover, so you bulk up on heavy weapons and shields. Somebody else might be more of a ‘military Batman gadgeteer’-style character and pick a variety of more cat-and-mouse-style stuff to ensnare enemies, toy with them before killing. We really want players to play the game as they like, with a character they created. So the world has to be hand-crafted to take advantage of different play styles and player abilities.”

Awakened‘s early trailer hints at a potentially dystopian society, overrun by the military, where those with super powers are hated. Phosphor is keeping the overall premise of the game a secret, but has promised a compelling story — at least something more compelling than we’ve seen from similar titles.

“We are keeping the plot close to our chest for now,” teases the studio. “We are a big fan of J.J. Abrams’ ‘Mystery Box.’ It seems most interesting to just start the world fairly blank to players, and just see stuff unfold. We’ll share more as we get a bit closer to release. Right now it is just too early to discuss.

“One of the biggest lessons learned in prototype was how hard it was to have compelling player motivation and situations when you had no idea where the player was, how they got there, or what skills they had. There was no situation to optimize to, so a lot of the story and events had to be generic to account for anything.

“The kind[s] of games our team plays usually have a compelling story. No cutscenes between action, but story happening with everything you do. BioShock is amazing like this: the story is really what is happening in the player’s head as they are playing — it is being fed by the narrator, the environment around them, the enemy situations; everything the player does is a story. No offense to Crackdown, as it is a really fun game with very addictive mechanics, but the story in the player’s head is, ‘Can I make that jump? Can I reach that orb?’ It is all very abstract, not really narratively motivating, and scenarios repeat a lot with variations in difficulty: ‘That jump is even more difficult … now there are even more enemies.’ It is a really great, pure design that has hooked many people (including our team!), but it doesn’t really showcase what a custom character would do in different situations.” 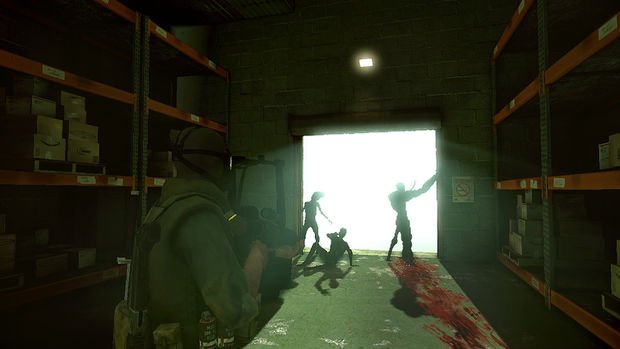 As well as a single-player narrative, Phosphor promises that multiplayer will be a huge part of the game, with several layers offering quite a few options. The most basic and obvious mode is ranked competitive matchmaking. Here, you can pit your best character around the world’s finest, which Phosphor claims will take “CoD player perk-style customization to a whole new level.”

More intriguingly, however, is the ability to create your own multiplayer modes. Players can organize matches in which every player has access to a predetermined set of skills, in order to shape the kind of game you want. Superheroes vs. supervillains, military vs. insurgents, pirates vs. ninjas — whatever kind of fight you want to organize, you can organize it. Although this mode won’t be ranked, it sounds like it will be a lot of fun — you could even make eight generic mook-like characters armed with guns and little else, and pit them against one player who has super powers.

“But also we will have some simple option rules, like ‘switch sides on death,’ ‘inherit enemy skills on death,’ etc. Just with a few simple switches, players can start making their own game,” says Chip. “Like, you could have seven Space Marines versus one alien, but if the alien kills one of them, they become an alien and you get a ‘and then there were none’ alien game. This would work for a zombie, vampire, or whatever — when players can change their look and skills, then really they can make their own MP game.”

So far, what we have seen of Awakened is rather rough, and Phosphor knows it. The trailers shown are still from very early builds and there is a lot of work to be done.

“The videos are super rough,” confesses the studio. “Yes, this is all very early stuff — especially animation, melee, et cetera — it was very stilted and stiff. I’ve seen people on forums ask, ‘Well then why did you release the videos?’ and the answer is we never did! We shared the concept teaser with many publishers, and somehow they got posted on sites. We still have never posted any of the trailers floating about; they just got up there.

“We are using Unreal 3 technology — Epic has the best engine for everything we want to do. The new tech they have been rolling into it almost makes it feel like a new hardware generation.” 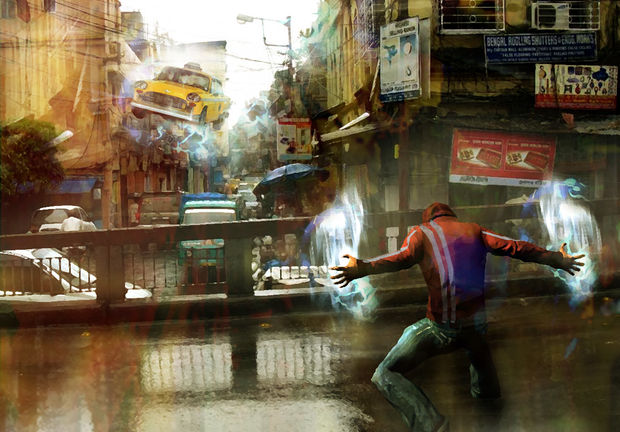 Awakened is still without a publisher, but with so much buzz already building around the game, it’s doubtful the company will go too long without several bites from interested parties. The compelling customization, the flexible combat, the infinite scope of the multiplayer and, most importantly, the passion of the team all seem like strong indicators of a game with serious potential. Phosphor Games clearly understands its inspirations, its audience, and the crafting of a not-superhero-but-people-with-super-powers game. All that remains is for it to be made!