If we’re nitpicking, it should be called ‘Audiowakeboard’

Formerly known as Audiosurf Air, Audiosurf 2 made an appearance at PAX Prime 2013’s Indie Megabooth, and the team was really pushing the new wakeboard mode, wearing life vests and adorning the booth with a custom board.

After visiting with the developer and having a go with the wakeboard (on a Björk song, because *swoon*), I can say that a lot of the trepidation that the community expressed after the first trailer showed up was unnecessary. Not everybody will like the wakeboard, but thankfully for those, there is more on offer with Audiosurf 2. 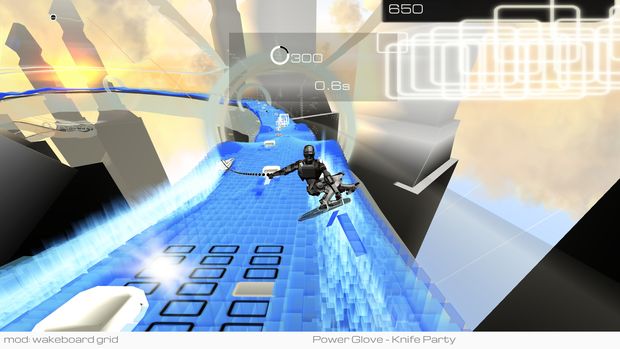 The initial new element worth noting is that there has been a pretty substantial graphical upgrade for Audiosurf 2, but that works against it a bit, where the flashier graphics distract from the action and end up harming the experience when compared to Audiosurf‘s cleaner look. However, custom skins will be available, so this may not end up mattering once the game releases.

For Audiosurf veterans, the wakeboard is basically Mono from the first game, where the main task is to collect any colored gems and avoid greys, which are now shaped differently so the two are easier to differentiate. Gem density decreases in the softer uphill sections, and increases in the more intense downhill sections.

Adding to the simplest of the Audiosurf vehicles to create the wakeboard is the air mechanic that once informed the game’s title. On the wakeboard, the highway is viewed from first person while the player is towed behind two boats traveling along the edges. At certain intervals during the song, small wakes will appear on either side of the track. By holding left click, the camera moves back into third person to prepare for a jump. Moving the wakeboarder to one of the edges and letting go of left click will launch him into the air.

On a flat section, doing this will result in a modest jump with less than a second of airtime, but the trick to catching an absurd amount of air is to execute just before a drop–essentially, it’s best used after a slow build up to an intense section of music. 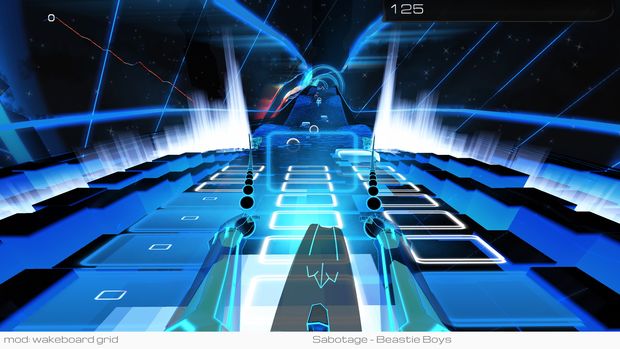 On the water, collecting gems and avoiding grey balls builds up a multiplier, and making a jump spends the multiplier. While in the air, the mouse wheel can be used for front flips or backflips, and holding the right mouse button allows for barrel rolls, each adding more points.

Some of the wariness that fans expressed stemmed from the idea that the air mechanic basically allows the player to bypass the more difficult, technical sections of a song. While that is true, it is surprisingly satisfying to pull off a big jump, as it takes real knowledge of the song’s ups and downs and a good feel for the music to get the timing just right. That said, those who would rather eschew jumping altogether can remain firmly planted, only collecting gems just like old times.

The real good news for fans of the original game came from a brief discussion with the developer. The whole point behind changing the name from Audiosurf Air to Audiosurf 2 is that there will be many more vehicles than just the wakeboard shown, each having its own special rules and functions. Audiosurf 2 opens development up with Steam Workshop, allowing the community to modify and create skins and vehicles.

The greater freedom afforded in Audiosurf 2 is apparent in the recently shown Audiosprint prototype. In addition to minor tweaks like color palette and camera angle, Audiosprint mode gets rid of gem collection entirely and takes on what looks more like an endless runner than traditional Audiosurf.

I came out of the PAX demo for Audiosurf 2 with much higher hopes for the title than when I went in. Though the graphical effects are a bit overdone, they can be toned down. The air mechanic provided by the wakeboard vehicle feels surprisingly great, but even those who don’t want it can find — or even build — a different vehicle more to their tastes.