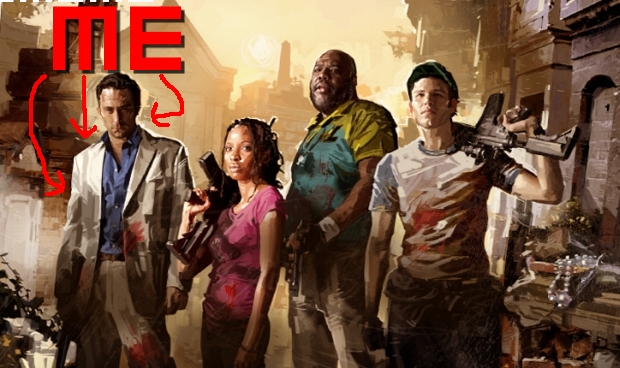 Just in case you haven’t tried out the Left 4 Dead 2 demo yet, know this: it’s good. After I finished writing a three-page diatribe on how the 24 hour delay for the PC demo incontrovertibly proves that Valve hates its customers and is, in fact, a Nazi corporation whose evil surpasses even that of Bobby Kotick’s House of Baby Eating, I found myself truly enjoying the new weapons and the final “gauntlet” sequence.

And that can mean only one thing: it’s time to start calling dibs.

Last year, I pre-emptively called dibs on Bill. In the months that followed the original Left 4 Dead‘s release, such dibs-calling served me well: I played as Bill more often than I did not, and the world was a better place for it.

With that in mind, I state the following: I have dibs on Nick.

My first time through the demo, two of my companions died on the way to the safe room. As Coach and I finally shut the door behind us, Nick triumphantly muttered, “Well, at least I made it.”

I can respect that.

I don’t have to like it — I don’t necessarily agree with it, or condone it — but I respect it. In a series so famous for encouraging cooperation amongst its players, Nick is a character who seems dead-set against that very behavior. Sure, Francis initially seemed like he might be an asshole in the first Left 4 Dead, but got the more you played alongside him, the more apparent it became that he was just a cuddly phony with a vest and a goatee. By the end of Crash Course, even Louis pokes fun at him without consequence. I dunno if I see that happening with Nick anytime soon, and that interests me (especially when considering how comparatively kind the rest of the survivors appear to be).

It is an understood law of the universe that if you have a character who is kicking large amounts of ass, they will look immeasurably cooler if you put them in some kind of suit. How memorable would the Reservoir Dogs be if they’d been wearing sweater-vests? How boring would the protagonist in The Killer be if he hadn’t been able to run around in a suit and tie for most of the flick?

Actually, I would pay good money to see Reservoir Dogs in sweater vests. But that’s not the goddamn point.

Like it or not, the contrast between classy clothing and decidedly non-classy violence is, and shall probably always be, really goddamn cool.

“Yeah, the guy wearing the $4,000 suit is holding the elevator for the guy who doesn’t make that in four months. COME ON!”

Just in case it’s been more than forty-eight hours since you watched Left 4 Dead 2‘s opening cinematic, watch it again. You may notice a few new things. You might find that Ellis, for instance, seems to be the only survivor who ever gets pounced, or jockeyed, or smokered, or anything-ed. You may let out a small chuckle as you consider the fact that Coach, after tossing away the official instructions, begins to take a bite out of a chocolate bar.

Or, you may notice the fact that every single line that comes out of Nick’s mouth is the coolest motherfucking shit ever said by anyone.

Seriously, watch it again — with the possible exception of his exclamatory “Shit!” when Ellis gets attacked by the Jockey, every single word that exits Nick’s mouth is immensely quotable. The line about the chocolate helicopter is great, but his gravel-voiced delivery of “looks like there’s been a change of plans” is one part Solid Snake and three parts kicking God in the testicles.

Not to mention that you cannot, under any circumstances, convince me that you don’t get chills when he growls, “I have not…come this far…to die now.” Hell, just typing it gets me to half-mast.

Possibility for a character arc

When one considers Valve’s (admittedly vague) promises that Left 4 Dead 2 will include a slightly deeper story than the first game, Nick’s relationship to those promises become very interesting. As there will allegedly be more narrative cohesiveness between the five campaigns, I wonder if we’ll eventually begin to see Nick become less and less of a selfish asshole as the game goes on.

Of course, “asshole secretly has a heart of gold” is about the most cliched character arc in the history of character arcs, but still — unless  Coach finds a treadmill and Ellis graduates college in the time between “Dark Carnival” and “Hard Rain,” Nick strikes me as the only survivor who could potentially undergo a significant change from the beginning of the game to the end.

Somebody’s gotta keep that rambling, ign’ant, trucker hat-wearing, punny shirt-having, “kill-all-sonsabitches-that’s-MAH-official-‘nstructions” schmuck in line, and it might as well be Nick. I’m sure Ellis will eventually grow on me — his “head-sucking” monologue admittedly made me chuckle — but I need to illogically and unapologetically hate at least one of the survivors, even if only for a few months. With Left 4 Dead, it was Francis. For Left 4 Dead 2, it’ll be Ellis.