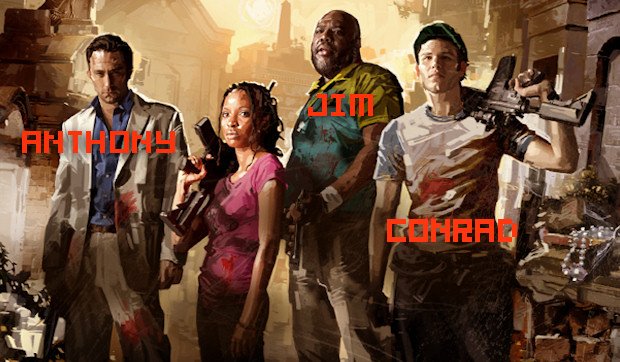 Last year, when Destructoid’s staff laid dibs on the survivors in Left 4 Dead, I saw things in Francis that nobody else did. They were so quick to write him off as the least desirable survivor and that simply was not the case. I still feel confident that I made the right decision and Francis was my partner for most every game I played.

Now that I have watched my associates unnecessarily malign Ellis, I once again feel compelled to not only defend the underdog but to show why he is clearly the best possible choice.

I have dibs on Ellis.

He’s the most physically prepared.

Just looking at the way he’s dressed can tell us a lot about Ellis’ preparedness for the end times. For example, he’s the only one wearing a hat. A hat is an essential item to have in the event that you should have to survive in the wilderness, as it’s likely our survivors will have to do at some point. Nobody needs a sunburn on their face and the brim’s shade would give an advantage in bright daylight.

Also, it’s a well-established fact that rednecks love firearms. Ellis has probably had more than a little bit of experience using them and likely more than anyone else in the game. I can’t count the number of times I’ve heard a redneck say something like, “when the shit goes down in this country…” or ” when the revolution comes…” so my keen sense of stereotypes tells me that he has a plan of some kind. Hell, he may even have belonged to a militia.

Ellis’ knowledge of armed combat may not be as extensive as, say, Bill from the previous game. Of the four survivors in Left 4 Dead 2, however, his cultural background would seem to place him at a bit of an advantage over his compatriots. Of course, just having the best awareness of firearms isn’t enough to survive. Guess it’s a good thing for Ellis that…

He’s also the most emotionally prepared.

When your life before the zombie apocalypse consists of living in a trailer park, you aren’t taking as much of a step down. If you don’t have anything to lose, it’s much easier to walk away. Ellis doesn’t have to deal with any concerns about how the whole world is going to hell. His prior existence probably did not look much less bleak than this one.

Nobody has a better attitude toward all of this than Ellis. He cracks more jokes in a lighthearted manner than anyone else and seems determined not to let the end of the world get him down. That’s the kind of person I would want to be in the zombie apocalypse. Which ties into my next point…

How can you not like Ellis? While Coach might be more cuddly due to his size, Ellis is the guy everyone will want to hug. There’s an odd inquisitiveness about his character which appeals to me, like a babe shoved out into the world who can’t see its ugliness yet.

Yeah, he can be a bit of a doofus, but Ellis is really quite charming in his own way.  He may not be the brains of the outfit but he strikes me as a loyal, stand-up guy. When the chips are down, I know that Ellis will be there to help. I’m not so sure about the other survivors. And that’s because…

Didn’t you see how eager Ellis was to get hit by nearly every special infected possible in the introductory movie? That man has balls of steel to allow himself to get caught in all those situations just to give his fellow survivors a better chance of survival. What a nice guy!

Of course, there’s always the possibility that I’m wrong and he’s not the selfless hero I think him to be. Which makes it a good thing that…

I’m not saying that there’s going to be any sort of cornholing going on in Left 4 Dead 2. All I’m saying is that we’re in the South in a desperate time and anything could happen. If it’s going to, I’d much rather be the guy who seems likely to be performing said cornhole.

And Nick does have a purty mouth.