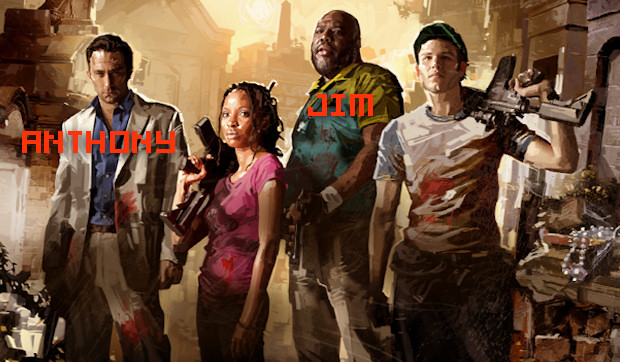 Left 4 Dead 2 is really bloody good, and if you don’t agree with me then you’re an IDIOT who deserves to be split in twain from testicles to cranium and then fed to your own imprisoned family. My colleague Anthony Burch agrees with me, and just the other day laid claim to Nick, one of the game’s four playable characters.

A fair and noble choice, certainly. However, one man’s trash is another man’s treasure, and while Burch was quick to jump on the suit-wearing, wisecracking pretty boy, he ignored the true prize of Left 4 Dead 2. Yes, as you all groan and grimace, we are doing this whole “dibs” thing again. So sit down, shut up and pay attention as I tell you morons why, just like last year when I had dibs on Louis, I’ve now got dibs on Coach!

Coach punches zombies in the face, beating them to a bloody pulp with the butt of his shotgun while shouting, “This used to be a nice neighborhood.” Yeah, Coach is a badass. A chocolate-eating, Bible-quoting, zombie-whupping badass. His no-nonsense, cynical attitude to the zombie apocalypse is one I can respect.

Coach also has a personal hatred for a number of the Infected, most notably the Witch, although no reasons are given as to why just yet. All I know is that a man who dares to have a grudge against the Witch, of all things, is a serious hardcase, and should not be messed with. Coach definitely is the most badass of all the new Survivors.

The first thing that anybody ever said about Coach when they saw him was that he looked like Uncle Phil. Since Uncle Phil (that is his real name) is one of the most awesome men to have ever lived, anybody who looks like him must have at least some small shred of awesomeness within themselves. None of the other Survivors look like Uncle Phil, ergo Coach is superior to all of them.

Uncle Phil is awesome because he voiced Shredder in Teenage Mutant Ninja Turtles (heroes in a half-shell). Shredder would kick ass in a zombie apocalypse, and using a little something called logic, I have decided that Coach is as powerful as Shredder and so has a better chance of surviving the Infected than anybody else. He has a freakin’ Technodrome! I’d like to see the Tank stand up against that!

It’s a generally accepted theory that the fatties will be the first to go during a zombie apocalypse. Since I myself am a bouncing fatty pigface, I’m given a great sense of comfort by the fact that Coach is, himself, an overweight man who has trouble climbing the stairs. The fact that he has managed to survive the apocalypse makes me feel so much better about the fact that I have tits, therefore am supposed to be among the first to die when the dead rise again.

It’s natural that I would gravitate toward Coach, and not just because we’re both so fat that we’re drawn to each other through the laws of physics. I identify with him, and know that I too would hate stairs and be too wobbly to run away from zombies properly.

Possibility for a character arc:

Anthony argues that Nick has a possibility for a character arc, and that’s fine. I argue, however, that Coach has an even better possibility. As Valve stated, there will be a little bit more of a cohesive story this time around, and hopefully the four survivors will get to show a little more of their personalities and backstories. I think Coach may have the most compelling of all.

We know he used to coach a football team, and that he eventually went into teaching. As a forty-year-old man with a stable job and a clear need to avenge the “nice neighborhood” mentioned in the opening cinematic, it’s reasonable to assume that Coach, more than any other Left 4 Dead character, has lost a family. His deep-seeded hatred of Witches may very well be tied into that. Perhaps a Witch was to blame for the loss of his family, and he’s now possessed by a need to take out his loss on the Infected.

I dare say it will be interesting to find out why Coach hates the Infected more than the average survivor, and I am most definitely eager to see it unfold.

Not picking Coach makes me a racist, a fattist, and and ageist:

Coach is black, overweight and old. That’s a triple-whammy of prejudice and I’m not prepared to board the bigotry train.

He’s the one with the chainsaw:

Seriously, though. Coach is the one seen with the chainsaw in all the promotional material, and he knows how to use it, as evidenced when he cuts a zombie’s head and arm clean off to rescue Ellis. Chainsaws are brilliant, and only the cool cats, like Ash from Evil Dead, get to use them against the forces of the undead. You can keep your nightsticks, baseball bats, frying pans and guitars. I’ll take the big whirring metal thing full of rapidly rotating teeth, thanks.

Coach has a chainsaw. You do not. Coach is wins at zombie apocalypses.

A hillbilly hick that looks a bit like Lee Evans and gets Jockeyed, Chargered and Smokered all in one cinematic. Yeah, I’ll pass on that. I get enough ig’nant, trucker hat-wearing, punny shirt-having, “kill-all-sonsabitches-that’s-MAH-official-‘nstructions” schmucks where I live, and I don’t need to be reminded that they exist in my videogames. Very much like Anthony, I don’t think he’s really that bad, but we need somebody to hate on, and Rochelle doesn’t seem to have enough personality to dislike, so it might as well be Ellis.