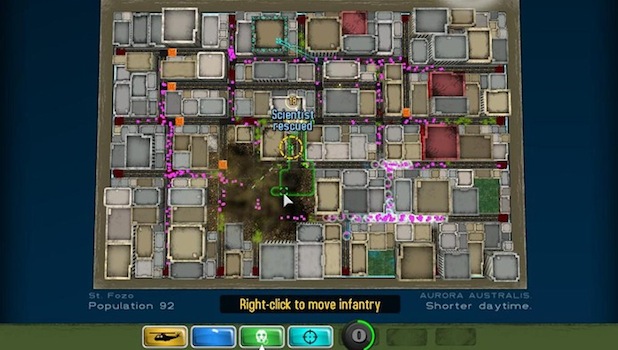 The Humble Indie is just the gift that keeps on giving. As of today, you can get Atom Zombie Smasher as a second bonus game, meaning you’ve now got seven games in the bundle. Now I know you’re thinking “Oh no, another zombie game” but Atom Zombie Smasher is a great little title.

I picked up Atom Zombie Smasher in the Steam summer sale a few weeks ago and I’ve really been enjoying it. It’s a deceptively simple-looking game but there’s plenty going on. Your main objective is rescuing civilians from “zed” infected cities using a fleet of choppers whilst also mowing down the infected hordes with snipers, mercs and even an orbital llama cannon. Each mission only takes a few minutes to play so you can do a campaign in a fairly short time. Mod support and a range of gameplay options, plus a super cool surf-rock soundtrack and offbeat sense of humour make Atom Zombie Smasher a great title, even if you’re burned out on zombies.

So let’s recap: that’s the five original games, plus Steel Storm and now Atom Zombie Smasher. So that’s seven games, plus if you spend more than the average contribution you’ll get the original five titles from the second Humble Indie Bundle! I’ve already got nearly all of these games, but I’m considering buying some packs and gifting them to some non-gamer friends so they can see what they’re missing.